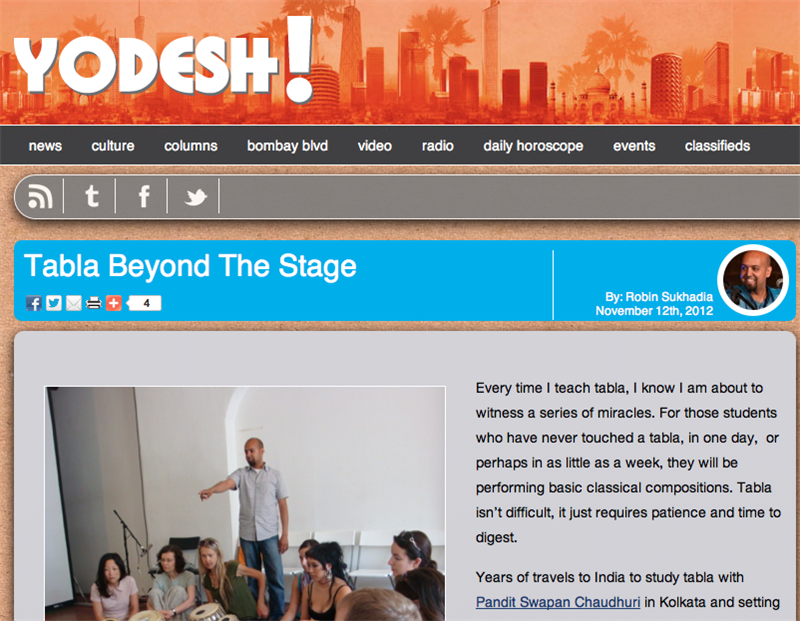 Every time I teach tabla, I know I am about to witness a series of miracles. For those students who have never touched a tabla, in one day, or perhaps in as little as a week, they will be performing basic classical compositions. Tabla isn’t difficult, it just requires patience and time to digest.

Years of travels to India to study tabla with Pandit Swapan Chaudhuri in Kolkata and setting up music schools for street children there, helped me to refine my own approach to teaching. The educational system in India, emphasizing memorization and repetition, gives little importance to creativity. Especially in the school systems serving the poor, asking questions, experimenting, and validating one’s own ideas is seen as an affront to authority. I decided early on in my study of tabla to encourage critical thinking and improvisation, so that the instrument and its language are more easily accessed by beginners.

Here in the USA, integrating creativity into learning tabla is even more crucial.

I have been coming to Eagle Rock School in Estes Park, Colorado, periodically to teach tabla for the past ten years, and have taught Tabla Explore Week here seven times. Sitting on over 640 acres of land in the foothills of the Rocky Mountain range, Eagle Rock School is an example of what education should be. The school serves students who have been deemed unfit to graduate from high school. The highest quality tools and teaching methods, and a deep focus on community service and nature, however, make graduation a possibility for every student.

Tabla Explore Week is an intense week-long immersion into tabla and the historical and cultural context that surrounds it. For the students of Eagle Rock, all who have faced the possibility that they will not graduate from high school, thinking critically outside the box is vital for their success. Tabla, with its unique approach to language and rhythmic architecture, enables them to do that.

A very deep art form, tabla on the surface looks deceptively simple: made of wood, animal skin, and the mysterious black spot that resonates to create its magical tones. But the drum is actually an extension of the rich hybrid culture that has evolved in North India/Pakistan/Afghanistan over centuries of time. The sound and structure of tabla holds within it the languages, history, spiritual worldview, and oral traditions that have made South Asia among the most resilient and dynamic cultures on Earth. By touching a tabla, a student or master touches upon all of these facets of South Asian culture.

During Explore Week at Eagle Rock School, students learn to play tabla from scratch, and by the end of the week will perform memorized classical compositions for the entire school. They come into my class on day one with much to overcome. None of the students have a South Asian or Asian background. Few have ever heard of tabla. Many come from the toughest and most violent neighborhoods in the US. Almost all have significant issues of abuse, addiction, low self-esteem, and traumatic experiences with violence that they are working hard to overcome.

The Tabla Explore Week Classroom in 2009

Before even touching the drum, they learn to recite its language. Over the course of the week, they learn to be patient, to open their ears, and to work together. They learn about the history and the socio-economic issues of South Asia that are affecting the world. They listen to ragas, and learn to understand their structure and meditative power. They learn to present complex knowledge at the end of the week and perform compositions that they arrange and perform themselves.

Most of all, they learn how tabla connects to the modern world. Each time I teach the class, I try to incorporate a contemporary connection. This year, I focused on the art of sampling and beat-making. Throughout the week, students captured the sounds of Eagle Rock School using wave recorders and mobile phones: faculty laughing; students shoveling dirt as part of a service project on campus; pencil sharpeners in the library; the sound of the gravel underfoot while walking up to the cafeteria; even the sound of water drops. The students mixed those sounds with homemade hip-hop beats using an Akai MPC1000 drum machine/sampler. These fresh sounds were then layered into tabla compositions to create a wholly new sound and emotion. Students saw (and heard)—first hand—that even ancient sounds can and should have a role in the present.

The idea to integrate tabla with the contemporary began when I brought my friend Walter Kitundu out to Explore Week with me in 2004. An instrument inventor, turntablist, and bird photographer, Walter added imagination and instrument invention to the traditional tabla class. Daily, Walter would lead the students in creating instruments themselves out of wood and recycled materials. Walter taught the students to use a special improvisation technique called conductions to integrate the sounds of new instruments with the rhythms of tabla.

What is a Conduction, you may ask? Invented by Butch D. Morris, Conductions are soundscapes built through improvisation and hand gestures, all led by a Conductor. No words are spoken, but everyone has a role in contributing to the overall piece. It works beautifully for Tabla and for the students because Conductions enable rapid creativity and ideas to take shape through sound. No two conductions are the same, and the students must learn to work together to create something compelling.

In 2008, my wife Neelanjana Banerjee and I taught Tabla Explore Week together, incorporating creative writing and storytelling. We called the class Tabla, Sampling & Wordplay. Each day, Neelanjana led the students in a wide range of writing exercises. A major focus of the class was using writing to address issues of trans-nationalism and identity. Listening to ragas was accompanied with journal writing exercises. That year, the conductions featured recitations of poetry by students. The language of tabla was connected rhythmically to the language of poetry and used as a lens to discuss the history of migration and identity in South Asia and the US.

This year’s class was especially strong and unique. I was able to incorporate a whole new level of information for the students, after having spent over one year in India on a Fulbright. I invited guest artist Sheela Bringi, an LA-based talented Indian vocalist and bamboo flute artist, to deconstruct ragas for the students.

The way I teach tabla resembles the intensive way I learned tabla myself, from my teacher Pandit Swapan Chaudhuri. I focus on recitation, grammar, classical compositions, and going slowly to digest complex ideas. But I take the instruction a step further to make the information more relevant to students who are living and learning in contemporary times and with contemporary influences. I believe that in order for this instrument, this art form, to continue to live that we need to honor how innovative it is. Sampling, wordplay, electronic music, hip-hop, multi-media, improvisation, experimentation, and discussion supplement the core of how tabla has been taught for centuries.

Tabla, a product of all the cultural traditions and religions it was nurtured by over the centuries, has always been treated as sacred. As such, deep rules form the basis of the way it is presented, learned, performed, transmitted, and how it is accessed. For centuries, not just anyone could learn the instrument: you had to be born into a family of tabla players; you had to be a man; you had to be in service of the ruler or king. With the break down in the feudal and colonial system across south Asia in the 1940s, the instrument which had been sheltered by the elite found new voice in a more open society. Tabla’s liberation from this system of learning and performance is relatively new, just 100 years or so old. Its place here in the west is even younger. Artists like Pandit Swapan Chaudhuri, Ustad Zakir Hussain, Ustad Allah Rakha and many others made the instrument accessible to western audiences from the 1960s onwards.

Now, in 2012, performers, listeners, and students are asking for tabla to be re-contextualized in its new present day environs. Reforming the way tabla is taught and to who is playing a central role in that re-contextualization. The core of the instrument, its grammar and its depth, cannot be altered. But the way it is presented and digested can and should be modified. This new generation of players includes more women, more non-South Asians, and more integration with electronic music. The future is going to sound incredible!

My student Kanchan (center) performs on tabla at the Gandhi Ashram in Ahmedabad, India – 2011 (Photo by Neelanjana Banerjee)