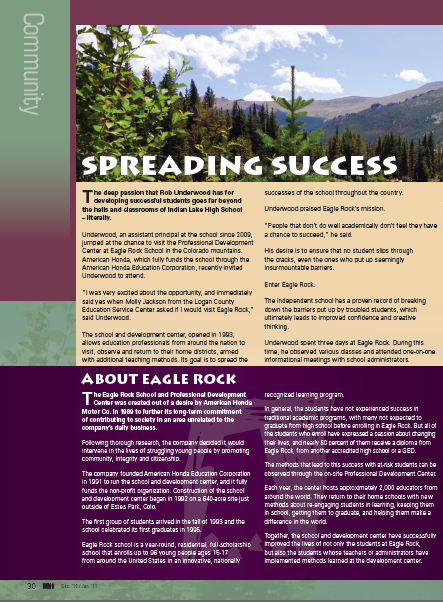 The deep passion that Rob Underwood has for developing successful students goes far beyond the halls and classrooms of Indian Lake High School – literally.

Underwood, an assistant principal at the school since 2009, jumped at the chance to visit the Professional Development Center at Eagle Rock School in the Colorado mountains. American Honda, which fully funds the school through the American Honda Education Corporation, recently invited Underwood to attend.

“I was very excited about the opportunity, and immediately said yes when Molly Jackson from the Logan County Education Service Center asked if I would visit Eagle Rock,” said Underwood.

The school and development center, opened in 1993, allows education professionals from around the nation to visit, observe and return to their home districts, armed with additional teaching methods. Its goal is to spread the successes of the school throughout the country.

“People that don’t do well academically don’t feel they have a chance to succeed,” he said.

His desire is to ensure that no students slip through the cracks, even the ones who put up seemingly insurmountable barriers.

The independent school has a proven record of breaking down the barriers put up by troubled students, which ultimately leads to improved confidence and creative thinking.

The Eagle Rock School and Professional Development Center was created out of a desire by American Honda Motor Co. in 1989 to further its long-term commitment of contributing to society in an area unrelated to the company’s daily business.

Following thorough research, the company decided it would intervene in the lives of struggling young people by promoting community, integrity and citizenship.

The first group of students arrived in the fall of 1993 and the school celebrated its first graduates in 1995.

Eagle Rock school is a year-round, residential, full-scholarship school that enrolls up to 96 young people ages 15-17 from around the United States in an innovative, nationally recognized learning program.

In general, the students have not experienced success in traditional academic programs, with many not expected to graduate from high school before enrolling in Eagle Rock. But all of the students who enroll have expressed a passion about changing their lives, and nearly 80 percent of them receive a diploma from Eagle Rock, from another accredited high school, or a GED.

The methods that lead to this success with at-risk students can be observed through the on-site Professional Development Center.

Each year, the center hosts approximately 2,000 educators from around the world. They return to their home schools with new methods about re-engaging students in learning, keeping them in school, getting them to graduate, and helping them make a difference in the world.

Underwood was not afraid to get his hands dirty during the visit. In an art class,instead of molding minds, he mixed water and clay dust that would later be shaped into cups.

“The students really opened up to me,” Underwood said. “It was interesting to hear each student’s history and why they felt they couldn’t succeed at their local public high schools.”

Much of the classroom management is unique to Eagle Rock, and Underwood was completely focused while searching for opportunities he could initiate at Indian Lake. The workshop model learning method, used by many at Eagle Rock, caught his attention. It’s a relatively new teaching method, based on presenting ideas and creating open discussion and creative thinking.

“I like that most of the classroom discussion is student-led, and that it leads to a higher learning,” Underwood said.

The administrator discussing the method pointed to studies that show that the more teachers talk, the less a student learns. And the workshop model learning method is very much driven by student discussion.

Eagle Rock employs many innovative discipline methods that, in part, are designed to ensure that a student not only stays in school, but also stays in class.

One of those methods is restorative justice in which a student who causes harm to another individual is required to write a contract on how the damage will be rectified.

“This is a great way to hold students accountable for their actions,” said Underwood. “At Indian Lake this would be based on student interactions with each other as well as with their teachers.”

Following dinner on his last day, Underwood agreed to play the board game ‘Apples-to-Apples’ with other students and teachers. The camaraderie he built in three short days led to an evening of laughter and fun.

“I am so grateful to Honda for the opportunity to learn from the successful methods applied at Eagle Rock,” said Underwood. “I would like to extend the deepest gratitude to Honda and the Eagle Rock students and staff on behalf of the entire Indian Lake community.” ~~

Isaac was a troubled student. A private high school expelled him during his sophomore year. His parents home schooled him, but when he returned as a junior to a public school, trouble once again found him.

So with trouble swirling around him, Isaac was settling into a life of uncertainty and issues. While he wasn’t sure what his future held, he definitely knew he had no interest in attending Eagle Rock School, an alternative high school fully funded by American Honda located in the Colorado mountains.

“My parents found out about Eagle Rock, and I really didn’t want

to come even after getting accepted,” said Isaac.

Clearly a recipe for disaster was in the works. But at Eagle Rock, Isaac began to soar.

“. . . when I showed up and went on the wilderness trip for incoming students, I fell in love with this place,” said Isaac, who grew up on a ranch outside of a small California town. “The outdoors and camping is what gets me excited.”

Although Isaac rejected structure at his previous schools, he embraced outdoor activities. And the Eagle Rock School, secluded in the Colorado mountains, provides the structure he was missing while also fulfilling his aspiration for the open air.

The story gets better.

Although Isaac blends in among other students with difficult pasts – Eagle Rock purposefully takes on kids with a history of disciplinary issues – he excels when it comes to writing poetry or understanding the well-known works of William Shakespeare.

Head of School Robert Burkhardt acknowledged that Isaac is an exceptional student with a high level of intelligence. He displays an understanding of Shakespeare’s works similar to an upper level college student, Burkhardt said.

The school has helped Isaac recognize his level of intelligence, and even though he could become an English professor, he aims to be a wilderness instructor. It’s a direction fully supported by his parents and teachers at Eagle Rock.

“You never know where life will take you,” said Burkhardt. “I used to be a juggler for the circus and I believe each of my life experiences made me who I am today.”

Isaac’s favorite saying is the motto of Antioch College, his parents’ alma mater – “Be ashamed to die unless you have won some victory for humanity.”

Isaac is now on the path to create a positive impact on humanity, no matter where his journey takes him.

It all Starts with a Little Sweat

Located a mile and a half above sea level, the air at Eagle Rock School is fresh. But it is limited in one thing we all love, and need – oxygen. The low air pressure at high altitudes reduces the amount of that necessary element within each breath.

At Eagle Rock, diminished oxygen is no excuse to abstain from physical activity.

All students are required to exercise every morning. One of the most intimidating challenges to a new student – the 2.3-mile roundtrip run to the front gate.

And, unlike Ohio, Colorado has real mountains.

The students gather around 6:50 a.m. as a staff member takes roll call. They start their trek 10 minutes later in the brisk mountain air.

“I have to take it easy since we just returned from a long break,” said Jonathon, a veteran student.

The students cross the finish line noticeably winded. Wide awake and with warm muscles, they head to the food hall. Each meal is high in nutrition. Even though the food hall is open late, cravings for soda and sugary foods go left unfilled at Eagle Rock. That said, there are plenty of snacks in the form of fresh fruit and whole grain cereals.

Daily exercise and nutritious meals may not be a habit at home, but students find they miss both during breaks.

“The food is great,” said Vidal, a two-year veteran at Eagle Rock. “I’ve learned to eat better at home and have lost 50 pounds since I started school here.”

Now that the body is fed, the mind is ready to consume the material presented in Eagle Rock’s interactive class setting.