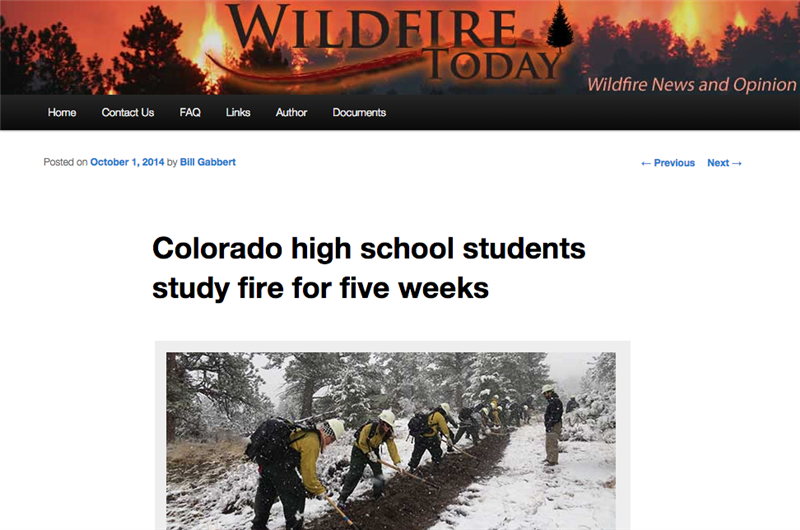 From the National Park Service:

Sayings like these are more than just words in the world of firefighting: “Punctuality shows respect,” “Train like you fight,” “Crew cohesion is important.” They are life lessons that students from an alternative residential high school in Estes Park, Colorado, learned during a five-week class on wildland fire.

An existing relationship between the school, the park and hotshot crew sparked the idea for the “Fire!” program. An Eagle Rock student has been a member of the Alpine Hotshots for the past four fire seasons. In May 2011, Rafael Mcleod graduated before joining the team. Vidal Carrillo became a hotshot in 2012 and continues to work on the crew while also pursuing his undergraduate degree at Colorado State University.

This enthusiasm is part of what ignited the “Fire!” program. Ben Baldwin, ecologist at the learning center, and Paul Cerda, Alpine Hotshot superintendent, discussed opportunities with Eagle Rock School when they came up with the idea for the pilot program. “After Vidal and Rafael’s success as members of the hotshot crew, we knew several kids were interested in wildland fire,” Cerda said. “Ben and I decided we needed to build on that, partly as an opportunity for diversity recruiting.”

Baldwin approached Eagle Rock School with the idea to develop the pilot course for citizen fire science, similar to other citizen science programs offered through the learning center. While the initial idea was to put the students through a 40-hour basic wildland fire course in order to certify them as wildland firefighters, Cerda and Baldwin quickly realized lectures were not going to be the best learning environment for these students.

This year, learning center staff member Holly Nickel used her expertise in education and curriculum development to refine and develop materials for this course. “Four of the key principles in fire — safety, physical training, fire ecology, and fire suppression — were the goals of the new fire curriculum,” Nickel said.