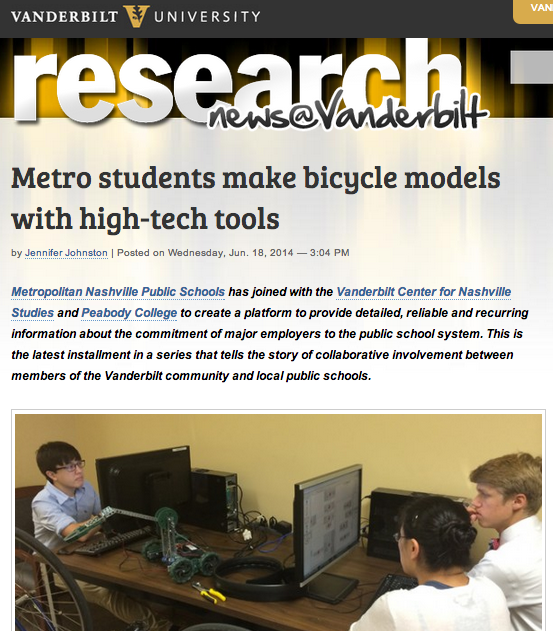 Metropolitan Nashville Public Schools has joined with the Vanderbilt Center for Nashville Studies and Peabody College to create a platform to provide detailed, reliable and recurring information about the commitment of major employers to the public school system. This is the latest installment in a series that tells the story of collaborative involvement between members of the Vanderbilt community and local public schools.

The internship project, now in its second year, is facilitated by Brandon Knight and his brother, Justin. Program coordinators for separate projects at Vanderbilt’s Institute for Software Integrated Systems (ISIS), the siblings created a bike shop while growing up in Hartford, Connecticut. They quickly realized tools created at Vanderbilt could be used to excite teen-agers about computer modelling concepts.

Before joining the ISIS team, Brandon Knight taught science at Eagle Rock School and Professional Development Center in Estes Park, Colorado, and worked for a nonprofit on drop-out prevention. He brought that passion for education to his current job at Vanderbilt.

Under Brandon’s guidance, the interns are working in teams using modeling tools to develop new concepts, much like the engineers who developed the new suite of software as part of a large-scale effort to democratize the vehicle design process and significantly cut design time. The software, which ISIS created for the Defense Advanced Research Project Agency, is open source, meaning it is available for free.

The software tools were developed as part of the Automated Vehicle Make (AVM) project in an ambitious effort to totally revamp the way the Department of Defense supplies vehicles to the nation’s troops. Sandeep Neema and Ted Bapty, senior research scientists at ISIS, are principal investigators. Both are also research associate professors of electrical engineering and computer science at Vanderbilt.

AVM has an educational component that includes anundergraduate design competition, during which student participants from Vanderbilt worked in a School of Engineering lab with Tom Withrow, assistant professor of the practice of mechanical engineering. Withrow provided input for the start of the summer high school program as well.

The 13 interns hail from Hume-Fogg, Martin Luther King and Stratford high schools in Nashville. The part-time internships are unpaid this summer, but Knight said he hopes to seek possible funding sources.

The ultimate goal of the internship, now in its second year, is to encourage a growing pool of high-tech talent in Nashville that would ultimately attract industry to the area and plant the seeds for young entrepreneurs interested in start-ups.

“We need to re-capture the imagination of the best high school students early on with the excitement and beauty of engineering design,” said ISIS Director Janos Sztipanovits, E. Bronson Ingram Professor of Engineering. ”What could be a better way for this than turning them into makers, challenging them with creating new things and empowering them with engineering tools that help them to freely innovate?”

Founded in 1998 with just 10 researchers, ISIS now has a cadre of more than 180 faculty, staff, students and interns involved in more than 60 active projects. ISIS is a key national player in an effort to design the software-integrated systems that have become an integral part of human lives today – in consumer appliances, vehicles, planes, hospitals, schools, design shops, factories, space systems and energy.

Contact Brandon Knight at bknight@isis.vanderbilt.edu for more information about the internship program, including details about a planned presentation of the interns’ projects on Aug. 1.