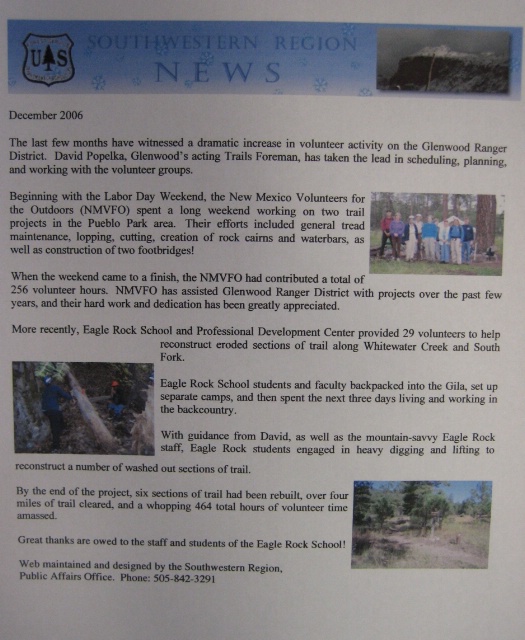 The last few months have witnessed a dramatic increase in volunteer activity on the Glenwood Ranger District. David Popelka, Glenwood_s acting Trails Foreman, has taken the lead in scheduling, planning, and working with the volunteer groups.

Beginning with the Labor Day Weekend, the New Mexico Volunteers for the Outdoors (NMVFO) spent a long weekend working on two trail projects in the Pueblo Park area. Their efforts included general tread maintenance, lopping, cutting, creation of rock cairns and waterbars, as well as construction of two footbridges!

When the weekend came to a finish, the NMVFO had contributed a total of 256 volunteer hours. NMVFO has assisted Glenwood Ranger District with projects over the past few years, and their hard work and dedication has been greatly appreciated.

Eagle Rock School students and faculty backpacked into the Gila, set up separate camps, and then spent the next three days living and working in the backcountry.

With guidance from David, as well as the mountain-savvy Eagle Rock staff, Eagle Rock students engaged in heavy digging and lifting to reconstruct a number of washed out sections of trail.

By the end of the project, six sections of trail had been rebuilt, over four miles of trail cleared, and a whopping 464 total hours of volunteer time amassed.

Great thanks are owed to the staff and students of the Eagle Rock School!

Web maintained and designed by the Southwestern Region,