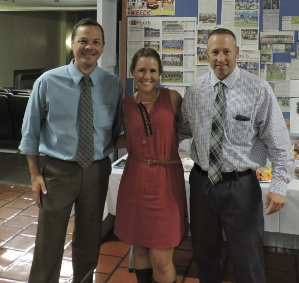 The film, titled “Most Likely To Succeed,” takes a hard look at the American education system and its ups and downs. The film was brought to the attention of Harrison County school officials by Anastacia Galloway. Galloway, a Weirton native, now works for the Eagle Rock School and Professional Development Center in Colorado. She first saw the film in Albuquerque and thought that the message the film provided would find a ready audience in the Ohio Valley.

“I saw it as my life from growing up around here,”said Galloway. “I think it really spoke to the parents around here.”

The film explores the concept that the American education system is woefully out of date for students in the modern world, and as a result students are being left unprepared for a future in a working environment. The narration points out that the last significant update to the education system was nearly 100 years ago, near the rise of the Industrial Revolution. The system of school being broken into different periods and subjects just isn’t relevant to modern students.

The movie takes a look at a school that is trying a different take on education, High Tech High in California. High Tech High is unusual in that it doesn’t have school periods; students just kind of flow from classroom to classroom throughout the day. Students there engage in “project based learning.” In PBL, students don’t study rigorously for a test; rather, they engage in long projects, such as a play or building a display, to prove that they have mastered the concept their instructors have been trying to impart to them over the semester, which are then displayed to the public. The theory behind this is that students will work that much harder to present a project that they are proud of than on a test they have no personal investment in. Instruction is also a bit different; teachers sign on for one year at a time and have complete freedom in what they teach, from the subject matter to how much they teach. The film stresses that while not everyone learns in the same way, many students respond better to hands-on experiences than constant memorization for standard tests.

When Galloway first saw the film, she was already speaking to Harrison School Principals Brent Ripley and Ken Parker, and told the two about the film and the message it sent. The two agreed that it was one that area students and parents would benefit from hearing, and arranged to have a screening of the movie in Cadiz.

“Its another tool to help increase activity and engagement,” said Ripley.

Ripley spoke about the new levy recently passed by the school district to build a new school building for the Harrison Hills Schools in the next few years. He said that the new facility will incorporate more project based learning, which is already starting to be integrated into the current curriculum.

This new way of learning is not without its own challenges or opposition. Many question how students will be able to get into a good college without being taught how to pass the ACT or SAT tests, while others or just concerned that students are breaking away from a tried — if flawed — system that has been in place for almost a century. Ripley acknowledges his concerns, adding that he was questioned by school officials about such matters himself, but he sees the potential of PBL as worth the risks.

“I was asked why a group of students was outside with their teacher. I told him, ‘They’re learning.’ And that’s what really matters,” Ripley said.