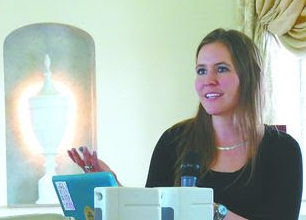 WEIRTON – Sometimes traveling to a faraway place is just another way of coming home.

Lately, Anastacia Galloway’s travels have been bringing her much closer to home-partly to be with her father, Weirton attorney William Galloway, and partly to train area educators in new ways of thinking about education.

Galloway, who goes by Staci, grew up in Weirton and attended Brooke County Schools. When she graduated in 2003, she did what a lot of West Virginia high school graduates do-she attended West Virginia University.

She took a double major-Spanish and business-traveled to Chile and became fluent in Spanish. She worked in West Virginia, Mexico and Nashville before settling into her current job as professional development associate with Eagle Rock School in Estes Park, Colo.

Now that she calls the Rocky Mountains home, Galloway is glad that her job is bringing her back to the Ohio River valley.

“I’m really excited about my local projects,” she said.

Eagle Rock is a nontraditional high school for students who have struggled in traditional high schools. “I think the wheels start coming off for a lot of kids at age 16 or 17. That’s when they really start noticing, ‘I’m not going to graduate,’ ” she recently told the Weirton Rotary Club.

Eagle Rock gives full scholarships to students from age 15 and requires a two-year commitment in order for them to graduate with a high school diploma. An initiative of the American Honda Education Corp., the school opened in 1993 and currently has an enrollment of 74 students.

“There’s a lot of students out there who just need a different setting. We don’t all learn the same way,” she said.

Galloway, whose son, Luca, is about to turn 3, is a house parent to 11 Eagle Rock students, which she likens to “having a really big family.” Among the classes she’s taught is River Watch, which requires students to go fly fishing in nearby Rocky Mountain National Park. But she spends most of her time traveling the country and imparting Eagle Rock’s vision for secondary education to public schools.

The professional development work is done pro bono-paid for by Honda-and through repeat visits, workshops, in-service training and coaching. Galloway’s main job is to listen and to facilitate, as teachers, principals and superintendents look for ways to better engage their students.

“Instead of coming in and saying, ‘Here’s the best thing to do in your school: Now go,’ I come in and say, ‘What do you want to do? What’s working well?’ ” she said.

Although she has worked with schools from the Bronx, N.Y., to Albuquerque, N.M., she’s been spending more time in Jefferson and Harrison counties because of her father’s connections. A defense attorney in Weirton, William Galloway also teaches courses on the Bill of Rights in West Virginia and Ohio.

In Toronto, Staci Galloway is working with primary and secondary educators to reduce the incidence of discipline problems and failures. At Harrison Central Junior/Senior High School, she is training educators on how to implement project-based learning.

“They are moving toward project-based learning in Harrison because they think it’s going to improve the engagement of their students and increase their test scores,” she said. “If (students are) more engaged in their education, they’re going to learn more and their test scores will improve.”

Galloway said her work-and the work of the Eagle Rock Professional Development Center-is about “fixing” education in the United States one school at a time.

“There’s a big crisis in secondary education-a student drops out of high school every 12 seconds in the United States,” she said. “We need to start somewhere. I believe it shouldn’t be some legislator with no background in education. I think it’s naive to think that one size fits all.”