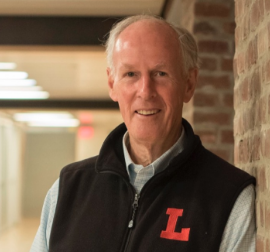 Each year, a list of 15–20 nominations is compiled, and a sub-committee of the Alumni Association Executive Committee chooses one person they think best embodies the ideals of the award. The award was first given in 1991 to a Pulitzer Prize-winning poet, and since then it has been given to scientists, journalists, entrepreneurs, and nobel laureates.The Aldo Leopold Award is given annually to a Lawrenceville alumnus who, according to the Lawrenceville website, has exhibited “brilliant, life-long work in a significant field of endeavor.” One of the highest honors that the School can grant, it is named and dedicated in the memory of renowned environmentalist and author Aldo Leopold, class of 1905.

This year’s recipient, Robert James Burkhardt, Jr. ’58 P’07’09, is another addition to the exceptional, elite group of Leopold Award winners. A leader in the field of education, Burkhardt graduated Lawrenceville in 1958. During his time at the School, he was a member of the swim team, Glee Club, and “The Lit.” He went on to attend Princeton University, where he received his B.A. in English. He furthered his studies by not only earning a Master’s degree in education from Columbia in 1969, but also a Ph.D in the field from Union Graduate School in 1971.

While in school, Burkhardt worked for the Peace Corps as an English teacher in Iran before coming back to the School in 1965 to serve as an English Master and admission officer. Following his departure, in 1976 Burkhardt went to the California Conservation Corps, an agency helping young people connect with the environment, becoming the Chief Deputy Director after eight years of service. He left the Corps in 1984 to start his own conservation program, the San Francisco Conservation Corps, and acted as Executive Director.

All of his accomplishments resulted in his teaching at the newly opened Eagle Rock School, where he was selected as the Head after a nationwide search. The school was founded by the American Honda Motor Company in 1991 with the premise of using unconventional teaching methods, such as the absence of grades, to educate underprivileged children between the ages of 15 and 17. The student body is made up of “gang members, drug abusers, dealers, unwed parents, the chronically dysfunctional, and the generally disaffected,” but after a few weeks under the guidance of Burkhardt, they are “practically unrecognizable,” according to the Eagle Rock School.

“The Eagle Rock School, which he founded, was a school designed for kids heading nowhere basically,” said John E. Gore, Jr. H’64, Director of Alumni Relations and The Lawrenceville Fund, after being asked why Burkhardt was chosen this year. “They wind up going to the Eagle Rock School and they have been able to do some remarkable things for those kids and kind of give them a sense of how to get ahead and they’ve been doing very well.”

Burkhardt has since won many other awards, including the Class of 1962 Service Award at Princeton and the Sargent Shriver Award for Distinguished Humanitarian Service. He retired in 2012 and is currently a writer for Estes Park News, a trumpet player, and teaches Tai Chi at the EP Senior Center. He is also on the Board of Directors for Conservation Legacy.

Burkhardt will first attend a dinner before receiving the award this Friday at school meeting and address the entire student and faculty body.