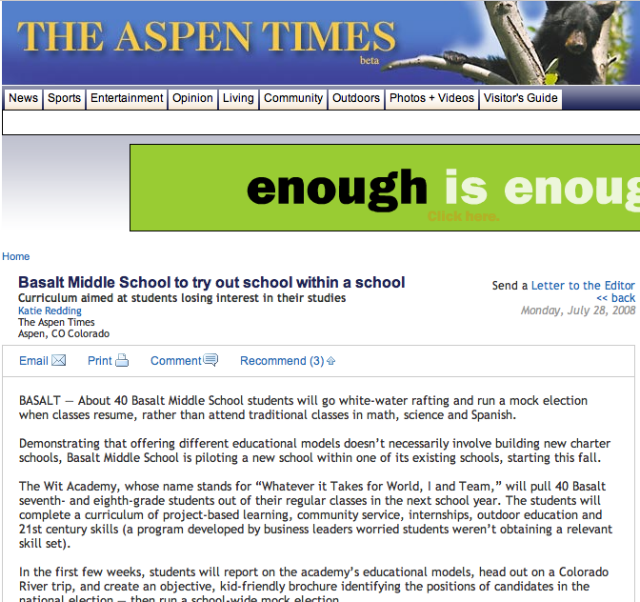 BASALT — About 40 Basalt Middle School students will go white-water rafting and run a mock election when classes resume, rather than attend traditional classes in math, science and Spanish.

The Wit Academy, whose name stands for “Whatever it Takes for World, I and Team,” will pull 40 Basalt seventh- and eighth-grade students out of their regular classes in the next school year. The students will complete a curriculum of project-based learning, community service, internships, outdoor education and 21st century skills (a program developed by business leaders worried students weren’t obtaining a relevant skill set).

In the first few weeks, students will report on the academy’s educational models, head out on a Colorado River trip, and create an objective, kid-friendly brochure identifying the positions of candidates in the national election — then run a school-wide mock election.

Carruth and Douglass have created the curriculum themselves, using some of the best practices from other school models, they say. They recently visited Skyland Community High School in Denver, which focuses on learning with real-world applications, and the Eagle Rock School in Estes Park, which graduates students based on demonstrated competency rather than “seat time.”

Though not yet widespread, the concept of schools within schools has become increasingly popular for school districts looking to shrink school size without actually building new structures. Smaller learning environments positively affect grades, test scores, attendance and graduation rates, drug and alcohol use, and school safety, according to the National Conference of State Legislatures, a bipartisan research foundation.

In this case, Basalt Middle School was looking for a way to reach “learners who have become, or are starting to become, disengaged in school and learning,” according to Carruth. Even though students typically don’t drop out of school until later on, middle school is when some students first begin to lose interest, she explained.

For many years, Douglass explained, their leadership-building team had discussed how to reach less-involved kids. So when she and Carruth came up with the Wit Academy idea, Basalt Middle administrators were receptive.

“Our school is really lucky to have an administration and staff who are open to change and innovative ideas,” Carruth said.

When they introduced the program to rising seventh- and eighth-graders, the teachers found interest not only among less-engaged students but also students who truly enjoy project-based learning or community service.

Students were selected for the program based on an application that both students and parents completed. Douglass and Carruth looked both for students who would reap the greatest rewards from the academy, as well as for those who clearly were losing interest in a traditional classroom model. They’ve ended up with a classroom make-up that generally mimics Basalt Middle School in terms of race and gender, they said, though they have a few more boys and Caucasian students.

As for cost, the fact that the program uses existing teachers and facilities means it has not technically created an additional expense for the school. However, the two teachers said they have to do plenty of fundraising and grant writing to bring in additional money for some of their projects.

“It may take a lot of work, though,” Carruth pointed out, smiling wryly about the task in front of them.