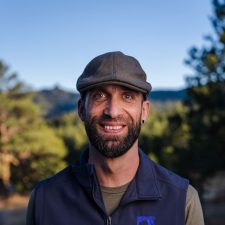 Josán Perales is responsible for the World Language curriculum at Eagle Rock. Integrating his passions for social and environmental justice, into meaningful contexts and valuable projects that engage students to explore the world and their own identity and place in the world. Josán was born in Zaragoza, Spain to a Spanish mother and Puerto Rican father, and quickly began traveling some parts of the world throughout his youth. He hails from New Mexico, where he graduated High School and began his teaching career after receiving his BA in Spanish from Willamette University in Salem, OR. In his seven years cultivating an Expeditionary Learning school in Taos, NM, he co-founded Taos Youth Travel Club and co-led a trip to Costa Rica with students and family members. In addition to teaching Spanish, Josán was an instructional coach and curriculum-guide, taught Multicultural Leadership, Art & Media Leadership, and the job-shadow/Mentorship program at his previous school. He and his partner, Shawna, and son, Oliver, are entering their second year of House Parenting Ponderosa house.

Students inspire me when they surmount both physical and mental challenges and reach beyond their own expectations.