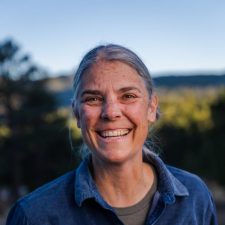 Janet Johnson is Eagle Rock’s Director of Curriculum. Janet is responsible for all things related to the academic program, instruction, and curriculum at Eagle Rock. For the last four years, Janet has been the Director of Competency-Based Learning at RiseUp Community School in Denver, CO, where she facilitated the development and implementation of RiseUp’s learning competencies. She also held the position of Director of Curriculum at RiseUp. In addition, Janet served as Eagle Rock’s science instructor from 2001 – 2016, as well as a House Parent in Aspen House for 11 of those years. Janet earned her M.A. in Curriculum and Instruction from the University of Colorado, Boulder, and her B.A. in Biology from Northwestern University in Evanston, IL. Janet lives on campus with her partner, Beth, and their dog, Lucy.

Students inspire me when they take charge of their learning and growth.