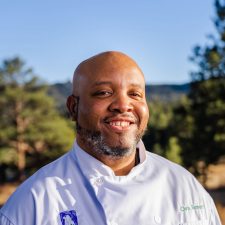 Chris Bennett is a Colorado native and culinary veteran with 20+ years of experience in the industry. At 18, Chris attended New England Culinary Institute in Montpelier, Vermont, where he earned his AOS degree in Culinary Arts. For most of his early career, Chris specialized in upscale French cuisine,  Mediterranean, and “New Style American Cuisine”, honing his skills and building his repertoire in some of the best restaurants in Las Vegas, as well as Denver. From Joachim Splichal’s Pinot Brasserie in the Venetian, and Daniel Boulud’s DB Brasserie in the Wynn, to Denver’s Rioja, Bistro Vendome, and Elway’s to name a few, Chris gained a solid foundation. In 2014, Chris became the only chef to be selected for Sister Cities International’s international Chef exchange program which took him to Brest, Bretagne France to stage within a couple restaurants/resorts as well as shadow instructors and present to Students at the Fenelon School of Culinary Arts. Upon his return, Chris set his sights on learning Asian cuisines and earned his way from part time line cook to Executive chef of Uncle Joe’s Hong Kong Bistro within a year. Not only earning new skills but also earning the restaurant a feature on the Travel Channel’s hit show “Food Paradise”. After 3 years as Executive chef there, he expanded to Japanese, becoming executive Sous chef at Ototo Den (of the Sushi Den family of restaurants) training in the intricacies of Japanese cuisine before turning his sights on global street food, helping open Street Feud in 2019. In 2021, Chris saw an opportunity arise to join the kitchen team at Eagle Rock, and made it his mission to become part of the team, where he has been able to use his years of experience in multiple cuisines to help not only provide ERS students and staff with balanced meals but also give expose them to flavors and cuisines they may not have tried before.