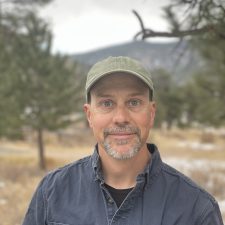 Brad is part of our Operations or “Rockin Ops” Team. He has a degree in Interpersonal and Organizational Communication from the University of Cincinnati. Brad moved out west after college and began his first career as a corporate trainer and software tester.

After meeting the love of his life, he left the Front Range of Colorado to support his wife’s career as an ecologist in places like Silverton Colorado, Stanley Idaho, and Sequoia National Park. During this time he started a software training company and worked as a large format printer reproducing artwork.

When he and his wife welcomed their second child, Brad left the computer world to become a stay-at-home parent. Five years later, when his kids started school, he became a tour guide in Sequoia National Park. This led him to the realization that he preferred a career that involved more human interaction, so when he moved back to Colorado he became a substitute teacher, which eventually led him to Eagle Rock. Now he spends his days supporting the staff and students on campus and absorbing their positive energy.

When he’s not at work, you’re likely to find him in the mountains, enjoying a bike ride or rock climbing with his family.

My favorite thing about Eagle Rock is the supportive and friendly mindset of the staff and students.