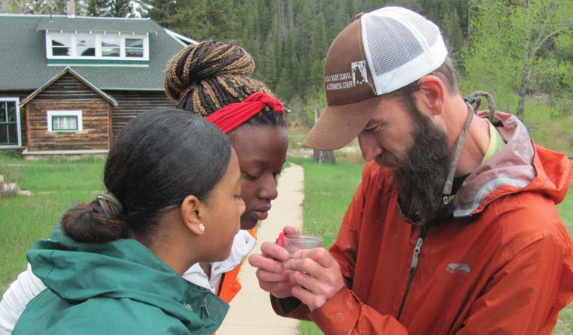 These questions were just a few of many that a group of Maine scientists and educators examined. The project began as part of Acadia Learning, a collaboration with the Schoodic Institute at Acadia National Park, the University of Maine and Maine Sea Grant.

Mercury is a toxic pollutant detrimental to the health of both wildlife and humans alike. Furthermore, it threatens the natural resources that the National Park Service (NPS) serves to protect. The main source of human-caused mercury in remote national park environments is atmospheric deposition from coal-burning power plants. Because mercury levels across the United States remain largely unknown with much data still needed to be collected, it was hypothesized that engaging park units through citizen science would prove beneficial in finding more answers in a shorter time frame. But how best could citizen scientists answer these questions?

As it turned out, dragonflies were the answer. Dragonflies spend most of their life (up to five years!) in the larval stage before morphing into their fast-flying, aerial predator adult selves. During the larval stage, dragonflies dwell in water and play an integral role in the aquatic ecosystem. Smaller insects (which may have ingested mercury) are oft?en consumed by dragon- fly larvae during this stage, a process called bioaccumulation.

The larvae accumulate mercury as they develop and grow, with concentrations increasing as mercury passes up the food chain. Ultimately, larger fish consume some of the larvae, creating an avenue by which mercury can be passed on to larger animals, including humans. Dragonfly larvae are relatively small, making them easy to amass and transport to the U.S. Geological Survey (U.S.G.S.) laboratory for analysis. For these reasons, the collection of dragonfly larvae seemed a choice option.

The study started in a handful of parks in 2010-2011, including Rocky Mountain National Park (RMNP). Now in its fifth year, the 2015 sampling season included more than 40 park sites and other open space areas.

The Dragonfly Mercury Project, as it is known today, is designed to engage citizen scientists in hands-on specimen collection and research. Since 2013, RMNP has conducted this project through a partnership with Eagle Rock School and Professional Development Center (ERS) and the Continental Divide Research Learning Center (CDRLC).

Over the past three years, the project has evolved into a five-week, spring semester course offered at ERS. Students spend four days out of each week dedicated to the project both in the classroom and out in the field. This teacher adoption model gave Jon Anderson, a 12-year veteran educator at ERS, freedom to develop relevant curricula on topics such as bioaccumulation in food webs, the transportation and deposition of mercury, riparian zone ecology, and dragonfly life cycles and their habitats.

The course incorporates a variety of learning styles with plenty of hands-on activities that are meaningful and structured in such a way to promote understanding, connections and background for the student citizen scientists. Former CDRLC Learning Specialist Ben Baldwin has seen this program come a long way:

“This is a great project that shows the potential of citizen science projects and the benefits from them. The dragonfly project enhances a classroom experience by using the park as a lab and field experience and provides the park with much-needed information. It highlights the nexus of public involvement in parks, science literacy and youth engagement. All of these result in youth having stronger connections to parks and stewardship.” — Ben Baldwin 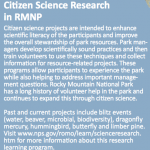 In 2015, the student citizen scientists collected samples from four bodies of water in RMNP, along with the help of park staff from the CDRLC. Prior to each collection, a scouting day occurred in which students made observations about the location, practiced sampling protocols and identified locations where dragonfly larvae could be found. During the second visit, a total of 20 dragonfly larvae (identified to the family level) were measured, bagged and prepared for analysis at the USGS laboratory. Along with the larvae samples, information and data gathered about each site (such as size, location and vegetation cover) were compiled and included. The students worked side by side with NPS staff members and their instructor to complete all of these steps – a real team effort!

Additionally, Eagle Rock students had unique opportunities to network with park visitors while out in the field. These interactions led to special public outreach connections that enhanced the students’ park experience and that of the visitors as well. Working alongside NPS staff allowed the class to come to life with authenticity and professionalism. Jon Anderson appreciated the opportunity for his students to get out of the class- room:

“As a teacher I like to provide real-world opportunities for students to learn about
both science and about the wild places and the animals that live in them. Getting to work and partner with the CDRLC and RMNP give us these experiences. Students aren’t just sitting in
class reading about mercury and dragonflies; they are out in the field experiencing first-hand what it means to do place based collaborative research. Students get to become the experts! Seeing students interact with the park staff, volunteers and the public while we have been out sampling has been a highlight. Students develop meaningful relationships with park employees and turn into educators themselves as they explain the project and share their knowledge of dragonflies with those they encounter.” — Jon Anderson 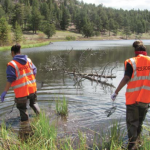 The baseline data collected thus far is being used to answer myriad questions regarding mercury in our national parks. Further expansion of the project and collection of additional data over time will help scientists bett?er understand the implications of their results.

This project serves as a successful model of how to use student citizen scientists to collect meaningful data that can influence park management. Stay connected with this project and others happening through the CDRLC via their website www.nps.gov/CDRLC.

Holly Nickel is an Education Technician for the Continental Divide Research Learning Center in Rocky. Jon Anderson is the Human Performance and Outdoor Education Instructor for Eagle Rock School and Professional Development Center.