Once labeled a “youth-at-risk,” 30-year old Eagle Rock School graduate, Matt Rutherford risked it all in an attempt to become the first person to sail alone, nonstop around North and South America. Red Dot on the Ocean is the story of Matt’s death-defying voyage and the childhood odyssey that shaped him. 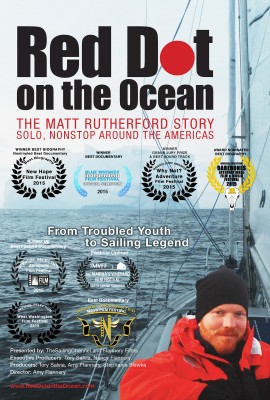 Matt Rutherford became a sailing legend when, at 30 years of age, he departed from Annapolis, MD in a scrappy old 27-foot fiberglass sloop without fanfare. Rutherford braved the icebergs of the artic and mountainous waves of Cape Horn to become the only person to ever sail single-handed, non-stop around the Americas; a 27,000 mile journey many professional sailors declared “a suicide mission.” Matt’s story is told through his own words and interviews with his family, sailing experts, and others. Through family photos, childhood videos, footage of his early sailing days and video, audio logs and stills from his historic around the Americas voyage, we experience Matt’s journey and his trials and tribulations.

How does a trouble youth become a sailing legend? Ask Matt Rutherford. His story is full of surprises and makes us all feel we can do more than we ever imagined.

Red Dot on the Ocean: The Matt Rutherford Story is a film by Amy Flannery, Tory Salvia, and Stephanie Slewka, which has been awarded various accolades by several national and international film festivals and has received stellar reviews by the New York Times, The Hollywood Reporter and the Film Journal International, among others.

Major funding for this program was made possible in part by American Honda Motor Co. Inc.

Eagle Rock, a nonprofit Corporate Social Responsibility initiative of the American Honda Motor Company, is both a school for high school age students and a professional development center for educators. The school is a year-round, residential, and full-scholarship school that enrolls young people ages 15-17 from around the United States in an innovative learning program with national recognition.

We envision this country’s high schools as high functioning centers of engagement and learning. We accelerate school improvement and support implementation of engaging practices that foster each students’ unique potential and help young people use their minds well.

For more information please visit www.eaglerockschool.org and check us out on Twitter @eaglerockschool and on Facebook at facebook.com/EagleRockSchool.