So much so that the 36-year-old married Prescott College graduate three years ago invested her grandmother’s inheritance — $14,000 — into launching a local teen center she named the Launch Pad.

The gesture was not solely a philanthropic endeavor but a personal form of redemption.

The one-time middle school Student Council president and high school athlete from a good family in Fort Collins, Colorado, said her teen years were a private horror show. Bullied and battered, Osterfelt admits she hid her invisible despair and scars with bad choices and bad influences. 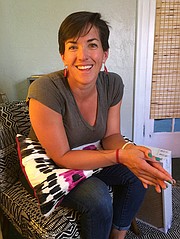 Courtney Osterfelt is executive director of The Launch Pad.

At that school, Osterfelt was able to see herself as a smart, capable young woman who could rise above any obstacle. The seeds of her future were planted. She was propelled to pursue education and opportunities that would enable her to be a force for good.

The Prescott College graduate — she earned her bachelor’s in education and earned a master’s degree in social change and community development — determined to build a career that would “pay it forward.”

“Every kid needs someone to light a fire and let them know that they can change the world if they want to,” Osterfelt said.

Her first foray into empowering teenagers was a college project: she organized a health education retreat for high school-aged girls intended to help thwart the rising rate of teenage pregnancy.

“I thought I would do it just one time,” Osterfelt said.

Instead, the 37 retreat attenders begged her to do it again. It was the birth of a 13-year, all-volunteer run conference called the Women’s Empowerment Breakthrough (WEB). It is now part of the annual Launch Pad programs in April 57 girls between the ages of 12 and 18 attended. The center raised $5,000 to cover the costs of the retreat held at a conference center on Mingus Mountain.

Never one to stay idle, Osterfelt started building a career that included working as a health educator at the county juvenile detention center; working at Prescott College organizing student activities and events where she, too, taught gender studies for five years.

Yet, ideas kept percolating in her mind on how to create a lasting outreach to teens.

The unexpected generosity of her grandmother, Helen “Tutu” Street in Denver, Colorado, enabled her to birth the Launch Pad in a small room of the Granite Peak Unitarian Universalist Congregation in downtown Prescott. Osterfelt committed to lead the venture with no salary for a year; she worked part-time as a waitress to pay her bills.

The center started out in a small pace at the Granite Peak church before they then moved into larger space at the Boys & Girls Club. A year ago, the center reopened in still larger quarters on the on the grounds of Prescott College, 302 Grove Ave.

And the center continues to seek ways to expand. Nothing is ever deemed impossible, Osterfelt said.

With an annual budget of $80,000, all now from private donations and fund-raising activities, Osterfelt was able to add two staff members and has numerous volunteers. The center serves some 100 teens each week; four camps this summer served another 100 teens.

In the coming year, Osterfelt hopes to expand again to offer after-school tutors. She even has plans for a blacksmithing class.

Osterfelt’s goal is always a safe haven for all teens, whether they are the most popular students or the wallflowers. She believes in nurturing the unique talents of every teen so they gain the confidence to become tomorrow’s leaders.

Osterfelt does not tolerate teens dismissing their worth. She lets them know obstacles “are not an excuse to quit.”

Even if she must reprimand someone, Osterfelt said she tells them they are “amazing” and she will “love them through” whatever is their storm.

“She’s just like ‘Wonder Woman.’ She’s a super hero,” said Cayden Himes, 19, a teen center member and musical event planner who is now on the center Board of Directors.

“She just has one of those hearts … she’s a server. She serves other people because that’s what does it for her,” said Cody Anne Yarnes, a real estate agency owner who annually donates about $10,000 to the center. Yarnes’ husband, Michael, was tapped as the first board president.