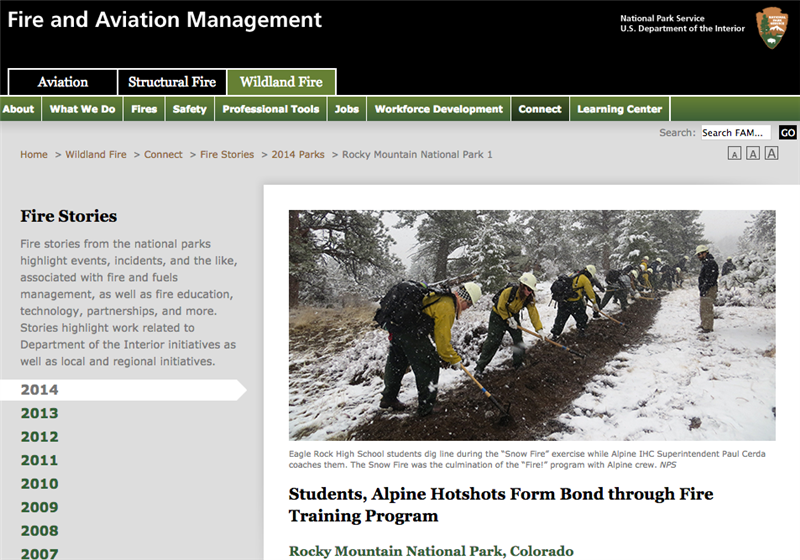 Sayings like these are more than just words in the world of firefighting: “Punctuality shows respect,” “Train like you fight,” “Crew cohesion is important.” They are life lessons that students from an alternative residential high school in Estes Park, Colorado, learned during a five-week class on wildland fire.

An existing relationship between the school, the park and hotshot crew sparked the idea for the “Fire!” program. An Eagle Rock student has been a member of the Alpine Hotshots for the past four fire seasons. In May 2011, Rafael Mcleod graduated before joining the team. Vidal Carrillo became a hotshot in 2012 and continues to work on the crew while also pursuing his undergraduate degree at Colorado State University.

This enthusiasm is part of what ignited the “Fire!” program. Ben Baldwin, ecologist at the learning center, and Paul Cerda, Alpine Hotshot superintendent, discussed opportunities with Eagle Rock School when they came up with the idea for the pilot program. “After Vidal and Rafael’s success as members of the hotshot crew, we knew several kids were interested in wildland fire,” Cerda said. “Ben and I decided we needed to build on that, partly as an opportunity for diversity recruiting.”

Baldwin approached Eagle Rock School with the idea to develop the pilot course for citizen fire science, similar to other citizen science programs offered through the learning center. While the initial idea was to put the students through a 40-hour basic wildland fire course in order to certify them as wildland firefighters, Cerda and Baldwin quickly realized lectures were not going to be the best learning environment for these students.

This year, learning center staff member Holly Nickel used her expertise in education and curriculum development to refine and develop materials for this course. “Four of the key principles in fire — safety, physical training, fire ecology, and fire suppression — were the goals of the new fire curriculum,” Nickel said.

Instructors challenged students to memorize and tie in the standard firefighting orders, “the 10’s” and watchout situations, “the 18’s” that incorporate safety into each daily lesson. Students also tested in the fire fit challenge, which includes running a mile and a half, and maximizing the number of pushups, sit-ups and pull-ups they can do in three minutes during their first week of class. They were tested again on the last day for the physical training aspect of the class.

Students spent time in the field with park forester Brain Verhulst to learn about tree health and park ecologist Scott Esser to learn about succession and fire’s effect on ecosystems. Instructors and students spent many hours at the sand table, a large sandbox with props, working out scenarios and applying what they learned about fire suppression. Students also spent a day acting out a fire field scenario with Cerda and Alpine Hotshot Captain Mark Mendonca.

Dressed in full personal protective equipment, the students gathered tools and hiked into a simulated “fire” area, received a briefing and dug fire lines. They followed a designated escape route to a deployment zone, where each student deployed a practice fire shelter. A debriefing back at the school assessed what they learned.

The inaugural class of students (yellow shirts) from Eagle Rock High School who participated in “Fire!” with the Alpine Interagency Hotshot Crew, after completing their work on the Snow fire exercise. NPS

“The students learned more in this course than just the science of wildland firefighting,” Baldwin said. “They learned about the hotshot’s core values of safety, duty, respect and integrity. They learned about hard work, team work and personal development. And they learned the importance of physical fitness.”

Seventeen-year-old Franco Casas of Los Angeles said he was inspired to take the class by Carrillo’s experience with the Alpine Hotshots. “(The) class gave me a different perspective. I thought all fires were bad, and you just put them out. But then we learned about fire in the ecosystem,” he said. Casas, who said opportunities are rare back in his L.A. home neighborhood, wants to pursue becoming a hotshot. “It’s a dangerous job, but it’s challenging,” he said. “They train like they fight, and it’s always safety first.”

For 19-year-old Jeremy Coles, the course taught him a lot about what it means to be a leader. “Working with the Alpine Hotshots encouraged me to be more on top of my game with life skills and working as a team, being a leader to make class smooth,” said Coles. “Meeting people from RMNP opened up doors for my future.”

The mixture of classroom teaching, field exercises and hands-on science kept the students engaged. Student Valentina Ramirez, who is from the same East L.A. neighborhood as Cerda, said the class went well beyond her expectations. “I just thought we’d hear from (hotshots) about their experience,” she said. “I didn’t know we’d get to use their tools, and even the fire shelter. I didn’t know how dangerous firefighting was. I definitely have a greater appreciation for what firefighters do.”

For Eagle Rock instructor Jon Anderson, “Fire!” is a great example of the opportunities Eagle Rock has with Rocky Mountain National Park. “It’s good for diversity, and the internships and experiences for many of the students have been life-changing,” he said.

Eagle Rock School was founded on a vision that a school could improve the lives of young people by promoting community, integrity and citizenship. The school targets students who have not been successful in more traditional settings and also offers adults professional development opportunities to help strengthen schools both­ locally and nationally. The American Honda Education Corporation was founded as a nonprofit corporation in February 1991, and funds Eagle Rock School.