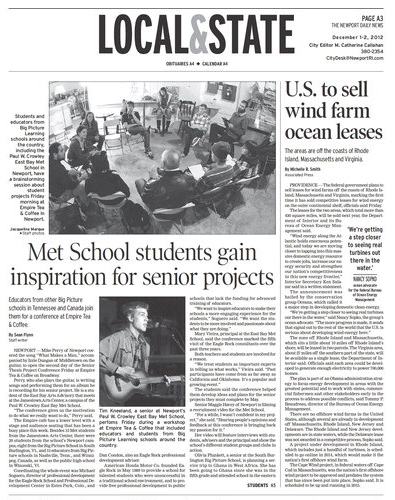 NEWPORT — Mike Perry of Newport covered the song “What Makes a Man,” accompanied by Izzie Dungan of Middletown on the guitar, to open the second day of the Senior Thesis Project Conference Friday at Empire Tea & Coffee on Broadway.

Perry, who also plays the guitar, is writing songs and performing them for an album he is recording for his senior project. He is a student of the East Bay Arts Advisory that meets at the Jamestown Arts Center, a campus of the Paul W. Crowley East Bay Met School.

“The conference gives us the motivation to do what we really want to do,” Perry said.

The Empire cafe has a lower level with a stage and audience seating that has been a busy place this week. Besides 15 Met students from the Jamestown Arts Center, there were 20 students from the school’s Newport campus, eight from the Big Picture School in South Burlington, Vt., and 13 educators from Big Picture schools in Nashville, Tenn., and Winnipeg, Canada, as well as the public high school in Winooski, Vt.

American Honda Motor Co. founded Eagle Rock in May 1989 to provide a school for talented students who were unsuccessful in a traditional school environment, and to provide free professional development to public schools that lack the funding for advanced training of educators.

“We want to inspire educators to make their schools a more engaging experience for the students,” Soguero said. “We want the students to be more involved and passionate about what they are doing.”

Mary Vieira, principal at the East Bay Met School, said the conference marked the fifth visit of the Eagle Rock consultants over the past three years.

Both teachers and students are involved for a reason.

“We treat students as important experts in telling us what works,” Vieira said. “Past participants have come from as far away as California and Oklahoma. It’s a popular and growing event.”

The students said the conference helped them develop ideas and plans for the senior projects they must complete by May.

Senior Maggie Havey of Newport is filming a recruitment video for the Met School.

“For a while, I wasn’t confident in my project,” she said. “Hearing people’s opinions and feedback at this conference is bringing back my passion for it.”

Her video will feature interviews with students, advisers and the principal and show the school’s different student groups and clubs in action.

Olivia Plunkett, a senior at the South Burlington Big Picture School, is planning a service trip to Ghana in West Africa. She has been going to Ghana since she was in the fifth grade and attended school in the eastern Volta region of the country for four months when she was a freshman.

She and another student, Leah Soule, plan to paint a mural in the Ghana school during their vacation break in April and talk with the students there about what it means to be happy in a crosscultural exchange of perceptions and ideas.

“The conference has opened my eyes for the need to do more research on how to be a teacher figure when I visit Ghana, but not to come across as someone who thinks she knows better,” Plunkett said. “The conference is important because it brings us together. We are all working toward the same goals.”

Greg Adekomaya of Newport, a senior at the East Bay Met School, is planning a documentary about different minorities in Rhode Island. He said he would include Muslims, Asians, Hispanics and African-Americans and focus on more recent immigrants. He plans to interview them to get their impressions of life in the state and the challenges they face.

The two days with the consultants, advisers and other students has “helped me be more open and put together a plan to be successful at what I am trying to do,” Adekomaya said.

His next step is to research the different minorities in the state before contacting them, he said.

“We’re expert at facilitating sustainable solutions,” he said. “We follow up with them. We are successful when they don’t need us anymore.”

Eagle Rock works with more than 70 Big Picture schools around the country, “from Los Angeles to Newport,” Soguero said.

The development of Met schools has been a success story during the past 17 years.

In 1995, then state Commissioner of Elementary and Secondary Education Peter McWalters asked Dennis Littky and Elliot Washor, then both fellows at Brown University’s Annenberg Institute, to establish a “public high school for the 21st century.” They formed a nonprofit organization, The Big Picture Co., to design and open the Metropolitan Regional and Technical Center in Providence in 1996. The school, which is state funded, became known as the Met in this state, and there now are Big Picture schools around this country and beyond.

Funding from the Bill and Melinda Gates Foundation and other state and private funding sources has allowed the Big Picture Co. to expand so rapidly.