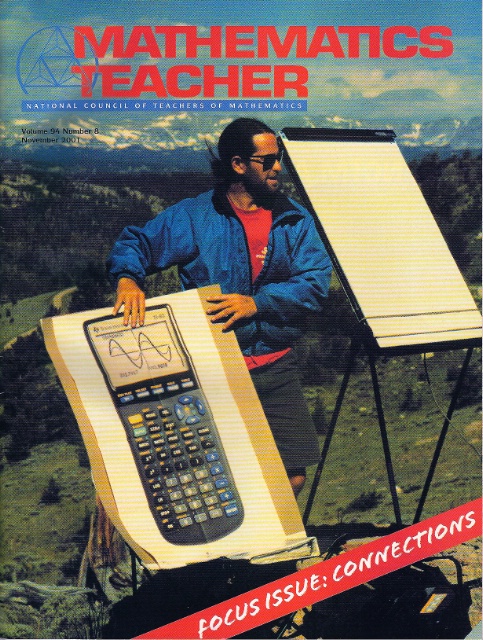 We loaded up our yellow school bus, Giovani, with sleeping bags, Coleman stoves, climbing gear, ropes, a dry-erase board, protractors, and graphing calculators.We were leaving Eagle Rock School in Colorado to embark on a three-week long road trip around Wyoming to do rock climbing and mathematics.Eagle Rock students generally have been unsuccessful in traditional schools.Many students have little background in mathematics and find it especially challenging.

Mathematics teachers often grapple with the problem of making mathematics applicable and engaging. To engage students, the rockin_ road trip class combined mathematics with the outdoors, rock climbing, geology, physics, service, environmental science, and physical education. Although we spent three weeks traveling, climbing, and doing mathematics, most of the curriculum could be done in a traditional school setting, where, for example, students can find the height of trees or of other tall objects.

We studied trigonometry by slipping it in the back door, so to speak. The students did not realize that they were using trigonometry. Before teaching any of the trigonometric functions, we selected a tree so that we could determine its height. The only tools that the students used were a tape measure and a homemade transit. The transit consisted of a string, which was tied to the base of a protractor, with a washer at the bottom. A straw served as a sighting scope.

The students showed creativity in solving the problem. For example, one student used her thumb to count the number of thumbs high the tree appeared from a distance. Then she marked off one thumb_s length at the base and calculated the height.

To formally introduce trigonometry, we took three 20-degree right triangles and discussed the changes in the ratio of the opposite side to the hypotenuse as the base changes.Most students said that if the base doubles, the ratio doubles.We generated triangles by using The Geometers_ Sketchpad, which we had on a laptop computer and on some TI-92 graphing calculators.The students were shocked to find that the ratios stayed the same, and they were excited to learn something new about all 20-degree right triangles.

As we started the rock-climbing part of our unit, students_ concerns about safety surfaced. These concerns led naturally into the study of falling objects. We looked at distance, velocity, acceleration, gravity, slope, graphing, and regressions. Using distance or velocity graphs as models, the students had to act out the graph that I had drawn by running, walking, and stopping at the appropriate times. The rest of the class then discussed how well the graph was acted out.

The students struggled at first when trying to find a way to make graphs for a falling object; they decided to time objects dropped from different heights.They devised several schemes for this study.Some climbed on the side of the school bus and dropped rocks.Someone set up a string between two trees and a pulleylike system attached to a cup that could be tipped by another string to adjust the dropping height.Some students went with an instructor to a nearby cliff to drop rocks.

Since the students in the class had very different mathematical backgrounds _ a constant challenge for us as instructors _ we used two different ways to obtain the velocity and acceleration graphs. Students with weak foundations in mathematical functions used slope, and the more knowledgeable students used the derivative.

The rockin_ road trip class was also intertwined with geology, physics, and environmental science. For example, to work with the geological maps, we used scale to create the geologic time lines. The students also computed everything from the amount that we would spend on gasoline to the number of bags of cookies that we could afford and still eat balanced meals for the entire trip.

At the end of each lesson, we did a _check in_ so that the students could let me know what worked or did not work in the day_s lesson. Students reflected that they got more out of the lessons when they were attached to their experiences, as opposed to when I just explained the mathematical concepts. Additionally, they saw the need for an environment in which students could safely challenge a person_s ideas but not the person. When this environment was missing, the students_ fears of mathematics arose and interfered with their understanding of the lesson.

The students came away with a strong conceptual understanding, problem-solving skills, and the ability to communicate the mathematical concepts. Also, they never asked the question, When am I ever going to use this? They were engaged throughout the class. One student said, _It_s the most fun I_ve ever had in school._