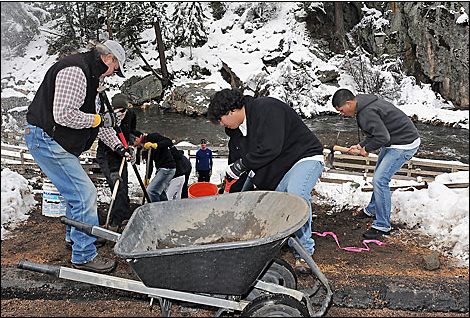 Soon, he and eight classmates from Eagle Rock School had the decayed stairs from U.S. 34 to the Big Thompson River torn apart and loaded into a pickup.

Helping people is what the staircase, handicapped ramp and fishing dock is all about.

More than 20 years ago, volunteers gathered for a weekend and built the wooden structure along the river near Waltonia (between Estes Park and Drake) to open the river’s beauty to people who couldn’t climb down to the banks.

“After the flood, a lot of rock and rubble was along the side,” said resident Bob Trout, who helped clean away the rock, plant willows and build the dock in the late 1980s.

“It was all done in one weekend. It was incredible.”

And it accomplished its goal.

Trout and other residents who frequent the Big Thompson Canyon said they see people there every day when the weather is good.

Catch-and-release anglers enjoy the dock, as do sightseers and nature lovers.

But the years have not been kind to the dock.

With no maintenance and two decades of runoff, portions have sunk, the wood has rotted and greenery has grown up through the holes in the wood, turning the haven into a hazard.

Residents Dallas and Maggie Maurer have stepped in to eliminate that danger.

“It was something that needed to be done,” said Dallas Maurer. “It was in horrible, horrible shape.

“We did it because it needed to be done, and by golly, it’s coming together We’ve got volunteers. We’ve got materials. We’ve got support.”

Three years after he first started working with the U.S. Forest Service, which owns the dock, work is under way.

And like the original project, all the labor is by volunteers who simply want to spend their time helping.

“I’m a retired teacher,” said Estes Park resident Larry Kilgore as he removed rotted wooden railings. “I had a lot of kids that were handicapped. They deserve an opportunity to do things as much as anyone else.”

For years, however, the wheelchair ramp had been riddled with holes, overgrown shrubs and a sinking base.

It won’t be for long, though.

Thanks to the Mauers, who took on the project as volunteers, workers have trimmed overgrown shrubs and bushes, moved large rocks, torn down the rotted portions and will rebuild the staircase and the handicapped ramp.

The couple also plans to make sure the new dock is maintained, so the situation doesn’t repeat 20 years down the line.

“I think it’s awesome,” said Eagle Rock student Leslie Hernandez. She took a break from digging out the stairs to look at the dock over the bubbling river surrounded by trees and wildlife.

“This is the perfect scene.”