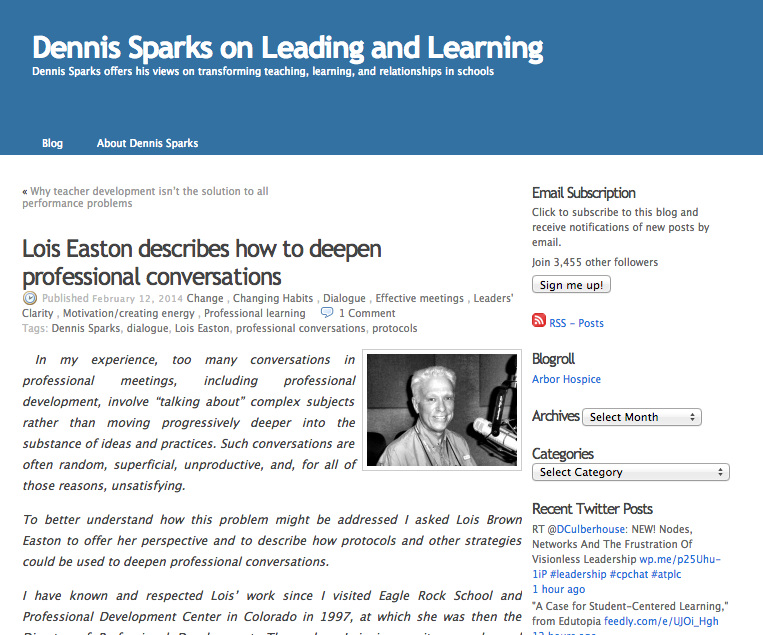 In my experience, too many conversations in professional meetings, including professional development, involve “talking about” complex subjects rather than moving progressively deeper into the substance of ideas and practices. Such conversations are often random, superficial, unproductive, and, for all of those reasons, unsatisfying.

To better understand how this problem might be addressed I asked Lois Brown Easton to offer her perspective and to describe how protocols and other strategies could be used to deepen professional conversations.

Here’s what Lois Easton has to say:

Sometimes the best-intentioned professional discussions seem to go nowhere. Polite to the last word, people leave them unsatisfied and uncommitted to making any changes in their daily practice.

And, perhaps they ARE committed, even if only subconsciously, to stay the same. After all, what has worked for X years (you put in the number, including the years simply being a K-14 student), will certainly go on working, won’t it?

At the best, such discussions may yield only the most cynical of statements, “Well, another one done. Back to work.”

Why do such discussions go nowhere? It seems to me that there are three reasons for “Nowhere Land” in terms of professional discussions:

One solution to predictable discussion is dialogue, real dialogue. Dialogue is different because people slow down the pace of talking rather than race towards a conclusion or decision. They consider each idea that is presented, building on ideas through comments and sincere questions, until they reach understanding. The uncover assumptions, explore ramifications, project possibilities. The language of dialogue is iterative and probing, as in, “Here is what I think you’re saying: ______. I’m wondering about the assumptions that you have about that idea.”

Dialogue is a skill that needs to be learned and practiced, consciously. Dialogue works for any topic that needs creative thinking, innovative solutions, and choices among surprising possibilities. Effective leaders know that juicy dialogue can be sufficient unto itself or lead to productive discussion and awesome (in the original sense of the word) decisions.

2. The discussion lacks prompts or protocols that take people deeper into the subject.

Especially when people in a discussion are speeding down the highway of decision, discussion tends to be shallow. Discussants deal with the basics in order to make the decision.

Prompts or protocols can take people deeper into discussion and, usually, into dialogue that lets them probe ideas. One protocol that seems to work well for deepening discussion is the “Peeling the Onion Protocol.”

In one version of this protocol, a presenter (anyone who can present the issue) describes what a group will study. The presenter also presents one or two key questions, such as “On what basis will we be able to make decisions about this issue? What should be our guidelines?

Then there are three rounds, during which the presenter is silent and taking notes that reflect what the other participants have said.

In round one, the focus is on clarifying the issue. Participants may say things such as, “What I heard the presenter say is . . . ” or “I’m wondering how we would describe this issue to [someone else]” or “I’m not sure I understand what we mean by [X].”

In round two, the focus is on probing the issue. Participants may say, “One assumption that we seem to be making is…,” or “A question this raises for me is …,” or “I understand this issue as….” Others listen carefully to understand what others say and rephrase, comment, or ask questions before moving on to another probing statement.

After the third round, the group is silent while the presenter reflects aloud(consulting notes taken during the rounds), further deepening the dialogue. The presenter might say something such as, “I heard you say X, and that made me think further about this issue.”

Finally, the whole group debriefs both the content and the process. At this point, the group has deeply explored the issue and may be ready for making a decision that all understand, approve, and can be accountable for.

3. The discussion does not lead to social accountability.

Decisions that come out of shallow discussions may result in accountability in the sense that someone is going to do something. Others, especially when they feel the decision is preordained—already decided in some way by those with power—may feel no sense of accountability for the decision. Since they have not really participated, probed, and pushed deeper into ideas to determine which solutions are really the best, they may feel no ownership of the issue and, likewise, unaccountable for the results.

In “Fist to Five” (with people holding up fingers on one hand to signal their commitment to an idea or decision; a fist representing no commitment and five fingers full commitment and active participation in carrying out the decision), people might show two fingers, meaning they’ll not interfere with the decision, but they will not work actively towards carrying it out.

Peer or social accountability occurs when people deeply understand an issue and its ramifications, and how they can be addressed. They have had an active role in dissecting the issue and choosing the best solution. They have “owned” the issue and feel accountable for what happens as a result of the dialogue in which they have participated. When the outcome really matters, people are willing to go deeper and stand behind the results.

So, in a circular way, in order for people to feel accountable for substantial and lasting change—such as improving learning conditions for students or adults—they must engage in deeper discussions, such as dialogue, using protocols to guide those discussions, and making decisions as a result of them that hold each one of the participants accountable.