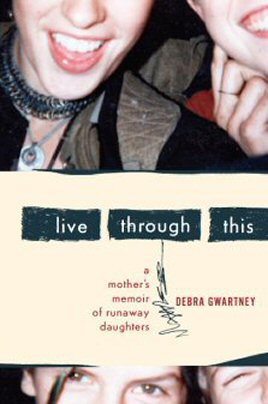 Live Through This: A Mother’s Memoir of Runaway Daughters and Reclaimed Love

After Gwartney and her husband—two people who didn’t belong in a marriage together but who couldn’t manage to find a decent way to split up—divorce, her two older daughters, barely in their teens, run away. In this bitingly honest memoir, Gwartney, a former correspondent for Newsweek, tells of her daughters’ paths of self-destruction as street children, with intervening stints in various treatment centers (among them, a state group home, the foster child program, a wilderness-therapy program). As daughters Amanda and Stephanie move back and forth between their parents’ homes of squabbles and angry rebellion and the street world of self-maiming—socially (dropping out of school), physically (drugs, scabies), emotionally (attempted suicide)—Gwartney builds a life around trying to bring them home again, into which her younger daughters, Mollie and Mary, are inexorably drawn. After a grim and frustrating two years, she is successful. Gwartney’s memoir, however, is not just about the runaways; rather it’s a reflection of her emotional state as months go by not knowing where one or the other daughter is. Her story was originally told in an episode of public radio’s This American Life. While she occasionally overwrites, she offers readers comfort and some hope. (Feb.)

“Profoundly moving memoir of the author’s agony and perseverance as she lost her two teenage daughters to the streets, and of the slow, painful reconciliation they eventually found….An achingly beautiful chronicle of unfathomable sorrow, flickering hope and quiet redemption.” –STARRED Kirkus

“Gwartney deserves high praise for her clear and lacerating prose, her refusal to assign blame or make excuses, and the stunning candor with which she offers telling glimpses into her own, and her daughters’ father’s, youthful recklessness and parental flounderings. Everyone concerned about self-destructive teens, and every survivor of her or his own wild times, will find Gwartney’s searing chronicle of her resilient family’s runaway years deeply affecting.” –Booklist

“Debra Gwartney’s Live Through This is an extraordinary, heart-driven account of daughters lost and found, of other daughters kept close along the way, and of an underworld that’s with us everywhere, but which so few of us see.”—Rick Simonson, Elliott Bay Book Company

“As I read Debra Gwartney’s harrowing memoir, I had to keep reminding myself that this was not fiction. Gwartney’s honesty about her mothering and the rawness with which she tells her story are both admirable and heartbreaking. Live Through This is utterly true, and that, combined with Gwartney’s frank storytelling, make this book unforgettable.”—Ann Hood, author of The Knitting Circle and Somewhere Off the Coast of Maine

“For all the raw power of this true story and the fearless honesty of the voice telling it, what sticks out for me is the literary craft that shapes every sentence. Debra Gwartney has seen clear to the bottom of her experience, purged it of self-righteousness, and emerged with a stunningly humane and humbled awareness of life’s troubles”—Phillip Lopate, author of Totally, Tenderly, Tragically and Portrait of My Body

“Gutsy, edgy, and revelatory, Gwartney’s fast-paced tale of a family in pieces builds to a magnificent, hard-won communion. Her ability to follow the wildness in her own story uncovers truths about every parent, every child.”—China Galland, author of Love Cemetery: Unburying the Secret History of Slaves and Longing for Darkness: Tara and the Black Madonna