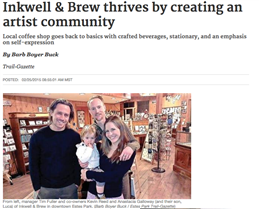 In a typical coffee shop these days, one can expect to find free wi-fi, a quick cup of coffee, and a bright atmosphere of bustling activity.

Customers certainly can find free wi-fi and a quick cup of coffee at Inkwell & Brew, but if that’s all they’re looking for they will be missing the most unique aspect of this place. Located in the heart of downtown Estes Park, what’s really on offer at this coffee and stationary shop is an opportunity to slow down, take stock, and tap into the creative juices flowing in everyone.

Kevin Reed and Tim Fuller worked for the previous owner of the shop prior to the flood. A year ago, the opportunity to acquire the business came up and Reed and his wife, Anastacia Galloway, purchased it and established Fuller as manager.

Reed and Fuller made lists of ways to improve the operation and offerings at the shop, with the ultimate goal of expanding beyond the definition of “business-as-usual” to create an artist community within the space.

“I think all coffee shops should be a place where people interact and exchange ideas, especially for artists,” said Fuller, who is also a writer. To that end, the shop offers poetry readings and art classes; future plans include reestablishing a film series, yoga classes, time for meditation, etc., Fuller said.

The upper level of the shop, filled with natural light from the surrounding windows, is a space to create. “We have all kinds of people who come here,” Fuller said. “Creative thinking workshops, psychology groups, women come to knit here.” In the next few years, Fuller envisions that the shop will obtain a liquor license and one day be able to offer wine with cheese platters, while listening to live music on an upstairs patio.

Fuller guides much of the front-of-the-house operations and programming for the space; his past experience working at Starbucks gave him the basics to work with.

“I had a lot of ideas from a corporate coffee shop on how to improve the efficiency of a small-town coffee shop,” Fuller said. “The way I would train and manage baristas, the way I would implement the serving of coffee. So we do it a lot differently that a Starbucks; (the coffee) is crafted differently.”

For example for a cup of pour-over coffee, the beans are ground to order and boiling water is poured in slowly over the filtered grounds. At first, just enough water is added to cover the grounds, creating bubbles “where the gasses escape,” Reed explained, “that’s called ‘blooming.'” Next, additional water is added to the filtered grounds to slowly fill up the cup, one drip at a time. This process can take four or five minutes, but the result is a strong cup of complex coffee, with absolutely no bitterness.

There is a similar process for the iced coffee, using cold water; “we don’t just pour brewed coffee over ice,” Reed said.

With the way the baristas are trained, ultimately this process doesn’t take much longer than at Starbucks, Fuller said. The coffee beans are roasted by Ozo Coffee of Boulder.

Other offerings in the coffee portion of the shop include traditional coffee-house fare such as cappuccinos and lattes, drip coffee, and loose-leaf tea by Tea Spot of Boulder. There is a coffee rewards club where patrons can earn free cups of coffee or even an Inkwell & Brew coffee mug.

“We’ve had a great response from the community,” Reed said, “financially, too, we were blown away by the numbers last year. But also, going beyond the financials, people appreciate that we are open every day. We’re open at 7 a.m. every day (except for Christmas, Thanksgiving, and New Year’s Day).” In the winter, the shop closes at 6 p.m.; in the summer, the hours are extended to 7 p.m.

The patrons may wander upstairs to learn to oil paint with Dawn Normali, create stained-glass window pieces with Nicole Winslow, listen to a poetry slam on Sunday night, or just write in their journal. Reed and Galloway are especially proud of the shop’s emphasis on the lost art of hand-writing letters and postcards; “we even sell stamps and postcard stamps and encourage people to write them out here,” Galloway said.

“We have created a real niche where people who are passionate about writing by hand can come,” Reed said, “We are a destination for people who come here year after year, and they thank us for providing that space for them. I am heartened by the people who appreciate that, they keep us in business.”

Galloway and Reed believe that Estes Park has a very positive business climate. “We believe there is a lot of untapped potential here,” Reed said.

“Many people seem to think of Estes Park as ‘quiet’ or ‘dead’ in winter. It doesn’t have to be that way. We’ve been thrilled with how strong business has remained for us in January and February. We hope more and more businesses, community organizations, and simply residents of Estes Park get excited about making our hometown a town that is full of energy – and people – every month of the year.”

Inkwell and Brew’s Christmas season was almost as strong as the summer season, Reed said. “And January and February have been strong, too”

Galloway said that the enthusiasm and excellent service provided by the shop’s employees has a lot to do with the success of the shop as well. The business uses modern marketing tools such as Facebook, Twitter, and Instagram and advertises locally in both newspapers and in Boulder.

Reed is from Nashville and Galloway is from Weirton, West Virginia. The couple live with their young son, Luca, at Eagle Rock School where Galloway works full time and the couple acts as house parents. “Our home is attached to a dorm-like setup and we have 10 teenage students who live ‘with’ us,” Reed explained. “We open our house to them typically 4-5 nights a week and we all hang out, cook, and talk.”

The family aspect of couple’s life philosophy extends to Inkwell and Brew, where Galloway has created a special spot for children to explore and express themselves. There are many educational and interactive products for children for sale in the area as well.

“The idea is that this space is for them (children),” she said. “So they can come and color pictures, have hot chocolate.” Nearby arm chairs are available for the accompanying adults to sit and express themselves as well.

“I’m not a neo-luddite who doesn’t like phones, but look around us,” Reed said, gesturing to the natural beauty of the Riverwalk environment that surrounds the shop. “Why do you want to constantly be on your phone? Take a break. Come in here, have a coffee, write a letter to somebody, or write in your journal.

“This is a place to unplug and recharge,” he said.

“Everyone needs to have a chance to reflect, so you’re not constantly bombarded with media,” Galloway said. ” To have time to figure out, ‘this is who I am. This is who I want to be.’ We need to cut out the unnecessary.”