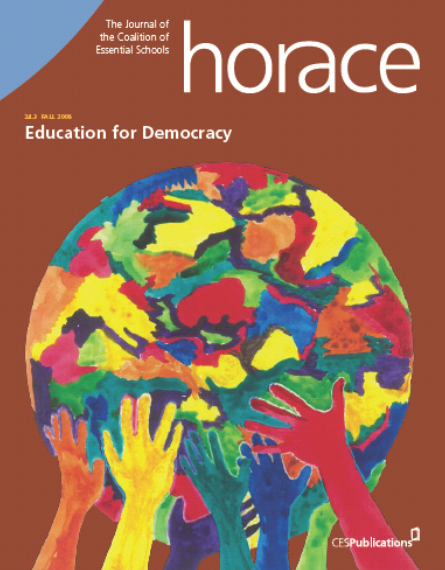 My co-teacher, Donnie, and I were in costume. He was Malcolm X. I was George Wallace. In character we spoke passages from our most famous speeches. By the end of the third minute of class, I was declaring…”Segregation today…segregation tomorrow…segregation forever!” And Donnie was warning, “White America, wake up and take heed, before it is too late!” When we asked the students what they thought of our production, they circled one there:

“I thought you sounded stupid,” one student told me.

Both speeches were rich with the high rhetoric of the Civil Rights era, I though, and asked, “Why?”

“Because you had a southern accent.”

“What about Donnie?” I probed.

“He sounded smarter because he didn’t have an accent.”

“So you decided he was smarter based on how we talked?”

This was the discussion that began our class, a class designed around the idea that if we are to be judged by how we talk, we have it in our interest to practice the way we speak. It was the summer trimester at Eagle Rock School, a small, tuition-free, residential school in Estes Park, Colorado. In the summer, teachers are encouraged to teach classes that might fall outside the traditional subject matter, and students are encouraged to take risks on classes they might otherwise skip.

Rhetoric was once a staple of the school system. It is a discipline with a long and storied past with its roots in the seminal moments of democracy. In the incipient democratic societies of ancient Greece rhetoric grew out of the new need to persuade large groups of people to come consensus. As Jay Heinrichs wrote, while no one can attribute the success or failure of a democratic society to the quality of its speakers, in the case of Syracuse, the ancient Greek fledgling democracy begged mighty Athens for a manual on rhetoric.

In democratic schools, we ask for the participation of the students. We demand it. And we have research to back up our claims that democratic classrooms and schools help ease the volatility of adolescence, boost self-esteem, and prevent frustration. Yet some students may come to the task a bit like Syracuse, begging for some instruction on how to speak confidently without risking public embarrassment. The first challenge of our class was to purge any hesitation students might have about speaking publically. Everyday, we would finish class by having a few students give impromptu speeches on topics they drew out of a hat. Some of the topics were silly, some serious, but all lent themselves to quickly formed arguments. I explained to them, “Read the topic, form an opinion, and begin. The rest will come as you proceed.” While this exercise was not intended to do anything more than shake loose their nervousness, it became a powerful experience for our students. As one student told me, “After I did a few [impromptu speeches], I felt like, if I can talk about something I don’t even care about, then it’s easy to talk about something I do care about.”

Yet, many students struggle to find something they care about. Most often the case is not that my student are too heartless or selfish to care about worldly issues. Rather, they have never been asked to form an opinion, or they have never done the research that might lead them to strong feelings.

The latter was the case for Brandi, who lamented early in our writing process, “I don’t care about anything.” As this is true for almost no one and certainly was not true for this warm, soulful 15-year-old, I politely disagreed with her and asked her about some of the world’s persistent issues: poverty, wars, politics, and free speech. While the students’ assignment was to write and present a speech on any topic of their choosing, all of my students gravitated toward important current affairs. They could have easily chosen trite, tired topics, but instead they grappled with the death penalty, HIV/AIDS, and Mexican-American identity. It makes finding evidence for a speech easier. And, more important, a controversial and timely topic makes a more interesting speech. All of my students shared the fear that they would begin to write only to find that they had nothing to articulate.

I sat Brandi in front of an online archive of Nicholas D. Kristof’s multimedia reports on some of the world’s most urgent issues by telling personal stories. The Monday after I talked with Brandi about her search for something to care about, she proudly told me that she had read an article in the newspaper about prostitution in Thailand, and she knew what she wanted to speak about. Of course it is not always so easy, but when I brainstorm with my students I emphasize that anything they would like to change is a thesis statement waiting to happen.

Students who write speeches for public performance write better than those who write papers for private grading. They pick sides. They see the other side of their argument and argue against it. While it may seem simple they every essay should make an argument, new writers often struggle with this concept. As Gerald Graff and Cathy Birkenstein remind us in They Say/I Say, “To make an impact as a writer, you need to do more than make statements that are logical, well supported, and consistent.” Interesting writing pushes up against the other side and explains why one might care to side with the writer.

I have taught students to write thesis statements that do nothing but inform the reader that China is, in fact, a country of more than one billion people. No student, however, would want to read a paper with such a mundane thesis statement in front of his or her classmates. The audience holds power over the writing process. While composition teachers often tell students to think about their audience in a hypothetical way, speechwriters have to think about the audience in a real and consequential way. The natural consequence that holds every speechwriter accountable is the fear of public humiliation. That fear, if we are to believe oft-cited surveys on the subject, exceeds even death as a motivator. Those surveys often claim it is public speaking that people fear, but surely no one fears being a successful public speaker. No, the fear is that they would fail at speaking, that they would bore their audience or worse. And so, with that fear as a motivator, my students revised as never before. They asked me to help them practice after class, and when I made suggestions about grammar or their use of sources, I was no longer an antagonist ruining their papers. They were the workers and I was their coach, helping them write a better speech. In the end, they were just as invested in demonstrating their mastery as I was. Public speaking, though featured prominently in many states’ standards, is rarely a required part of any high schools’ curriculum. Standards include it as part of Language Arts, but the art goes largely ignored to allow for more time to prepare for AP or standardized test. Teaching rhetoric consumes precious time. Most schools, including our own, have found ways to include the standard in small ways into every class. Rhetoric is everywhere and, therefore, nowhere. Secondary schools followed the lead of major universities, where, around the turn of the 20th century, rhetoric was absorbed into departments of English. English became literature, and literature, preoccupied as it is by the written word, leaves out the art of the spoken word, according to Jay Heinrichs. In the other schools, public speaking has become a specialized sport in the form of Speech and Debate teams. These teams prepare a select few but neglect the masses.

Today, English, language arts, and humanities teachers have a new set of challenges. Though public speaking may figure prominently in the standards, it defies mass standardized assessment. Imagine thousands of video entries flooding the inboxes of state assessment boards. And so, teachers have to choose between teaching posture and poise and reviewing comma rules.

For similar reasons the PLACE test, Colorado’s state test that all English teachers must pass, does little more than stab at the skills needed to teach speechmaking. One of the questions among the few that dealt with the topic asks what a particular hand gesture might imply. Such standardization is crude and unhelpful. It no more qualifies a teacher to teach public speaking than knowing the symptoms of appendicitis qualifies one to perform an appendectomy. The failure is not in our ability to test public speaking. Our failure is our in ability to see rhetoric as an essential teaching tool to motivate and empower students.

It has been years since Donnie and I taught that class on speech making. Yet, as I laid out my yearlong plans for my current English class, I remembered Brandi smiling after she delivered her speech. “I have never done anything like that before,” she told me. She was experiencing the adrenaline rush that comes from conquering fear. Teaching the spoken word is emerging as crucially important at Cristo Rey Jesuit High School, where I currently teach. Cristo Rey Jesuit High School serves under-resourced students from Minneapolis’s toughest neighborhoods. For many of my students, their ability to stay quiet and go unnoticed is a long-practiced survival strategy. This strategy, however, leads neither my students nor our democracy to success.

Our school has a work program that sends all of our students to corporate internships. They must interact with their supervisors, their co-workers, and customers with professionalism and clarity. The students, like most teenagers, are not accustomed to being asked their opinions. But the truth is, though practices in reticence, they long to be asked, and, once they know it is safe, would love to learn how to express it well. This election season, as I watched the convention speeches and debates of our two candidates for president, I remembered showing my students speeches from bygone election seasons. Together, we extracted meaning from what they said, and more importantly, how they spoke. The rhetorical devices used by the great speechmakers in American history – anaphora, chiasmus, peroration – are designed to manipulate their audiences. There is great power in seeing the mechanics of those phrases meant to stir our emotions. As we discussed these devices and saw them in the mouths of Jesse Jackson, john Kerry, and George W. Bush, my students felt like they had been let in on the secret language of political speeches. All speeches are designed to manipulate, they learned, and they learned how the speechwriters, went about the task. Members of an informed electorate must not only understand the facts; they must know how politicians can persuade us to ignore the facts.