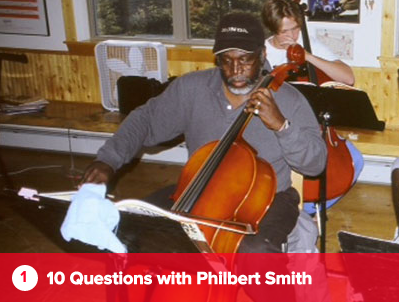 ​​​​​Almost 23 years ago, Philbert Smith arrived at Eagle Rock School (ERS) in the mountains of Colorado, just a few months after Honda established this alternative high school in Estes Park.  He’s spent these past two decades taking care of students’ familial, behavioral, medical, and mental health needs and, as he puts it, “living my life in a manner that is worthy to be a servant of the students and ERS.”  This month, after leaving a lasting impact on the lives of many students, he will retire as Director of Students.  As he looks forward to the next chapter of his life—spending time with his wife of 23 years, travelling, taking some lifelong classes—Smith took the time to speak with HondaWeb and expressed his thanks for the opportunity to serve at ERS.

1.       What were some of the biggest challenges you faced in creating culture at Eagle Rock’s inception almost 23 years ago?

Actually, the most significant challenge remains today for both faculty and students—that is to be continually vigilant and make certain that our espoused values and our lived values are the same. For many staff and students coming to Eagle Rock School [ERS] it’s like coming to terra nova [new land].

2.       In terms of your initial impression of a student vs. an actual outcome, what is the biggest surprise you have experienced at Eagle Rock?

First off—my overall view is that no young person at 16 or 17 years old is the same person they will be at 30 years old.

Oftentimes, we don’t get to see the fruit of our work. Our job at ERS is to plant seeds, provide the water of nurture and love, and do a little weeding along the way.  These are some students whose initial impressions were far different from their actual outcomes:

3.       When students first enter Eagle Rock, they embark on a 24-day wilderness trek that is often a drastic departure from their day-to-day lives.  What is the purpose of this experience, and how is it impactful, in your view?

The purpose of the Wilderness Trip is to get students ready for life and academic learning at ERS. It challenges a young person physically, mentally, spiritually, and socially. It helps to diminish the excuses one tells oneself. After rock climbing a high peak and overcoming fear, after enduring life in the backcountry or hiking 7-10 miles with a heavy pack daily, it becomes harder and harder to convince yourself you cannot do math or science. It is the most impactful experience in a student’s life at ERS. It also becomes the one binding experience that all students have in common. The students talk about it for years.

4.       Not every student is successful at Eagle Rock. With teenagers, no doubt over the years there have been disappointments. Is there anything in particular you’d like to share, and what did you learn?

Adolescents plant their foot firmly on the gas pedal with virtually no brake. I have come to learn that one should not take too much credit for their successes and one should not beat themselves up too much for their failures. I’ve had students contact me years later to apologize because they were just not ready to be at ERS at the time of their admission. We know so much more about neuroscience and the adolescent brain since 1993. The fact that the pre-frontal cortex is not fully developed in adolescence is very significant. Adults must be sensitive to the instability and issues of adolescence. Adults must have unfailing love, patience, and guidance. Set appropriate boundaries and allow adolescents to choose how they wish to behave. The focus is more about building community than compliance. Over the years, I have learned to build trust, take responsibility, and have tough empathy.

Smith blows a vuvuzela as he cheers on his house (Aspen) at a game on the Field of Dreams, Eagle Rock’s athletic field.

5.       What are some of the most important elements of culture at Eagle Rock?

Personal interaction: We are a community that thrives on relationships and making authentic human-to-human connections;

Small: No one can get lost in the crowd. I like that we know every student by name;

Value driven: Having a moral compass and knowing which direction is north is of daily importance;

Holding folks accountable: Learning to be able to take responsibility for the decisions one makes is an important lifelong skill.

6.       In your long experience, what kinds of student challenges have remained consistent, and what new issues have developed among students as society has changed?

Not having a fully formed pre-frontal cortex causes young people to take greater risks. What Socrates said holds true today— “The children now love luxury. They have bad manners, contempt for authority; they show disrespect for elders and love chatter [or texting] in place of exercise.”

The sexploitation in society, access to drugs—both illegal and prescription—and technology have had a great impact on adolescents. In a few years I’m certain there will be impactful studies on adolescent access to more potent marijuana.

We want parents to be involved. We have points of connections through phone calls, emails, houseparents and advisors. It is easier for many Colorado parents to visit, less so for those out-of-state. Parents can be the source of great support for a student. Some parents have contributed by offering their talents to the school.  Also there have been parents who have offered their home to an ERS student who was unable to go home during a trimester break.  On the B-side, sometimes parents can make things difficult by not recognizing the growth of their children.  Sometimes old issues get in the way.  As staff we often have to navigate these waters carefully.

Smith counsels a student who has come to him with a concern.

8.       After graduation, do the students stay in touch? What kinds of things do they say about how their lives may have been influenced by their Eagle Rock experience?

Social media is an excellent vehicle through which folks stay in touch. We also have an alumni network through which connections are kept. Students often talk about how impactful ERS was in their lives. Many say that coming to ERS saved their life. In general, students reflect on their experiences on the Wilderness Trip, classes, community meetings, their shortcomings with fondness. They are grateful to ERS and know that their lives would be very different than it is right now. Also many of them have become parents and are raising their children with the values of ERS.

ERS is a great example of how Honda’s Core Values are manifested and lived out daily. We are the heart, hands, feet, voice of our values. We either embody the values or they will become just words. The values are only as good as we live them.

Eagle Rock celebrated its 10th anniversary in 2003. This photo was taken at that time and features Smith (back row-3rd left) and former American Honda executives as well as former Eagle Rock Head of School Robert Burkhardt (front row, right).

10.   Eagle Rock has been described as perhaps Honda’s purest example of corporate social responsibility. In this respect, what positive impact does Eagle Rock have on society?

Eagle Rock is a great and noble intersection of public interest and corporate interest for the benefit of society. Throughout my time at ERS, I’ve heard that Honda wants to be “a company that society wants to exist.” Well, through ERS Honda touches the future. That young people have been impacted, in a life-changing manner, and have moved forward to make a meaningful contribution to society, is priceless.

The staff who have spent a season at ERS and have gone out into the world and have impacted educational policy as well as governmental and community systems is immense.

The educators who have visited ERS and have left inspired to re-imagine their craft and practice is transformative.

The indelible impact of the work of ERS Professional Development Center(PDC) with school improvement and school reform projects through professional facilitation, it’s work with teacher licensure, PDC publications, and presentations at conferences has expanded the national impact of ERS from coast-to-coast and north and south. Through ERS, Honda is not only having a positive impact on society, it is changing society through the transformation of lives.

As I leave Eagle Rock, I feel enormously blessed and privileged to have been given the opportunity to serve.  Many thanks and gratitude to Tom Dean, Mak Itabashi and Robert Burkhardt for taking a chance on me, and to Honda for giving young people who many had given up on, another chance to see The Power of Dreams.