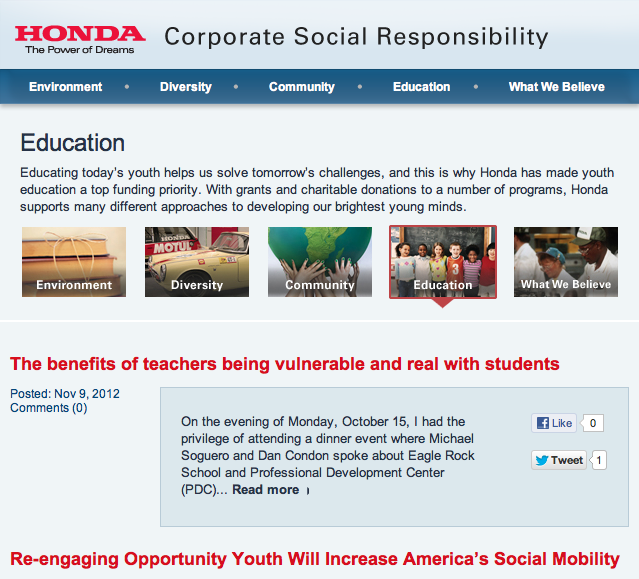 On the evening of Monday, October 15, I had the privilege of attending a dinner event where Michael Soguero and Dan Condon spoke about Eagle Rock School and Professional Development Center (PDC) to a group of more than 25 educators from a variety of schools and educational programs from all over Durham, NC. Dan and Michael work at the school through the PDC with networks of innovative, reform minded educators; their goal is to re-engage dis-engaged high school students. Because the work at PDC is grounded in a real school doing significant work, they can be far more effective than many other consultants. Let me share some aspects of their school that most impressed me.

As someone starting a small middle school in Durham in less than a year, I took particular interest in the way that Eagle Rock builds and sustains its community by having adults make themselves vulnerable. Michael spoke eloquently about how the 25-day wilderness experience at the start of each student’s Eagle Rock experience accelerates the process of adults and students being human with each other. Michael spoke about the importance of relationships, and explained that if adults want meaningful relationships with students, they need to “be vulnerable, admit mistakes and say sorry.”

At Eagle Rock, a place I am now eager to visit, teachers eat meals with students rather than separate from each other; clean-up is everyone’s job, not the job of the cleaning staff or a janitor. In all settings at Eagle Rock, from assemblies (they call them “gatherings”) to academic classes to life in the houses where students live on campus, adults are vulnerable and real with the students. These respectful and messy exchanges create a climate of trust and support that allows students to learn about themselves as people and as learners. It also allows students to get through some of the more challenging issues they may face, because they know they have the support of their Eagle Rock family.

In responding to a question about how Eagle Rock measures its success, Michael explained that Eagle Rock’s five expectations — developing an expanding knowledge base, communicating effectively, creating and making healthy life choices, participating as an engaged global citizen, and providing leadership for justice – develop skills that transcend the typical lessons most high schools deliver.

The goal at Eagle Rock is to create an engaging and meaningful educational experience on the path towards graduation. Most of the students have either discontinued their schooling or didn’t believe they would complete high school in their current setting. Eagle Rock’s mission is to work with youth to re-engage with their lives and their learning such that graduation becomes a byproduct of their new connection to a belief in themselves and their future. Michael shared a story of a young man from Washington, DC who stayed at Eagle Rock for about one year before deciding that he had gained the tools necessary to go back home and succeed. That young man, now married and a father of two, runs the IT department of a bank. His brief time at Eagle Rock meant enough that he felt compelled to return to campus. He wanted folks at Eagle Rock to know what a difference the school made for him.

That’s what schools today should be about — making a difference in students’ lives by forging deep relationships that endure. The folks at Eagle Rock reject the premise that schools as currently configured are fine and that students should conform to the norm so they are ready for “traditional” learning. Eagle Rock has a deeper purpose.

By reaching out to educators through events such as the inspiring dinner I attended in Durham, Michael and Dan are spreading the idea that a necessary first step toward a more meaningful school culture is to have adults make themselves vulnerable. Adults who find the courage to make themselves vulnerable — and to be real with students — will be able to more effectively ally with students so they can better help students reach their full potential.

About the Author: Steve Goldberg is the founder and principal of Triangle Learning Community (TLC for short), a middle school for empathetic global citizenship that will open on the 50th anniversary of Dr. King’s “I Have A Dream” speech — August 28, 2013. Steve’s blog, What I Learned Today, is an example of the sort of learning students at TLC will do on a regular basis.