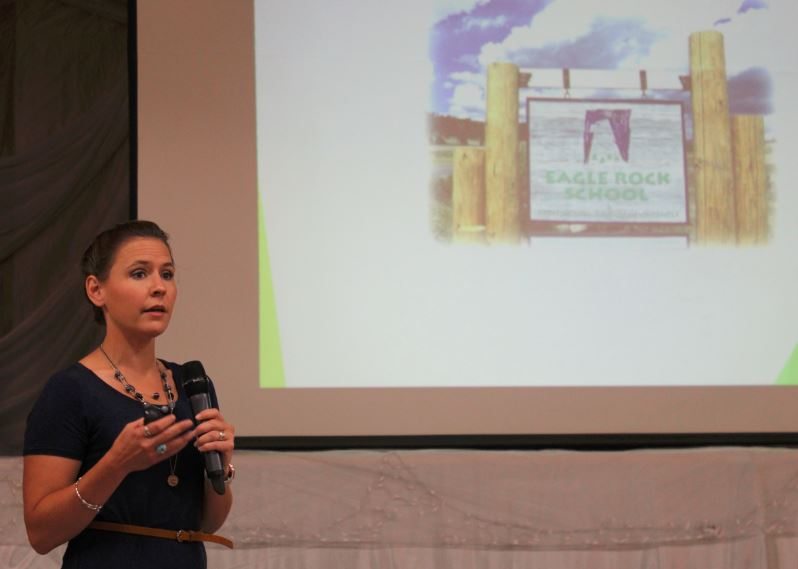 George Ash, chief executive officer of JCESC, welcomed the crowd and thanked the governing board for sponsoring the breakfast for nearly three decades. He recognized board President Larry George, who along with Vice President Ken Simeral, had a building named in his honor this past week.

A new professional development building on Estelle Avenue is now known as the George-Pugliese Training Annex, which is in tribute to the Charles M. and Theresa M. Pugliese Foundation, while the JCESC office has been renamed the Kenneth D. Simeral Building.

Ash thanked Steubenville Mayor Dominick Mucci, who was on hand, and Steubenville city leaders for supporting the acquisition for the annex. Finally, he lauded Superintendent Chuck Kokiko, who has led the educational service center since last September

He summarized JCESC’s achievements, namely the more than $900,000 in grants secured for local school districts; $590,000 in safety grants given over the past 13 years; $170,000 worth of savings through shared legal services; the implementation of a truancy liaison with the Jefferson County Juvenile Court that has helped decrease absences; trainings and other professional development that has helped more than 2,700 teachers and administrators over the past school year; $110,000 in savings through the Virtual Learning Academy; and the $32 million saved for Ohio members through the Jefferson Health Plan.

He noted that JCESC serves 82 of 88 Ohio counties through VLA and/or the health plan and is also one of eight ESC’s in the state to have accreditation through AdvancED, which serves 20 million people internationally.

He concluded that, in essence, schools were part of the proverb, “It takes a whole village to raise a child.”

“The basic meaning is that a child’s upbringing is a communal effort. The responsibility for raising a child is shared with the larger family, sometimes called the extended family,” he said. “Even the wider community gets involved, such as friends and neighbors. Children are considered a blessing from God for the whole community. I would contend that educating a child is, as well.”

Galloway said Eagle Rock’s purpose is to engage young people in education with emphasis placed on the high school level and full scholarships are provided to youth from low-income areas. Galloway also provides professional development services and has collaborated with JCESC and local schools for the past year on such events as the Principal’s Learning Academy. She has also worked with Toronto officials to address such issues as disruptive behaviors and interventions for discipline and plans to bring a team from Eagle Rock to the area on Sept. 14-15 for Common Professional Development Days and a Principal’s Collaborative event. Galloway also will host a screening of the documentary “Most Likely to Succeed” at 6 p.m. on Sept. 15 at Harrison Hills.

Jackson, who has provided legal counsel for school districts and the Jefferson Health Plan through JCESC, highlighted a series of state and federal court decisions that affect educators. The crux of his presentation focused on social media involving school employees, and Jackson said policies could be put into place to address acceptable use and disciplinary action for misconduct.