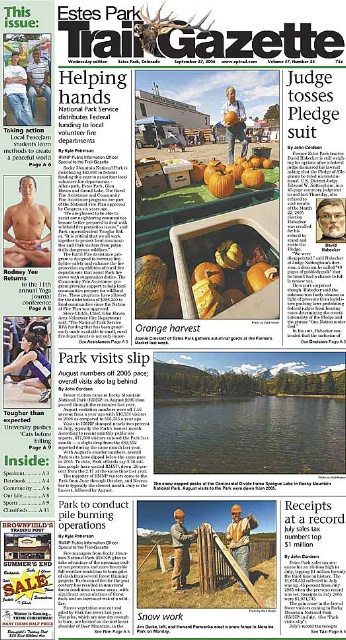 The youth of the world have a heavy burden to bear when it comes to world peace and preserving the environment. They will be the ones to reap the rewards or the devastation created by their predecessors.

Three local Eagle Rock School students and two teachers heard an urgent global call to action, urging the youth of the world to lead the way to world peace on Sept. 15, 16 and 17. Students Benjamin Fust, Amanda Hansen and Logan Sisson and teachers Cindy Elkins and John Guffey attended the 10-year anniversary of the PeaceJam Foundation at the University of Denver.

The students expected a serious weekend but also felt entertained by some of the laureates.

_They were hilarious,_ said Hansen. _Between Desmond Tutu and the Dalai Lama, those two kept bouncing back and forth._

_They had a few good messages (such as), _fight for what you believe,_ said Sisson. _I was there to support peace. What I believe in is peace. They said, _spread the word._ The way the Dalai Lama connected with me, I thought he was talking (directly) to me. He_s just so true and he speaks from his heart. He doesn_t push anything on you _ but he definitely gave me some insight on what I can do to help._

_It was a big eye opener,_ said Fust. _It was meaningful to be in the same room with them. It brought a real sense of strength to the people there._

_Jodi Williams was my favorite. She stood out the most,_ said Hansen. _She was really powerful _ in a good way _ like refined power. I_m happy that I found, not an idol, but somebody who I totally believed in what she believes in. We were on the same page.

_Jodi Williams talked to the older members of the audience. She said, _just because you are old, doesn_t give you an excuse to do nothing. Get up off your butt and go do something.__

The students broke off into small groups, or support teams, and discussed what they learned during the conference. They were randomly grouped with students from all over the world.

_They were people you could get closer to than the large group,_ said Fust. _We discussed what the laureates were trying to get across and what you thought._

Smaller groups of students also met with one individual laureate during the conference. The Eagle Rock students met with Rigoberta Menchú Tum. She was awarded the Nobel Peace Prize in 1992 for her work as a peaceful advocate of native Indian rights in Central America and for her leadership among indigenous peoples worldwide.

_She described what service meant and her tradition and gave us a chance to be really up close to her,_ said Guffey. _Her message was very much like the Dalai Lama and Jodi Williams, calling us to reclaim the democracy of our country. She (also) got into the issues that really affect her people._

_To quote Jodi Williams,_ said Hansen, __it_s time we took our country back.__

_What the laureates were reminding us was to speak as one,_ Guffey continued; _that it_s about the unity of the world and it is based on the natural world _ unifying everyone into one vision; it can_t be controlled by humans fighting each other and destroying the world._

The Eagle Rock students were challenged by the laureates to start a community project. They have begun working on a community-wide recycling program and a plan to decrease global warming.

_You can_t really have peace without an environment,_ said Hansen. _If we destroy our earth than we won_t really be here, so there_d be no purpose for peace._

Fust learned more about the need for clean water in communities across the world. He said the laureates stressed this in their speeches to the students.

__ to educate yourselves and others about it _ how people are dying from not having clean water and a source of water,_ said Fust; learning how to promote and really take care of our earth as it is. They dealt with recycling and with all the chemicals we use to make weapons to design tanks; and all the money too _ how we could be spending it in different ways._

_I thought of so many things to help other cultures and the environment throughout the world,_ said Sisson. _They were simple and they were realistic.

_I want to go to Africa and deal with the poverty group (there). I met a kid from Africa and he was so funny. I love that kid. He said, _yah, yah, you should go to Africa; that would be cool; you could get a lot done._ It inspired me to hear other people_s plans for action._

_A lot of their actions were necessity based,_ said Fust; _things that we take for granted in the United States, like building schools. It was interesting to hear from different people from around the world and different countries _ what their viewpoint of the United States is _ just how lucky we are and how much more we could be doing. They said they are thankful for what we do but could see us doing more in the future._

The students are interested in having a positive effect on their community and the world. Reaching out to the Estes Park community is important to the students at Eagle Rock School.

Their PeaceJam Community Unity tile project has already produced positive results in Estes Park. The students initiated the project, which brought the community together to paint tiles that are being installed on the entry walls of the tunnel underpass at Elkhorn Avenue and Highway 36. People from all walks of faith, organizations and community members affiliated with no particular group participated in the tile project.

Smiles can be found on the faces of onlookers at the tile site. Parents stand with their children looking for their tiles.

_Every time we go by there, people are looking at it, talking about it, loving it,_ said Elkins.

The students and teachers at Eagle Rock are committed to their new recycling project discussed at the conference.

_There is no reason why our whole community can_t be doing this,_ said Elkins, _since we live in such a beautiful place that prides itself on nature. That_s what we_ve been thinking about and how to work our way into the community respectfully, but powerfully so that we can make a change._

The students have met with Waste Management and recycling experts to create a plan. They have been studying environmental issues and have created message boards to share with the community.

_It_s really about how much you are willing to give up to preserve the environment,_ said Fust. _What_s the most efficient way to do it _ to come together as a group, as a community._

PeaceJam is an international education program, founded in Denver, and built around leading Nobel Peace Laureates who work personally with youth to pass on the spirit, skills and wisdom they embody. The goal of PeaceJam is to inspire a new generation of peacemakers who will transform their local communities, themselves and the world.

The following individual descriptions of the laureates who attended the 10th annual conference were obtained from www.peacejam.com.

Archbishop Desmond Tutu was awarded the Nobel Peace Prize in 1984 for his courageous leadership in efforts to find a nonviolent solution to the conflicts over the policy of apartheid in South Africa.

President Oscar Arias, current President of Costa Rica, was awarded the Nobel Peace Prize in 1987 for his efforts to negotiate a peaceful resolution to the years of conflict and war in Central America.

Rigoberta Menchú Tum was awarded the Nobel Peace Prize in 1992 for her work as a peaceful advocate of native Indian rights in Central America and for her leadership among indigenous peoples worldwide.

The Dalai Lama was awarded the Nobel Peace Prize in 1989 for his nonviolent efforts to resolve the Tibetan conflict and for his worldwide role as a man of peace and advocate for the environment.

Aung San Suu Kyi was awarded the Nobel Peace Prize in 1991 for her nonviolent leadership of the democratic opposition in Burma, following the principles of Gandhi. She has been under house arrest since 1989.

Mairead Corrigan Maguire and Betty Williams were presented with the Nobel Peace Prize in 1977 for their efforts to create a grassroots movement to end the violence in Northern Ireland.

Jody Williams of the International Campaign to Ban Landmines (ICBL) was awarded the Nobel Peace Prize in 1997 for her work in creating an international treaty to ban landmines and for the clearing of anti-personnel landmine fields.

Adolfo Pérez Esquivel was awarded the Nobel Peace Prize in 1980 for his leadership for human rights and true democracy for the people of Latin America.

José Ramos-Horta was presented with the Nobel Peace Prize in 1996 for his sustained efforts to end the oppression of the East Timorese people.

Sir Joseph Rotblat was awarded the Nobel Peace Prize in 1995 for their efforts to diminish the part played by nuclear arms in international politics and, in the longer run, to eliminate such arms, and for his role in creating the Pugwash Conference.

Shirin Ebadi was awarded the Nobel Peace Prize in 2003 for her efforts for democracy, peace, and women_s rights in the Middle East.