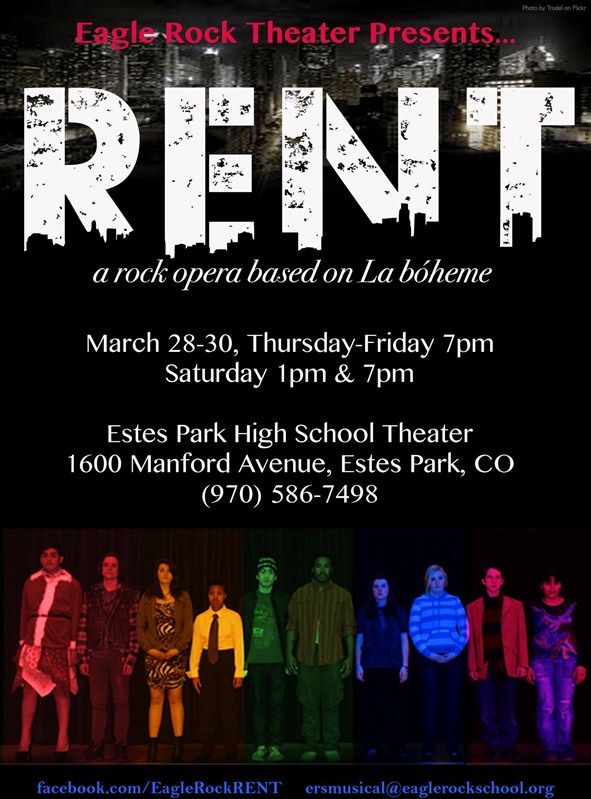 Students and faculty at Eagle Rock School are hard at work, preparing the renowned rock opera RENT for a series of performances in Estes Park during the last week of March. Directed by Ike Leslie and Jaimie LaPine and accompanied by a live four-piece band, a cast of 10 student vocalists and actors will bring the show to life at the Estes Park High School Auditorium, a wonderful in-town venue preferred by regional and national performers. The students were chosen by audition for their vocal and theatrical talents: many have a background in gospel, and received special training through the Berklee College of Music in Boston. The cast’s numerous strengths will be showcased throughout this moving and entertaining modern classic. Eagle Rock’s RENT runs Thursday through Saturday, March 28 to the 30th, 2013, with nightly 7:00 pm shows plus a 1:00 pm Saturday matinee. The show is free and open to the public.

When it premiered in 1996 at the New York Theatre Workshop, Jonathan Larson’s RENT fortuitously coincided with the 100th anniversary of La bohéme, the renowned opera upon which RENT was based. But while Giacomo Puccini’s 19th-century work portrays young Parisian bohemians dealing with landlords, love and tuberculosis, RENT’s cast of young disaffected artists and performers, philosophers and junkies, lesbians and queers seeks love and creative fulfillment in the face of the fast-approaching 21st American century, with the AIDS epidemic and the class struggle wracking New York City as a backdrop. Audiences were swept away: the show was unlike any staged before, with its stunning musical score incorporating pop, gospel, tango, blues, and rock ‘n roll, and its roster of sympathetic characters whose relevance and freshness carries through to this day. Adding to the show’s mystique, its creator Jonathan Larson–only 35 years old at the time–died suddenly following RENT’s final dress rehearsal. It is almost as if his show, his seven-year labor of love, became his own story – a reminder to celebrate life and pursue one’s dreams even in the face of death.

For some at Eagle Rock, the opportunity to do RENT is a dream come true. Danny Motta, a student from Los Angeles, will play Angel in the Eagle Rock production. “I saw RENT maybe four years ago and was so amazed and in love with the show. All I wanted was to one day play Angel on stage. I wanted to BE Angel. So it’s like my lifelong dream to have the chance to do this,” he says. Ike Leslie, Eagle Rock’s Music and Performance Instructional Specialist, also has a close connection with RENT. He explains, “Bringing a show like RENT to to the stage is a chance many directors would jump at, and I’m no exception. In an educational setting, especially for a non-traditional high school like Eagle Rock, this is an amazing opportunity for students to deeply examine what it means to be marginalized, to be a bohemian, and to have HIV/AIDS. They are forced to look at themselves in the mirror and decide where they fit into these realities.”

RENT won both a Pulitzer Prize for Drama and a Tony Award for Best Musical in 1996. It is the seventh longest-running show in Broadway history, has been made into a feature film, and productions have been mounted in upwards of 25 countries.

For more information on the show, please call 970-586-7498, email ersmusical@eaglerockschool.org, or visittinyurl.com/ersmusic. A Facebook page is also up at facebook.com/EagleRockRENT. The Eagle Rock Music and Performance Department is a proud member of the Berklee City Music Network since 2011.