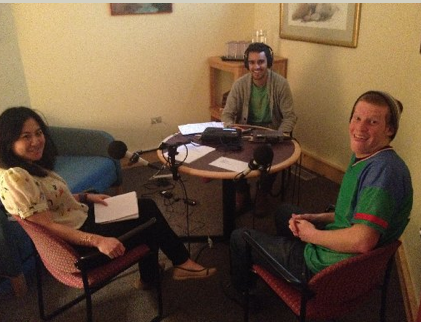 StoryCorps, the national oral history project, partnered with Eagle Rock School and Professional Development Center to record the stories of teachers and students on Dec. 9 and 10, collecting eight hours of interviews with 24 participants. StoryCorps’ National Teachers Initiative is part of the Corporation for Public Broadcasting’s “American Graduate: Let’s Make it Happen” project to help local communities across America address the dropout crisis.

The National Teachers Initiative celebrates the work of teachers across the country. By recording, sharing, and preserving their stories, StoryCorps hopes to call attention to the invaluable contributions teachers have made to this nation, celebrate and honor those who have embraced the profession as their calling, encourage teaching as a career choice, and unify the country behind its teachers — helping us all recognize that there is no more important or noble work than that of educating our nation’s children.

Among the teachers and students who participated in the National Teachers Initiative were: Tom Dean, co-founder of Eagle Rock; Robert Burkhardt, founding head of Eagle Rock; Davian Gagne, a graduate from the first class at Eagle Rock; Nyeema Lee a student from Harlem, N.Y.; Sandra Natal, a student from the Bronx, N.Y.; Vidal Carrillo, who graduated from Eagle Rock in December from Los Angeles, Calif.; Karen Ikegami, math instructor along with 18 other teachers and students.

Steve Sommer, who interviewed with student Tervion Smith reflected, “I am grateful for the opportunity, venue, and technological support to have a proper debrief with Trevion as our first trimester came to a close. During our StoryCorps interview we had time to reflect on how the skills learned during the twenty three day wilderness orientation course positively affected his life at Eagle Rock School.”

Jon Anderson, human performance and outdoor education instructional specialist, said, “The experience was a powerful one for me, and although I know I will continue to have a relationship with Vidal, it in a sense perfectly wrapped up our ER time together.”

During the 2011-2012 school year, StoryCorps will partner with individuals, institutions, community organizations, and school districts across the country to record a minimum of 625 interviews with teachers and their interview partners. The National Teachers Initiative places special attention on the work of teachers in urban and rural public school districts who are striving to increase the number of students who graduate prepared for college and careers. These stories will be archived at the American Folklife Center at the Library of Congress.

StoryCorps has collected over 40,000 interviews since it was founded in 2003, making it one of the largest collections of American voices ever created. The National Teachers Initiative is part of “American Graduate: Let’s Make it Happen,” a public media initiative supported by the Corporation for Public Broadcasting to help local communities across America address the dropout crisis. Major funding for the National Teachers Initiative is provided by the Corporation for Public Broadcasting and the Bill and Melinda Gates Foundation, with additional funding from the Joyce Foundation.

Gaspar Caro, StoryCorps facilitator stated, “We couldn’t peel ourselves away from [Eagle Rock’s] staff, students, and community despite mountain fatigue and jetlag! It was truly a unique set of recording days for us, and Mariel (Gruszko) and I are happy to see that you’re already so quickly using your interview content. The recordings were seamless and all the participants were so well prepared. That really helped us do our job properly and make sure you got the best recordings.”

Only one percent of the interviews facilitated make it to air on National Public Radio’s Morning Edition. Officials are hopeful Eagle Rock’s stories will be heard by that larger NPR audience, however, over the coming months they’ll be posting samples of the 8 hours captured at tinyurl.com/ERstorycorps.