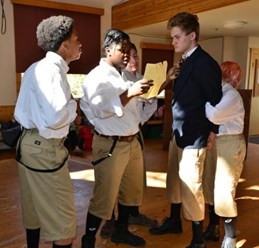 The school accepts students 15-17 old from all over the United States age at the residential campus and, the “curriculum at Eagle Rock School … is distinct from curriculum at many other independent and private schools in several ways. The goal is that every Eagle Rock graduate will be a productive, engaged citizen, ready and willing to make difference in the world.” (eaglerockschool.org)

With the school’s musical, Spring Awakening, the devastating effects of repression and ignorance in a small community are unflinchingly explored in this rock-operatic piece. Fear and confusion are the underlying emotions exhibited by the teenagers of this 19th-century German village as they mature into adulthood and budding sexuality.

The play doesn’t shy away from some of the most tragic consequences of not educating young people about victimization, sex, how to protect themselves, and how to accept themselves as uniquely imperfect human beings.

This is director’s Meghan Tokunaga-Scanlon’s first year at Eagle Rock; she is the music instructional specialist. She grew up in Aurora and Greeley and attended VanderCook College of Music in Chicago, earning her bachelor’s degree in music education. After teaching a private Catholic School and in Chicago’s public school system, she took the job at Eagle Rock.

Growing up, Tokunaga-Scanlon participating in dancing, singing, and acting; in high school, she worked at a dinner theater and participated in school plays and musicals. During and after college, she ran an after-school theater club and dance team.

She chose Spring Awakening based on her varied experience working with teenagers in performance art.

“Using theater as a means of communication and therapy helps provide our students with a healthy form of expression,” she said.

“It teaches and allows our students to demonstrate their understanding on many different levels and shows them that learning is a mixture of cognitive abilities, physical experience, and abstract thinking.

“Most importantly, it provides a experience for them to begin to understand themselves and project their learning through multi-faceted skill sets. On a musical level, the music is fun, energetic and more modern, so it easily relatable to our students.”

Tokunaga-Scanlon incorporated some adaptations to the piece, which is based on the 1891 German play by Frank Wedekind.

“Theatre is an exploratory art form that allows us to reshape traditional norms and put people in roles that the audience wouldn’t necessarily suspect,” she said.

“It also provides a new outlook for the actors and gives them a challenge to express not only a character role that they don’t necessarily relate to, but sometimes a gender role as well. It is not established that Ilse and Martha are sisters, but as with many productions, we chose to play them as sisters as to strengthen the bond they have over their abuse.

“With Hanschen and Ernst characters, we kept to the story as written, but have two females playing male roles. Also in our production, we have significantly toned down some sexual aspects, specifically nudity. While most of the productions worldwide use it, we felt that nudity was not inherently needed in our production to get the message across.”

Nevertheless, the production is sometimes raw, and not recommended for young children.

The cast includes Mikaela Bowman as Wendla; Saben Hinckley as Melchoir; Hunter Gantz as Moritz; June Jones-Knight as Ilse, Chemi Lewis and Hanschen and one of the reformatory boys; Ember Jones as Ernst and one of the reformatory boys; Emelia Eller as Martha; Ziyad Johnstone as various adult males; Brighid Scanlon as various adult females; Javonnie Campbell as Anna; Cassandra Zambrana as Thea; Nigel Taylor as Georg; and, Martin Araiza as Otto.

Spring Awakening is performed April 1-3 at the Rialto Theater in Loveland, for three free performances starting at 7 p.m. each night.