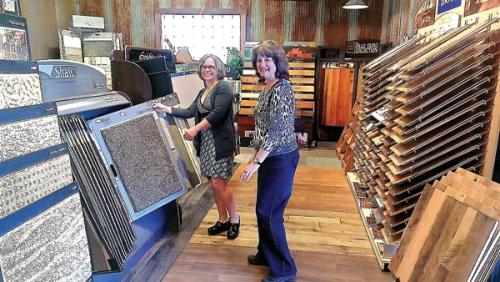 More than a year later, the fallout from the flood of 2013 is still causing many to rethink the way they do things – in life and in business. Among the tragic stories of failure and retreat, and victorious stories of success, there are probably even more stories of mixed blessings; stories played out dramatically over the past year which will continue into years to come.

After a year of unprecedented growth and business reconfiguration to meet that need, Park Flooring will be celebrating its Grand Opening at 860 Dunraven Street – a full seven months after moving into that location. Every day at noon from October 27-31, a flooring professional will be offering free instructional lectures to the public as Park Flooring celebrates weathering the storm of uncertainty and challenge during and after the flood.

“We were forced to grow our business, ready or not,” said Garth Lewis, owner of Park Flooring.

Lewis started his career in hardwood flooring in 1984 in Massachusetts when he installed, sanded and finished a floor for Benway Flooring of Vineyard Haven. “I did about 10 floors for that company over the next few months,” he recalled. That experience shaped his direction with his Master’s Degree and teaching certificate: Lewis went on to teach high school industrial instruction for eight years at Eagle Rock School and Professional Development Center in Estes Park.

“I was the first instructional specialist at Eagle Rock, teaching students applied math, social studies, and helping them create an ethic of service,” he said. As the instructor in charge of the service-learning program, “our goal was to engage the students in the meaningful service projects where they could engage in academic pursuits while serving their community.

“My students could often be seen around town volunteering in many capacities, from construction projects to human service projects.” The program Lewis developed went on to win a national award in 1996; the model has been used in other schools and made Eagle Rock a designated “leader school” in the region.

In 2000, Lewis was refinishing a floor for a friend and had no idea what to charge him, so he started calling around Estes Park to find out what other flooring specialists received for compensation.

“I found a few guys who were going out of business,” Lewis recalled. “One was leaving for health reasons, another was making a career change, and one guys was leaving because he had problems with ethical work practices. All of them basically told me they could not make a good living in Estes Park because the market was too small and the competition from ‘the valley’ guys was too much.”

But instead of being discouraged, Lewis felt he could make a go of it as a one-man operation. “I purchased a used truck, got a loan for some tools, I placed an ad in the paper, and waited for the phone to ring,” he said.

Lewis had no employees and concentrated on one floor at a time, gradually building his business and his reputation for quality wood-floor installations and maintenance.

“My formula was pretty basic,” he said, “answer phone calls within a 24-hour period, stay on schedule, provide good craftsmanship and quality products, and overall good service to my clients. ” These values which had taught his students over the years seemed to work well and his business slowly grew.

After five years, Lewis and his wife, Cathy, purchased their first location near the bowling alley off Highway 7. This allowed them to create floor displays for the various wood flooring products and provided office space for the business.

“Within a few years, it was clear we had already outgrown it,” Lewis said. A variety of receptacles, including an old school bus and several trailers, were parked behind the property to receive materials. By 2007, Park Flooring had added other flooring products including carpet, vinyl, and tile, and hired several contractors to help with the installations.

The solid base upon which his business was built was tested when the flood hit. Immediately, the focus was on quantity and quick turn-round; Lewis and his crew worked hard to maintain the quality his business was known for.

“For the first week after the flood, we did not do any paid work,” Lewis remembered. “Our current jobs were on hold because of the deluge. We tried to be as productive as we could by helping those in need for free.”

The Lewis family suffered damage in their home as well. “I took my kids around and we tore soaking-wet carpet out of neighbors homes first,” he said.

“Then we went to adjacent neighborhoods and asked people if we could help them. This was exhausting work. I remember pulling up in the company van and people would ask ‘are you going to charge me for this?’ We explained we were on a volunteer mission for the time being, just trying to be good neighbors. There would be no charge.”

A week after the flood, Park Flooring’s phone started ringing nonstop. In addition, many locals looking stopped by the shop, looking for work after being displaced in their previous positions by the flood.

“I just paired up the workers with the people in need and I let them discuss their own terms,” Lewis explained. As time went by, changing conditions called for more adjustments. “After another week, things were beginning to get toxic with mold and mildew and funky smells everywhere,” he said, “so we had to change our approach and treat the areas as toxic sites.”

The volunteer work had to come to an end; Lewis needed to get his employees back to paid work and emergency systems had to be developed to deal with the explosion of business. A big problem was getting materials – the two main delivery routes (Highways 34 and 36) were closed and to bring the badly needed carpet to Estes Park, his suppliers were charging outrageous delivery fees, or worse – were refusing to deliver at all. Additional people needed to be hired to make delivery runs via Highway 7 over Black Hawk to Denver. Material prices rose, too, and his out-of-town employees needed housing since they couldn’t travel home.

Insurmountable in that location was the immediate need for more space.

“Rolls of carpet were coming off the truck faster than we could install them. We needed to get more space, and we needed it right away,” Lewis explained.

By November, 2013, negotiations were underway to purchase the building on Dunraven. Once a garage, the space was uniquely appropriate to act as a warehouse and a showroom, with a delivery entrance off of Comanche Street and the storefront on Dunraven.

“Walking into the 2,500 square foot building we had just purchased for the business just an hour after closed on the building was both exciting and daunting,” said Lewis. But the space was utilitarian at best and money was extremely tight because of the drastic increase in the cost of doing business after the flood. Where would they get the funds to renovate the interior for a showroom?

“While I was mulling all this over in my head, I went to pick up my daughter from soccer practice,” Lewis said.

“I drove by the fairgrounds where they were in the process of tearing down some of the 1950s horse stables. They had just torn down a few of them with a back hoe, and there was a 20-foot high pile of rustic timbers and framing materials, with galvanized corrugated roofing sheets all mangled together.”

Lewis’ previous experience in reclaimed materials, including historic renovations, made him see this pile of junk a different way – “I know they are hard to find and can be expensive,” he said, “My first thought was, ‘Oh, that’s too bad, someone could have reclaimed those materials and done something very creative with them.'”

It didn’t take him long to realize that ‘someone’ could be he: “I pictured the inside of my showroom with rusted corrugated metal roofing for the walls, old barn doors as wainscoting, and the front entry done in the old timbers with a corrugated metal awning. The old western look.”

Lewis got in touch with the Town and the people it hired to do the demolition and got permission to reclaim materials from Barn C. Now there was even more work for Lewis and his employees, but they quickly disassembled what they could use from the structure: “dozens of 2X6 timbers and 75 sheets of roofing, along with many other pieces , including some cool old lights.”

From start to finish, the process took 5 months; the storefront opened in mid-renovation at the end of March and the business continued to tweak procedures, hire and train new employees, add new product lines, and most importantly – meet the continued demands for flood mitigation work in the community.

A full-time professional designer was hired to work the showroom in May.

After more than a year, “most of the flood damage work has been completed now,” Lewis said, “although we still get an occasional job related to that event.”

Overall. Lewis feels the changes forced upon his business were positive. “Our new space allows us to show our products easier and in a more creative way; and, we were able to preserve a bit of Estes Park’s history by reclaiming materials from the barns they were tearing down.” Park Flooring was able to provide essential employment immediately after the flood, when many others were forced to lay people off.

But nevertheless, it was a stressful upheaval for everyone.

“The volumes of work we had to do, repairing large-scale damage, moving into a new space so we could handle the volume, and all this while having to repair my own home’s damage and being on a port-o-potty for seven weeks,” he said. He and his crew worked long hours and weekends, and Lewis was especially affected by what he was seeing all around him.

“I noticed my clients were very distressed, most having no insurance, and having all the pressures of limited mobility and all the other stresses we were all feeling,” he said.

For its grand opening week (last week of October), Park Flooring will be offering a 10% discount on materials for any job that books an estimate and picks out materials during that time. In addition, professionals will be on hand to provide the following free lectures at noon each day: