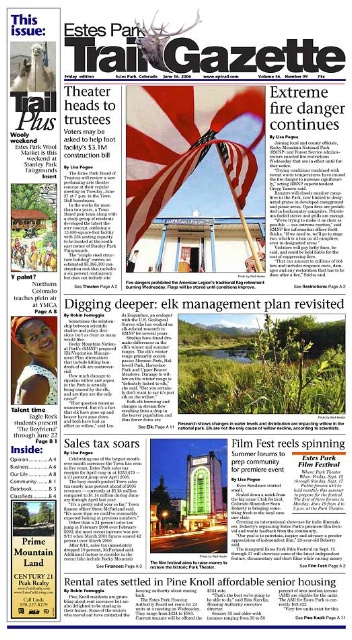 From the drawing room of Madame Dubonnet_s finishing school to the big Carnival ball, girls and boys act, sing and dance in this musical by Sandy Wilson. Set in the 1920s, dance and romance make _The Boyfriend_ a fun musical romp.

Eagle Rock School students will present _The Boyfriend_ on June 16, 17, 18, 21 and 22 at 8 p.m. Seating begins at 7:30 p.m. and the show starts promptly at 8 p.m. at the outdoor amphitheater. The show is open to the community. Tickets are $5 for adults, $3 for students and seniors. The outdoor amphitheater is wheelchair accessible. Bring blankets, lawn chairs or a picnic. There will be a snack bar available. Eagle Rock School is located at 2750 Notaiah Rd. off East Hwy 34. Turn right on Dry Gulch Road to Notaiah Road.

Eagle Rock School is a year-round, residential and full-scholarship school that enrolls young people ages 15 to 17 from around the United States in an innovative learning program. The Professional Development Center hosts educators from around the world who wish to study how to re-engage students in learning, keep them in school, help them graduate and go on to make a difference in the world.

Rick Roberts, professor from the University of San Francisco, directs the play. Roberts has been helping with the summer production at Eagle Rock for nine years.

_Two of my former students from the university came to work at Eagle Rock,_ said Roberts. _The first year they were going to do a musical, _The Wizard of Oz._ One of them, who was going to be the assistant director for that show, called and said they needed a musical director _ _what are you doing this summer?_

_I had thought about doing a show, of course, but hadn_t thought about Colorado. After hearing about the school, it sounded really intriguing and I told them I would come and do it. I came as musical director (nine years ago). This is my third show stage directing.

_What I really enjoy is preparing people to be on stage and watching them get the rewards for their hard work. I find that really rewarding. And, here in particular, some of these students haven_t even seen a musical on the stage before. Very few of them have even done one; this is all unfamiliar territory _ very different.

_So to take students from all over, very different backgrounds and very different reasons for being here and different experiences, and put them together in a show can be a very stressful situation. I think there are a lot of lessons to be learned through that process.

_This format is a vehicle for them to discover more about themselves and have a chance for personal growth. The bottom line is they learn how to work together._

Caitlin McTague arrived from Princeton this summer to help Eagle Rock students with the production. She is an intern through the volunteer council at Princeton.

_Most of the students _ this is their first time in the theater,_ McTague said. _So it_s been amazing, seeing them grow and get into their characters. I_ve been really impressed with their work ethic and their ability to learn the dance moves. This play is about getting the choreography down.

_I_ve learned a lot from working with the students because they come from such different backgrounds than I have. Just having conversations with them, I am really amazed at how they have turned around and made education such a priority, coming from such difficult backgrounds. It_s been a good learning experience._

The play _The Boyfriend_ is a _corny, fluffy comedy,_ said McTague. _All these girls are going to finishing school and looking for husbands and their goal is to get a proposal at the end of finishing school. It_s not something these students can really relate to._

Amanda Hansen plays the lead role of Polly. She has been at Eagle Rock for three months.

_I_ve done lots of shows, mostly theater. It_s corny, but I like it. It_s good corny and it_s really funny. They wore really ugly clothes and they fell in love like in five seconds. The first person they saw was their love. It_s been a challenge but I like working with Rick a lot. He puts his own style to it._

The choreographer, Leah Engelbart from Denver, _has brought so much energy and enthusiasm to the project,_ McTague said. _Devin Cruikshank, one of Roberts_ students from the University of San Francisco has been working on the lighting._

_Sharyn Gartner (Estes Park resident) is our costume designer. She_s been doing the fittings and helping us out. Two high school students, Rachael and Jason Cunningham, offered to help out. School just got out, yet they volunteered to come in at 6 a.m. Their dad, Bob Haeckenwerth, also helped out.

Act I starts out in the drawing room of Madame Dubonnet_s finishing school. The school is located at the Villa Caprice in Paris on the outskirts of Nice.

All the girls are excited about the big Carnival ball coming up. The scene opens up with them bustling in with their new costumes after the girls have asked their boyfriends to the ball. Polly is the only girl who has not joined the other girls in the festivities. The girls bug her to tell them who her mysterious boyfriend is.

In reality, Polly has been writing herself love letters and doesn_t have a boyfriend at all. She is afraid that any boy who falls in love with her is only interested in her money.

Later in the scene, Polly finds love at first sight when she meets the messenger boy, who is the son of a nobleman. The two vow to meet each other at the beach later that day.

After the first meeting of the two young lovers, Polly_s father, Percival, arrives and an old flame between him and Madame Dubonnet begins.

Act II takes place on the same afternoon on a beach in France called the Plage. The girls and their boyfriends splash and play in the water while Polly and Tony meet up secretly and plan to meet at the Carnival Ball. After their meeting, Polly mistakenly thinks Tony is a thief and feels completely betrayed. She decides not to go to the ball.

During this act there are scenes between the old lovers Madame Dubonnet and Lord Brockurst as well as the young lovers, Maisie and Bobby.

Act III culminates at the ball. Polly is forced by her friends into going to the ball and Tony finally has a chance to explain himself.

Lord and Lady Brockhurst are reunited with their son Tony and Polly learns that her prince charming is wealthy.

All the boyfriends propose and are accepted by their girlfriends. Madame Dubonnet and Percival Brown have fallen in love again and Percival asks her to marry him.