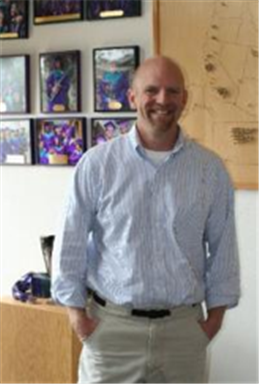 Only someone from within the structure of Eagle Rock’s amazing facility and philosophies was a strong enough candidate to fill in outgoing “founder” Robert Burkhardt’s shoes. Jeff Liddle will be taking over as the Head of Eagle Rock School in August.

“Robert is such a presence here at Eagle Rock,” says Liddle. “He was one of the founders of this school, it’s biggest supporter and a true believer in its philosophies. He will definitely be missed.”

As the change of command draws near, Liddle will simply move one space over from his desk in the open “office space” that all the Eagle Rock Staff and instructors share. “It a design by choice,” explained Liddle.

Liddle has been the “director of curriculum” for the last five years. Prior to that, he was in charge of the wilderness program and various other duties at Eagle Rock since 2000. His own philosophies and beliefs in the Eagle Rock system are what won him the title of becoming the second “Head of School” for the Honda Corporations Eagle Rock School.

Liddle believes that there are so many good things in place already at Eagle Rock and he intends to continue supporting, encouraging and building those parts of Eagle Rock. He wants to focus on the three building blocks on which Eagle Rock was built. First, is to exploit and develop the already-strong education program itself. Second, is to continue the strong relationship and service that Eagle Rock has with the town of Estes Park. Last, is to build and to bring recognition to the “dual” purpose on which Eagle Rock was founded.

Not only is Eagle Rock a high school for kids who struggle within the traditional educational settings, it’s also a professional development center for teachers and educators from around the United States. In fact, one of their biggest missions is to help educate other educators on how to recognize, help and teach students that don’t follow the traditional. “Eagle Rock puts into practice various skills and thoughts to see how they help students,” says Liddle. “That’s what Eagle Rock is known for and what we believe in. Researchers can research it, we actually try it.”

Having lived here since 2000, Liddle and his wife, Nannette Chisholm, have been married for 24 years. They have two boys. Max, age 19, is currently attending United World College in India and will graduate in May and then begin college at Quest University in Canada. Ben is a freshman at Estes Park High School and keeps himself busy doing all the things that freshmen do.

Liddle grew up in the Pittsburgh area and attended Slippery Rock University. He studied resource management and immediately found himself in outdoor education and leadership. His experience that led him to Eagle Rock includes leading wilderness camping trips for disadvantaged kids and programs, and working with the YMCA and their inter-city youth programs and camping trips.

Even with the newness of taking the reign, Jeff Liddle has time, experience and future goals that will be sure to continue Eagle Rock’s success and growth.