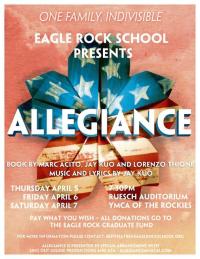 Eagle Rock School is performing their annual musical next week on Thursday, April 5 to Saturday April 7 at the Ruesch Auditorium at the YMCA of the Rockies where they will showcase their talented students in a performance of “Allegiance.”

All three shows start at 7:30 p.m. and entry is a free-will donation. The students are lead by Eagle Rock’s music teacher/director Meghan Tokunaga-Scanlon, who has been at Eagle Rock for almost four years.

“Allegiance” is a period musical and is born from the mind of George Takei, who is probably best known for his portrayal of Mr. Sulu in the original Star Trek franchise.

Takei is Japanese, and during World War II his family was sent to an internment camp like thousands of other Japanese Americans. “Allegiance” is based on those experiences in that internment camp, focusing on a number of Japanese families as they struggle to live locked away far from their home in California.

Tokunaga-Scanlon is also Japanese, and while that period of history was discussed in her household, she realizes it isn’t in other homes. Showcasing this story was an opportunity to start a conversation.

“Especially with what is going on in our country right now, I think this is a great show to start a dialogue and bring awareness to this time period,” Tokunaga-Scanlon said.

The serious topic is not new for Tokunaga-Scanlon, who likes to pick unique shows that can have a more complicated message or content.

“I like to pick shows that are a little bit different, with hefty content,” Tokunaga-Scanlon said. “I actively seek out something more complicated, and wanted to do something different.”

She said that “Allegiance” fell into their lap, as far as gaining the rights to perform goes. She simply contacted them, and once she found out the rights were available, she and her students got to work.

Eagle Rock is on a trimester system, and at the end of every winter trimester they perform a musical. There are 14 students in the show, which is a class, along with about five staff members.

Tokunaga-Scanlon said that the cast is pretty new, with only two or three students returning to the class from last year. They all auditioned in November, and have been practicing since December on the production. For the first five weeks of the power standard class, which is the equivalent of an advanced placement class at Eagle Rock, the students had two hours of class time in the morning, and two hours in the afternoon.

“Because it is a power standard class, it is longer in length and has a lot more rigor,” Tokunaga-Scanlon said. “They rehearse in class but there are other components to it, like a history component where the students learn about the history of Japanese internment camps, but also theater education as well. It is a pretty intensive class.”

She starts each class period with some meditation, which helps gets everyone on the same track, and she always gives a lot of attention and affirmation to the students who may have never done anything like this before. Tokunaga-Scanlon said that she really ups the ante on professionalism after those first five weeks though.

“This allows the students to experience what it means to be an actor or musician in this field. We get really [strict] about time and time management, so they can really experience what that is like at their age,” Tokunaga-Scanlon said.

She said that this class creates an environment that will show students what they are capable of, and that with time and effort, they can accomplish whatever they set their minds to.

“They should feel proud of themselves, and if they become artists that is great, but [whatever they do in the future] they will have this experience in the field,” Tokunaga-Scanlon said.

She hopes on a broader level, this production brings awareness to the topic in the community.

“I want to bring awareness to these events, not just for students and staff, but for the community of Estes, and engage in dialogue and really make those historical and societal connections,” Tokunaga-Scanlon said. “We hope something like this makes people more curious, with more love and understanding.”

All donations will go toward the Eagle Rock Graduate Fund and each performance will also have Japanese snacks and green tea available.