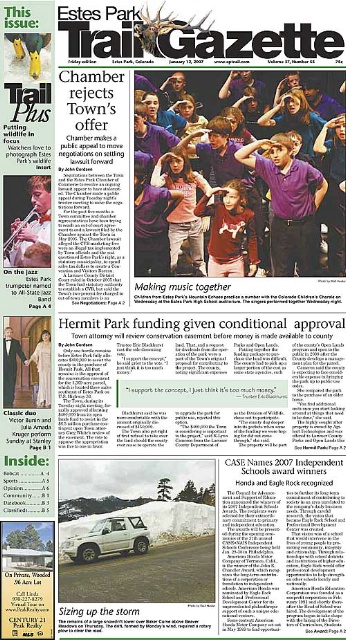 Governor Ritter honored AmeriCorps and other volunteer efforts today at the 2010 Governor’s Service Awards ceremony. Recipients were honored for their outstanding contributions to community service work throughout Colorado. The awards were given by the Governor’s Commission on Community Service (GCCS).

Governor Bill Ritter proclaimed the week of May 8 – 15, 2010 as AmeriCorps Week in Colorado, spotlighting the vital work done by AmeriCorps members in communities across the state since the national service program began 16 years ago.

The Governor stated, “AmeriCorps Week provides us the opportunity… to shine the spot light on AmeriCorps … We look at AmeriCorps and the work that they do in Colorado and see them tackling the toughest of problems…”

The Recipient of the 2010 AmeriCorps Alums “Still Getting Things Done” Governor’s Service Awards is Dan Condon of Boulder, Colorado.

Prepared remarks honoring Dan Condon as read by Lindsay Morgan Tracy, chair of the Governor’s Commission on Community Service: “This award recognizes the exceptional impact of one Colorado AmeriCorps Alum whose commitment to embody service beyond their term of AmeriCorps service, continues to bring about positive community change.

This year’s recipient of the Governor’s Service Award for Still Getting Things Done (AmeriCorps Alum) is Dan Condon.

Dan Condon served in the inaugural AmeriCorps class of 1994. Following his year with AmeriCorps, he guided other youth into the path of service when he started his career at the Public Allies in Milwaukee, Wisconsin. After working for seven years with Public Allies, Inc., Dan founded the sole Public Allies, Inc. site in the state of Colorado; located in Estes Park. Early in his National Service career Dan was selected as one of twenty young visionaries of 1996 by Who Cares Magazine.

Dan now serves as a grant reviewer for the Corporation for National and Community Service. Dan has spoken multiple times at the National Conference on Volunteering and Service, including presenting a featured Immersion Learning Session on Asset Based Community Development. Dan has done many amazing things in his lifetime. One in particular was being selected to march in President Obama’s Inaugural Parade with the AmeriCorps Alums contingency. In February, Dan was honored as one of “40 Under Forty” by the Boulder County Business Report where the following appeared: “Dan Condon took Eagle Rock School’s Professional Development Center in Estes Park from a place that occasionally hosted workshops to a national leader in providing training for visiting educators, a producer of award-winning DVD’s, multiple books and articles, and a key player in national school reform…He has the potential to greatly impact public education in Boulder Valley, Colorado and the United States in the coming decade in order to make education for all children more equitable.”

Dan’s commitment to service and AmeriCorps is unwavering. Dan embodies the vision and hope for AmeriCorps members. He is genuine, he continually gives back, and more importantly, he is a proud ambassador of AmeriCorps and its vision to impact others into the service sector.

Please join me in congratulating Dan Condon, this year’s recipient of the Governor’s Service Award for the AmeriCorps Alum: Still Getting Things Done.”

For more information on the Governor’s Service Awards, please contact the GCCS at 303.866.6426 or visit www.colorado.gov/gccs.