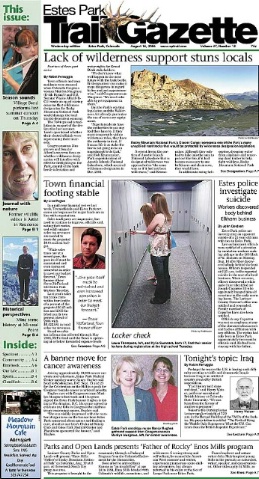 Roy Romer’s casual attire at Thursday’s grand opening of the Eagle Rock School was in keeping with the unconventional education that is the school’s hallmark.

The residential high school and professional training center was hailed by Romer for its innovative approach to education, which the governor said represented his basic principles of “developing the human potential.”

“You’re doing a very unique thing here at this school,” he told around 100 supporters attending an invitation-only dedication ceremony.

Following the path of informality tread by his tennis shoes, Romer also discarded his prepared speech, choosing instead to speak directly to Eagle Rock’s students.

“What is your place in history? Who preceded you?” he asked.

Romer said the school’s flexible approach to curriculum, in which each student learns at his or her own pace, is an admirable concept.

“You’re developing a lifestyle that says there’s something unique in each one of you,” he said.

“Life doesn’t come to you in multiple-choice questions. It comes to you in problems that you need to solve.”

He said the school’s willingness to cultivate individualism and potential in youths that have had problems learning in traditional settings should be emulated in all schools.

“I honor you for not giving up on anyone,” Romer said.

“Of all the things I value, the first is an opportunity to learn and to learn in community,” he continued.

“What you’re really going to remember in life, it’s not what you did but who you did it with.”

Romer recalled a recent trip to Prineville, Ore., where he attended funeral services for volunteer firefighters who died in Colorado.

He said a grieving mother helped him better understand the importance of human life, and Romer drew a parallel to the caring and love fostered at Eagle Rock.

He said the mother embraced him for five minutes and then asked him about his children.

Romer replied he had seven.

“Go home and call each one of them and tell them that they’re special,” the mother advised.

Makoto Itabashi, president of the American Honda Education Corp., which underwrites all costs for the school, echoed Romer’s belief in the human spirit.

Itabashi explained that Eagle Rock was born out of American Honda Motor Co.’s desire to be a productive corporate neighbor.

“It is a dream that has brought us here today,” Itabashi said.

“It is a dream come true, but it is a dream very much rooted in our own lives and the youths of America.”

Itabashi said the goal of Eagle Rock will be to help all students realize their own dreams and ambitions.

He said Honda’s intent to provide a meaningful service project went beyond simply giving money, and instead tried to “make a difference in the world.”

“We aimed high,” he said. “Our interests went beyond simply helping these youths become productive students.”

Itabashi said the cross-cultural enrollment requirements are also relevant to the learning process.

Student enrollment is regimented to include an equal mix of males and females; rural, urban, and suburban; and ethnic backgrounds.

Itabashi said the mix will be useful “so students don’t lose their way when going into an equally diverse country.”

He acknowledged Eagle Rock has its skeptics, but said time will prove its worth.

“Eagle Rock School and Professional Development Center is only one car on America’s education highway,” Itabashi explained. “At Honda, we know nothing can happen until someone starts the engine.”

He said the company’s “challenging spirit” is dedicated to making the school work.

“The easy way has never been the Honda way,” Amemiya said.

He said the school’s design is patterned after the beliefs of the company’s founder, Soichiro Honda.

He said the absence of walls is in keeping with Honda’s belief that walls create barriers between the company and community.

U.S. Rep. Wayne Allard also joined in congratulations on Eagle Rock’s opening, noting that Honda has provided a school in which the state and Estes Park can be proud.

“Knowledge and wisdom can be put together for a lot of young people in society whose door has been slammed shut,” he said.

He said the primary objectives were a concept that would be innovative in keeping with Honda’s reputation for innovative products, and a project that would allow for active involvement apart from the company’s business needs.

A third criterion, Dean said, was a long-term commitment, which Eagle Rock embodies.

Dean said the school’s curriculum is patterned after the successes that have occurred in other school systems, based primarily on individual learning plans and assessments.

He said the facility’s role as a demonstration school will gain importance in the years to come as Eagle Rock shares methodologies with other educators who will be able to apply the concepts in their own schools.

“It is truly a learning and living community,” Dean said.

The evolution of Eagle Rock has carried a high cost.

Dean said Honda has spend $17 million to date for land and facilities, of which around $12.5 million was applied to new construction on the 640-acre campus.

The school has set aside 490 acres as permanent open space.

Dean said Honda’s contribution for an annual operating budget is around $2 million, but noted that the total is expected to grow to $4 million when enrollment reaches its target level of 96.

The school currently houses 48 students, aged 15 to 18, who benefit from a 5:1 student-teacher ratio.

Sixteen more students will join Eagle Rock at trimester breaks in January, May and September.

All incoming students are indoctrinated with a 21-day wilderness outing intended to build self-esteem.

Dean said it is still too early to assess the impacts Eagle Rock’s educational approach will have on education, but he is definitely optimistic.

“Educators all over the country will be looking very closely at what is happening here,” he said.