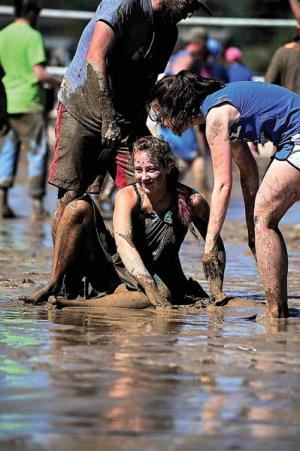 “We are still collecting money from silent auction winners and will hopefully have our final donation amount to give to Northern Colorado Flood Recovery by the end of next week,” reported Cindy Elkins, one of the organizers of the Rocky Mountain Mud Volleyball benefit tournament. Nine teams participated in the tournament which was held at the Fairgrounds at Stanley Park on September 20.

The event was emceed by Kris Hazelton and the Estes Valley Fire Department kept the tournament grounds muddy and hosed off all the players after the event.

The team, “It Doesn’t Matter if You’re Black or White” of Denver won the best costume prize (an Oskar Blues Gift Card); the best sportsmanship award went to “The Oympians” of Estes Park, an Eagle Rock student team who won passes to the Open Air Adventure Park; Lynn Sandusky of RAS Design Group, San Francisco, traveled the furthest and won a pair of knee pads from Sports Authority.

The tournament was held for the benefit of flood recovery; donations are still being accepted online at rockymountainmudvolleyball.com or checks can be made out to EP Flood Mud P. O. Box 776, Estes Park, CO 80517.