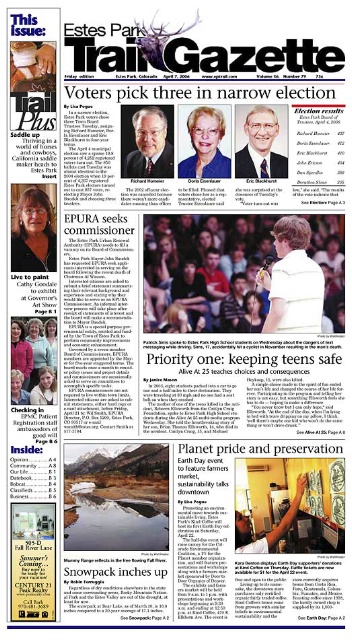 On April 7th, 2006, five of Eagle Rock School_s most cherished veterans received their diplomas bringing the total number of graduates to 113. Jazmin Campos, David Courtney, Dexter Friedman, Vionel Ortiz and Alex Vukodinovich donned the purple gown in celebration of their efforts and accomplishments.

Hailing from the Bronx, New York, Jazmin Campos began her journey ER 29 (Winter 2003). During her time here, Jaz_s integrity met many challenges, from the intellectual rigor of Latin, to the aesthetic demands of a soloist in a cappella. Jaz_s direct honesty and charismatic leadership will be missed by many. In looking back, she reflects, “I don_t think any of us realized how hard this was going to be. You constantly have to say to yourself, ‘Do I really want this?'” Jaz will return to New York to attend college (Eugene Lang) studying the field of Historical and Social Inquiry.

David Courtney left Durango, Colorado to enter Eagle Rock during ER 28 (Fall 2002). While here, David really enjoyed the Society and Culture_s program, especially the _Close Up_ and _Is Democracy Fair_ classes, which expanded and heightened his awareness of how governments work. David emerged into an involved, committed leader while at Eagle Rock, remarking, Eagle Rock pushed me to change a lot of things. That was really hard for me, especially at first.” He has earned the right to be proud of the knowledge acquired here and is deeply appreciative of those who supported him along the way. David will be heading to school on the East Coast to begin studying political science and public relations.

Dexter Friedman came in ER 26(Winter 2002) from Venice, California. Through classes at Eagle Rock, Dexter has rediscovered friendships with math and science and also discovered a new passion in the art process of Batik (hand-painting fabrics). Dexter_s dry humor and penetrating wit have kept him going en route to his proudest accomplishment_graduation. “It_s crazy. I can_t believe this. I look around the room and I realize that only a small percentage of ERS students have the perseverance to graduate from here and I feel very blessed to be one of those students. I feel that perseverance is the most necessary quality to graduate from here.” Dexter will be heading to Boston to pursue his interest in sociology.

Vionel Ortiz traveled from Manhattan, New York to begin her Eagle Rock experience ER 24 (Summer 2002). Vionel embodies a rare passion and spirit for everything she does. Those passions found natural outlets here through theatre productions like Guys and Dolls and through her poetic writing. In looking back, she shares, “Eagle Rock challenged me to just grow as a person and look internally at who I was and decide if that was the person I wanted to be. A lot of people don_t know they_re in control of who they are.” Vionel_s mature, insightful voice and sunny smiles will be missed as she heads to either New York or Puerto Rico to learn more about her various interests ranging from fashion to political science.

Alex Vukodinovich made the short trip from Fort Collins, Colorado to become a member of ER 28 (Fall 2002). Alex was impressed by the quality of teaching here and is thankful to all those who helped him discover how much he loves to learn. His strong quiet presence anchored many classes and intramural teams as he learned to interact with a variety of different styles, skills, and beliefs. Alex has always liked to draw and will be heading to the Boston Architectural Center to continue his life-long passion for architecture. “I love the intentionality. Nothing is a mistake. Everything is thought out and a creative expression. I love thinking that someone will be having memories in a space I designed.”