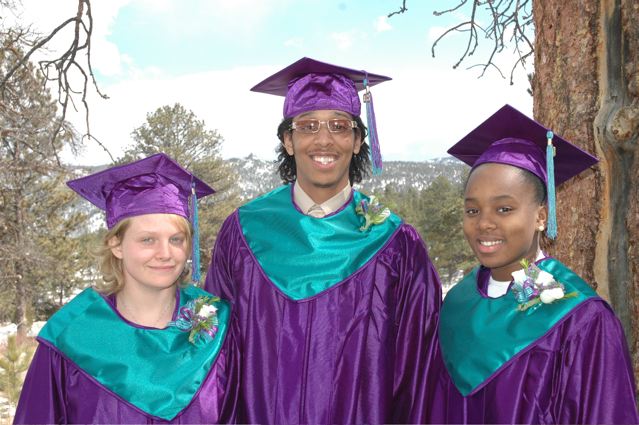 On April 11, 2008, three students received their diplomas and achieved their goal of graduating from Eagle Rock School. Delicia Jones, Amanda Hansen and Asha Thompson are ready to put what they’ve learned on campus into practice out on their own.

Delicia Jones came to Eagle Rock in ER-37 from New York City. During her time here, Delicia has learned many things, but one of the biggest lessons is that “service learning is more than just picking up trash and doing what people want you to do to help them. Service helps me learn about myself.” She realizes how important service projects are to communities and does more volunteering and service now than she had before coming to ERS. Some of her fondest service memories were building a green house bed in the bioshelter and repairing a chair for Furniture Connections.

Delicia has also learned how to be a stronger leader because “you get a lot of practice being at ERS. You have to speak up things based on how you feel about it and that makes you become a better leader.” She is more confident in change to happen, whereas before she was pessimistic that things could never get better for her and the people she cared for. Now she is not afraid to speak up for change and making life better. Another subject that Delicia is passionate about is science of which learning how things work particularly enthralls her. She would like to continue studying applied science at the collegiate level and dreams of one day working as an epidemiological researcher in poorer countries focusing on how disease travels and mutates among poorer populations.

Although she loves the big, fast-paced world of New York City, forming close friendships in a small community is something she will miss, as well as the natural beauty of Eagle Rock, but it is time to move on. To her fellow graduates, Delicia is proud of them, like they are proud of her. They have all worked really hard and grown so much over the years. While she is excited to graduate with them, Delicia is also happy that they are moving on with their lives on to bigger and better things.

Asha Thompson hails from many places, but still calls Maryland home. He came to Eagle Rock because he wanted to change his life and throughout his time here, he has become a more compassionate and understanding person as well as a more knowledgeable global citizen. He has also discovered his passion for helping youth, and would like to continue exploring new and diverse programs for youth to give them new solutions and alternatives. He found a creative way to combine his interest in law and justice by working on an early proposal to give students more options and more transparency regarding being sent home from Eagle Rock. His belief that a group of people should act as the decision makers for whether a student stayed or went became a base for the Restorative Justice program to take root. He hopes to further this passion by attending college or the police academy in the near future, but eventually coming back to Eagle Rock one day as the Head of Students.

On a lighter note, Asha’s favorite memory from Eagle Rock is intramurals from the summer of ER-36 (2005). Everyone participated, even the athletically challenged, and really went full throttle and competed hard against each other. Plus, there was a fantastic BBQ lunch waiting for everyone on those beautiful, sunny, Colorado days on the field of dreams. Now that he is leaving, Asha will miss his peers, staff, the whole Eagle Rock community and the support once he is out on his own. As for his fellow graduates, he jokingly claims that Amanda should be a herbologist and Delicia should be a judge, but is both proud and happy to walk across the stage with them at graduation.

Amanda Hansen comes from Los Angeles, California. She has done a complete 180 degree spin from where she started and who she is now: “At one point, I had no idea who I was, but now I know and strive to be who I want to be.” Amanda is passionate about everything, especially white water rafting, working outdoors and traveling. Her immediate summer plans already include working as an assistant white water raft guide in northern California. Then Amanda would like to travel, domestically then internationally. Her hopeful destinations are Africa, New Zealand, Cuba and Italy, Ireland, and pretty much everywhere else in between. Down the road, she would like to live in a developing country and work for a non-profit with a focus on helping war victims. Eventually she would also like to attend Prescott College because it is “like a sister school of Eagle Rock with small classes, community and sustainable organic food.”

She will miss the love and support of Eagle Rock, yet she leaves with fond memories and learning experiences too. She has learned through the class Hemped Out Healing that simple decisions people make, affect everyone around them, and on a personal level, that what she eats can affect who she is. Amanda also possesses an infinite passion for art, which can be seen in her many creative projects on campus, especially her feng shui harmony symbol made of metal, wood and rocks behind Piñon house. While she has enjoyed being at Eagle Rock, Amanda is excited to move on. To her fellow graduates, she loves them both and wouldn’t want to be graduating with anyone else.