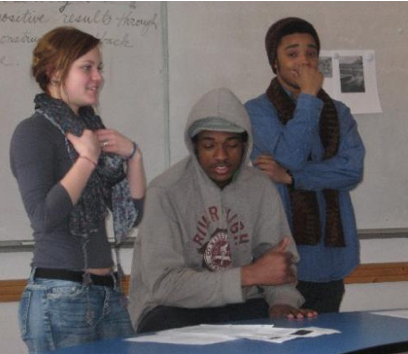 Lily Lake has some “likes” — not on Facebook necessarily, but at Eagle Rock School in Estes Park. Students of Eagle Rock instructor John Guffey presented their first attempts at advocating for the Rocky Mountain National Park site of Lily Lake and the dam there, on Monday at Eagle Rock School. Six students debated the issue: Jonathon, 16, from Los Angeles; Dereck, 18, from New York; Taya, 17, from Boulder; Maya, 17, from Boulder; Darnell, from Cleveland; and Malik, from New York City.

Residents Ron Norris — an advocacy workshop planner, Rebecca Urquhart — president of the Estes Valley Land Trust, and Scott Rashid, who lectures on birds and owls for the Rocky Mountain Nature Association, offered critiques and support. Overall, they said the students presented some good ideas the park should consider in their plans for Lily Lake.

Among those ideas are using the help of Eagle Rock students to inform the community on the issues surrounding whether the dam at Lily Lake should be rebuilt or demolished; including student input on the project and contractors; and using Eagle Rock students/volunteers to perform any labor necessary.

Urquhart said after the presentation that the Land Trust and a coalition of citizens had donated $315,000 toward the purchase of water rights at Lily Lake in 1989 and 1990, and then transferred those rights to the park. That’s one of the key reasons there is no development in the area, she said.

Students talked of the effects on people and wildlife in the area, possible flooding and mitigation efforts, cost-benefits, environment and tourism.

Norris said, “You folks have ideas that can influence” the conversation and the students may be able to help effect a decision. Both groups of students talked about using student help with the project. They can help the park service, the community and fellow students through their efforts, he said.

Urquhart asked whether the $1.5 million to rebuild the dam and the $30,000 a year to maintain it could be better spent elsewhere within the park system. Norris suggested a project to reintroduce wolves into the park, and Guffey proposed a shuttle bus system to Lily Lake, thereby reducing pollution and affecting the pine-beetle problem.

Rashid encouraged students to include information on endangered species.

“The more detailed information you can give the public, the more heartstrings you can pull,” he said.

Norris pointed out that advocates should not get discouraged during the process. It took Enos Mills 15 years of advocacy to get Rocky Mountain National Park established, he said.