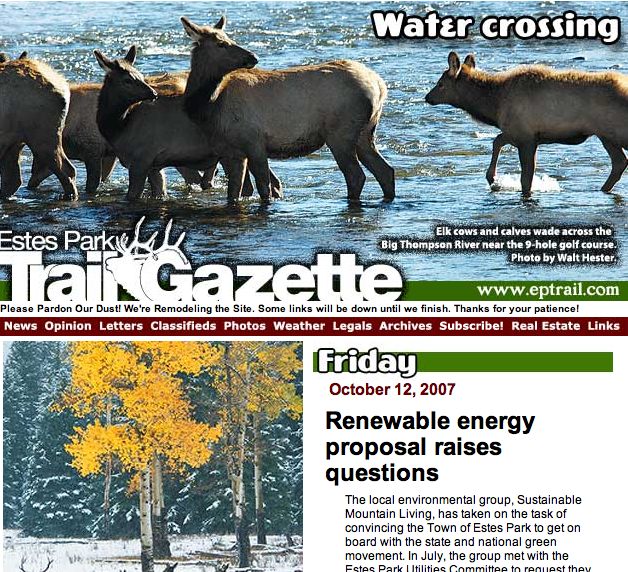 This Thanksgiving turned out to be an extreme learning experience for eight Eagle Rock School students. As part of the service-learning curriculum, Tim Phelps, instructional specialist and chef instructor at Eagle Rock School, took a select group of students to Potato Creek/Pine Ridge Reservation to deliver a holiday meal and Christmas presents to the poorest segment of American society, the Lakota people in Potato Creek and Pine Ridge, S.D.

The students got to know some of the people there, listened and learned about their culture. Phelps told a friend of his in an e-mail, “The trip to Pine Ridge went really well. A lot of folks had their world’s rocked, a lot of cultural exchange, tears, sobbing, anger, laughter and deep moments of reflection — life outside the comfort zone — where life really happens.”

Pine Ridge Reservation is the poorest area in the nation. Many of the people are too poor to own vehicles in order to travel to jobs and the nearest town to obtain employment is Rapid City, S.D. — two hours away.

“It’s a third world country within our borders,” said Phelps. “The two poorest counties in the United States are on the Pine Ridge Reservation.”

“The Y donated stuff to Crossroads [Ministry] and Annie [Meulener] had linens and things — she’s one of my usual folks. The Best Western ordered linens and the wrong stuff came in. The company said, keep it and donate it.”

Every year, the Estes Park community donates items to Eagle Rock School and Phelps takes a select group of students to the reservation so they can experience the gift of giving. There, the students examine the Native American culture and the history that created the environment that they live in today — an environment with little resources, even fewer jobs and long distances to travel for goods and services. But it is the land that was bequeathed by the U.S. Government to the Lakota many years ago, and in the struggle to survive as an independent people, they continue to live on the reservation to keep their culture alive.

“It was really an exceptional and poignant trip,” said Phelps. “It rocked their worlds this time. We were able to unload our U-Haul early enough to get the U-Haul into Rapid, which is a couple hours away. And then we took the bus and the Yukon up to Crazy Horse, and they got to see what that was all about and they got to talk to a bunch of people there.

“They got to do a traditional sweat the next day, Saturday, and so they were moving around a lot on the res. They got to see Potato Creek and areas. We always stopped at Wounded Knee on the way home and Pine Ridge hospital.

“I’ve been stopping there for years and we take in a big tray of cookies to the doctors and nurses, we brings tins of cookies to anyone in the acute care or just people in the emergency room.”

The items donated by the Estes Park community spread to more than the children and adults of the reservations. An annual gift comes from the Merry Marthas, a local sewing and crafts club in Estes Park, goes to the hospital.

“We bring the Merry Martha afghans — I hand those out on the acute ward, usually leave some for the obstetrics ward. Merry Marthas also have the little hats and mittens and outfits for kids. And we drop off bags of stuffed animals.”

Phelps and the students loaded up three vehicles and traveled to the reservation on Thanksgiving. The students of Eagle Rock come from a variety of backgrounds and places all over the nation. They have been exposed to many different experiences, but nothing could prepare them for the poverty they would witness.

“I told them ‘don’t hide, be present,’” said Phelps. “And a lot of them were way out of their comfort zones — way out. Some of the students are from wealthy families, some are from poor families and everything in between. But when you’re very poor like a lot of the folks on the res, and you’re so far away, you’re secluded in this area. Even the kids that might not come from wealthy areas, they are in cities, there’s always people around, there are facilities, you can always go to a clinic. When you go to Potato Creek, you’re in the middle of nowhere.

“Even now, a lot of the folks on different reservations will tell you they were definitely secluded by design to control them or to assimilate. And then, in the later years, the last decade or more… they realized some of the [reservations] have minerals on them. So now the native folks are fighting because the companies are trying to get back in to mine.”

While the Native Americans on the Pine Ridge Reservation struggle to obtain goods and services, “they are wealthy as far as community and family goes,” said Phelps.

“So you might not have the money and the services on one hand, but they are wealthy… in that if somebody needs to be taken in… people take care of each other.”

Phelps told the students, “sometimes we get insulated, so now you’re getting a feel for that. I think you’re bigger for it and your life will be fuller.”

Phelps has had a connection with the Pine Ridge Reservation for many years and depends on the Estes Park community for the annual gift-giving excursion. Phelps said the gratitude from the people there was overwhelming for the students.

“I want folks here to understand that while it’s poor in one way, it’s wealthy in another,” said Phelps. “All the folks I know don’t want pity or sympathy. We just do this because they are our brothers and sisters. You do good things for other people, whatever that is in your life. As poor as they are money wise, services, jobs and things, they are wealthy in other ways.”

Eagle Rock is a school for high school age students and a professional development center for adults, particularly educators. The school is a year-round, residential, and full-scholarship school that enrolls young people ages 15-17 from around the United States in an innovative learning program with national recognition. The Professional Development Center hosts educators from around the world who wish to study how to re-engage students in learning, keep them in school, get them graduated, and help them go on to make a difference in the world.

For more information, call Phelps at 586-7125 or visit www.eaglerockschool.org.

The history of the Pine Ridge Reservation is filled with stories of betrayal and violence. In 1868, the Fort Laramie Treaty gave a large expanse of land from the Missouri River to the modern Wyoming border to the Native American people to end Red Cloud’s war. Red Cloud, the only Native American war chief to defeat the U.S. Army in a war, brought his people onto the reservation and had been assured perpetual hunting rights in the Powder River Basin. The land was to be the Lakotas’ “as long as the grass grows and the sun shines.” And the people were happy. That is, until Custer found gold in the Black Hills.

In 1889 the federal government confiscated 7.7 million acres of the Black Hills. By this time the buffalo were nearly extinct. Their great war chief and spiritual leader, Crazy Horse, was dead, murdered at Fort Robinson while in custody. Sitting Bull had fled to Canada, then returned. On Dec. 15, 1890, he, too, was arrested and killed while in custody.

At this time the people had begun following a new religion. The Pauite prophet, Wovoka, told of a great flood. If the Native people danced the Ghost Dance until they dropped, they would be spared and the Whites would be washed clean from the land.

Lakota chief Big Foot was leading his people in the new outlawed religion when they were cut down by the U.S. Cavalry at Wounded Knee Creek on Dec. 29, 1890. Over 300 mostly unarmed Lakota were killed, including women and children, so that white settlers could take advantage of the rich prairies and the hills of gold. Big Foot’s people were left to freeze in the bitter cold.

Unfortunately, this wasn’t the only incident at Wounded Knee. Thirty years ago Native Americans were being abused and killed for their loyalty to a new group called the American Indian Movement (AIM).

A corrupt Tribal government in Pine Ridge began an intimidation campaign toward AIM members and supporters. In 1973, AIM attempted to fight back by staging a 71-day vigil at Wounded Knee, asking for the reinstatement of the Treaty of 1868 and an end to the violence and oppression of the people.

Over two months, federal agents and the corrupt tribal government aimed automatic rifles at the protesters, killing two Native Americans. At the end of the siege, the government promised AIM that they would listen to their grievances. But following one meeting with White House representatives, no further action was taken to support the people of Pine Ridge Reservation.

The Native Americans on Pine Ridge continue to live on a desolate land stripped of natural resources, barren of industry and employment possibilities. Cited as the poorest section in the U.S.