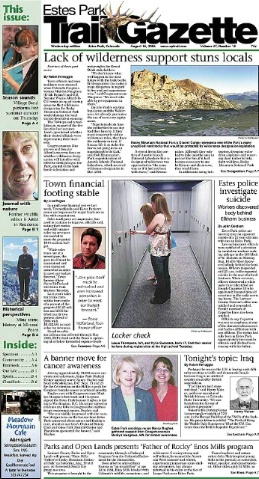 A new era in education will begin Monday when the first class of students arrive at Eagle Rock School.

Robert Burkhardt, director of the pilot education program underwritten by American Honda Corp., said he and his staff are eager for the waiting to end and the learning to begin.

Burkhardt said one of the guiding principles of the year-round residential school will be that everyone – students and teachers alike – will be partners in helping each other learn and grow.

The opportunities will be as expansive as the school’s 652-acre campus nestled in a valley below Eagle Rock, northeast of Estes Park off Dry Gulch Road.

The inaugural class will include two local students – Tammy Self of Pinewood Springs and Tony Hiatt of Estes Park.

Self, Hiatt, and their 14 classmates will embark upon a two- to three-year curriculum that will end with a double high school diploma. One will be awarded by Eagle Rock and the second by the students’ home school district.

The path from here to there will swerve among a mix of revolutionary educational approaches, community service projects, outdoor education programs, personal growth initiatives and lessons in socialization.

Burkhardt explained that the students were screened to select 15- to 16-year-olds who, for whatever reason, were having a difficult time learning in their former environment.

“Our belief is that this is the critical intervention that will make it possible for them to succeed,” he said.

Demographics will also plan in important part in the student mix.

Although the first class will be short of the goals in some respects, Burkhardt said the eventual makeup will consist of half Coloradans and half non-Coloradans; half boys and half girls; one-third rural, one-third urban, and one-third suburban; and with equal representations of Afro-Americans, Hispanics, Native Americans, Asian/Pacific Islanders and Caucasians.

In another step to put all of the students on equal footing, the school will supply clothes for the students so there will be no status games related to attire.

The teacher-student ratio for Eagle Rock is targeted at 1:5, but Burkhardt says the level will drop to 1:3 with the addition of visiting professors, teachers on sabbatical and educators in training.

Almost all of the Eagle Rock staff has had practical experience in public schools, but the new school will provide a revolutionary approach with an emphasis on individualized learning, Burkhardt explained.

Although each student (and teacher) will share experiences of a core curriculum, each student will also benefit from an individualized program of instruction geared specifically to the student’s career and/or education goals.

The introductory period will be intense, with almost every hour of every day planned by Eagle Rock leaders.

Burkhardt said a typical day will begin at 6:30 a.m. with group exercises, followed by “The Gathering” at 8 a.m.

The common meeting will be led daily by a different person, so it is unpredictable. But Burkhardt said it is also essential for the bending that will occur among students and staff as they share their feelings, gain a measure of self-confidence, and explore personal or worldly ideas.

The first week will include numerous trust initiatives, small group discussions and service work, which initially will include cleaning up the Eagle Rock campus.

Subsequent service projects will include erection of playground for the recreation district at Stanley Park, conservation projects in conjunction with Rocky Mountain National Park, and the U.S. Forest Service, and any other worthwhile activity that the students believe may help Estes Park or another town.

After a week of getting to accustomed to their new setting, the students will embark on a mandatory 21-day outdoor experience in the Comanche Wilderness Area.

Burkhardt said two groups, each with eight students and two staff members, will restore a meadow in the isolated backcountry.

The wilderness experience will be required of each incoming group of students.

Burkhardt said that after the students return from their outing, they will begin the more traditional classroom instruction, although nothing about Eagle Rock will fit easily into the “traditional” description.

“The kids will take responsibility for the decisions that will affect their own future,” Burkhardt explained.

“We want to put students in situations that create the need to learn things so that it’s easy to learn.”

While the students set their own pace, to a degree, the school itself will be a pacesetter for education in Colorado and throughout the United States.

Burkhardt said the school is working closely with the state to help define accreditation standards.

At the same time, the school will be involved in the process of becoming accredited itself by the North Central Association and the Association for Independent Schools. The latter group requires an accreditation period of up to ten years.

But Burkhardt hopes that the school’s ability to serve as a professional development center, in addition to a classroom for young students, will multiply the benefits that can be gleaned from an Eagle Rock education.

In the meantime, Monday can’t come too soon.