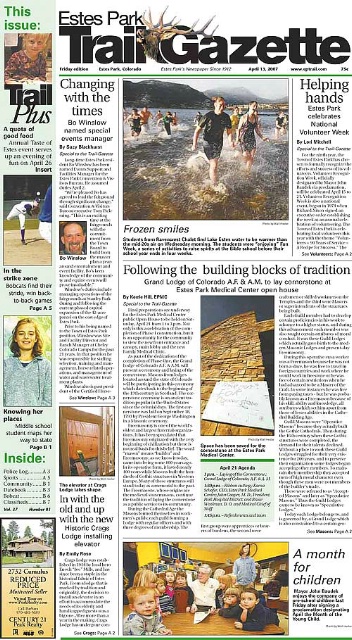 Ana Alarid entered Eagle Rock School in January of 2004 as a member of ER-32.She was hungry for a change in her life, and took advantage of everything she could while at Eagle Rock.One of Ana_s favorite experiences over her last three years was her wine internship in Northern California during ER-40.During her time in Napa Valley and Saint Helena, Ana worked as a crush intern, sorting grapes and making different wines.Ana_s desire to travel and explore has not been satiated by her time at Eagle Rock, and she has aspirations of traveling to Italy and South Africa after her graduation from Eagle Rock.College is also in the future for Ana.She is interested in studying anthropology and education at the university level.While she is known among her peers for her _dedication to her work_ and her constant desire to _expand on her learning,_ she has also been a strong support for some of her peers._She is the most compassionate person I know,_ said fellow student Ashley Trunck.

Rob Liddell will be remembered for a great deal at Eagle Rock School, not least of which will be his love of music. Since his arrival at ERS in ER-31, Rob has spent a great deal of time in the Schoolhouse exploring various instruments and music. Through the a cappella group, morning gatherings, and impromptu jam sessions, Rob has added music to the mountain air of Eagle Rock and Estes Park. In the words of his writing coach, Scott James, _Rob has contributed music as well as kindness and continues to grow exponentially in his time management abilities. He understands that the coursework at Eagle Rock goes beyond academics. He_s willing to work on himself._ Scott attributes some of his growth and success at Eagle Rock to L_Tanya Perkins, who has supported Rob through his Eagle Rock career. _I_m much happier with the person I am today than the person I cam in here as. I_m more self-confident and self-assured, and I know what I want from life more than I ever thought I would,_ says Rob of his time at Eagle Rock.

Sia Yang has been described by her mentee, Robert Miranda as, __a great mentor.A great role model._She is known within the community for her quiet leadership and quick mind.Her fellow graduate, Tah_nee, compares her to a Jerusalem Rose._Once you water her, get to know her, she let_s you in_she_s a beautiful, soft person, and nothing can break her._Sia has aspirations to attend college, and is a finalist for the Gates Millennium Scholarship.During her time at Eagle Rock, Sia has created opportunities to explore and share her Hmong heritage with the community, which led her to take on an instructor role in her last trimester.Throughout her time at Eagle Rock, Sia has been grateful to Eric, Donnie, L_Tanya and Dribin for their support.

Steven Maestas graduated with a rather short tenure at Eagle Rock, having enrolled in Eagle Rock from his home high school in Leadville, Colorado, only seven trimesters ago. As Tah_nee, his fellow graduate, put it, _He worked hard, fast, and efficiently._ Still, Steven found time to participate in the Guatemala trip in ER-39. He enjoyed his time abroad, and valued the experience of _living and working with the people_ in his community, and _not being another tourist. To see some places I never would_ve thought about going._ Because of his reserved nature, the public speaking course _Keep Hope Alive_ also ranked high on Steven_s favorite classes. The daily mini-speeches got him _out there,_ which he credits with making him more comfortable in front of groups. Steven_s looking forward to graduation, and says he_ll miss the people at Eagle Rock very much, but _not the work or the Eagle Rock beds._ The people at Eagle Rock will miss Steven as well. As his house brother Asha puts it, _He_s my idol._

Tah_nee Coleman has been described by fellow ER-41 graduate Steven Maestas as _always there for you when you need something._No doubt because of her willingness to help out community members of Eagle Rock, Tah_nee has been involved in many facets of Eagle Rock since she first arrived from Richmond, California in ER-29.She has traveled with the Close-up class in ER-25 to Washington, DC, and assisted the Professional Development Center by attending a conference in Florida aimed at examining the national dropout rate, and alternatives to expulsion.She was an inaugural member of the Eagle Rock a cappella group, and has consistently lived the Eagle Rock mantra, _find a need and fill it._When asked about her role models at Eagle Rock, Tah_nee cited the examples of Jazmin Campos and L_Tanya Perkins, _two strong women who always put business before pleasure_and got a lot accomplished._

The five ER-41 graduates have contributed a great deal to the Eagle Rock community during their time here, and have all taken a great deal from their time at ERS. We wish them the best of luck in their futures, and look forward to seeing and hearing from them in the future. Congratulations, graduates.