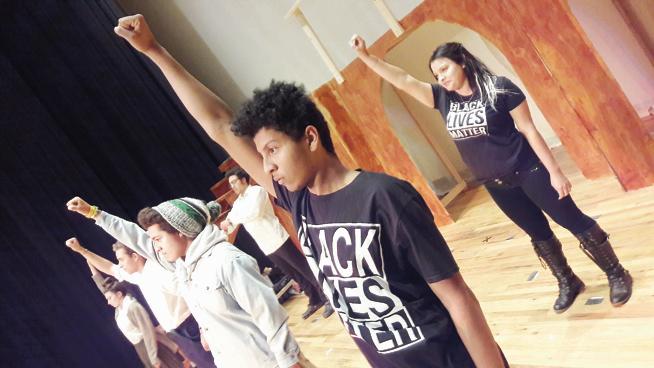 Meghan Tokunaga-Scanlon, music instructional specialist at Eagle Rock School, chose “Songs For a New World” as the school’s spring play very carefully. As written, the piece is more of a song cycle than a musical; all the music and lyrics were written by Jason Robert Brown. The overreaching theme of the piece is the finality of making a decision. “It’s about one moment,” said Brown about his show, “It’s about hitting the wall and having to make a choice, or take a stand, or turn around and go back.”

“Songs For a New World” opened on Thursday night and runs for just two more performances — tonight and Saturday — beginning at 7:30 p.m. in the Ruesch Auditorium at the YMCA of the Rockies. Admission is a donation toward the school’s graduate fund; duck race tickets to benefit the same fund will also be on sale at this venue.

The play is more of a song cycle than a musical and the overreaching theme of the piece is the finality of making a decision. (Barb Boyer Buck/ For the Trail-Gazette)

“I take the selection of musicals to be a long and intentional process,” Tokunaga-Scanlon explained. “It’s very important to me that my students see all of the roles they could play in theatre and in life, and how those affect one another, thus I often stray away from the traditional musical.”

She disagrees with the notion that all musicals are trivial and formulaic.

“I want my students to see that there are different and more complex roles out there besides ‘getting the guy,’ or ‘falling in love,’ or ‘once I get this makeover, everyone will love me and see me as valuable.’ These narratives are told over and over in the entertainment industry: plays, movies, musicals, TV shows, music…. and we’re conditioned to think that that’s how we need to act to be ‘normal’ or accepted.

“It’s important that students see all the different ways theatre can be; not just one style of narrative over and over,” she said. “I’m not saying love is a nonsense subject, it’s quite complex, but when all my girls want to play the love interest over the funny, loud girl who takes chances, it makes me think twice about the message I’m sending them. It’s showing them that funny isn’t attractive, that saying your truth isn’t desirable, and that relationships and attention are what you should aspire to most.

This year’s play takes on complex issues like identity, social constructs and privilege. (Barb Boyer Buck/ For the Trail-Gazette)

“Tokunaga-Scanlon encouraged the students to explore all aspects of their talents and interests. Boys don’t have to sing low “like basses to be considered a man” and students of color shouldn’t feel pigeon-holed into certain roles, she said.

“It’s important to me that my students see themselves in the stories and that they can find something of substance to relate to,” she said.

As with other plays she’s directed at Eagle Rock in the past, this piece tackles complex social issues.

“When we performed Spring Awakening two years ago, we learned about sexual health and relationships. When we performed The Wiz last year, we talked about the historical context and impact of the show. This year, we focused on identity, social constructs and privilege.”

The entire cast of the Eagle Rock School play “Songs For a New World.” (Barb Boyer Buck/ For the Trail-Gazette)

The music for “Songs” is powerful, complex and “different,” she said, and the format of the show gives her an opportunity to create several plot lines. “I love the idea of having to create an entire storyline and relationship with the audience in only one song vs. the entire show,” she said.

Tokunaga-Scanlon is the director and did most the choreography; two student stage managers (Marcus Wade-Prince and Mohammad Thabata) blocked and rehearsed a couple of the numbers along with Josue Quintana, her music fellow and assistant director. Local actress and producer Jenn Bass is the acting coach.

As a vehicle for expression and creativity, the participating students are responding positively to this experience.

Jafar Solorio (center) during a rehearsal session. (Barb Boyer Buck/ For the Trail-Gazette)

“This is my first show and I am going in with a bang,” cast member Jafar Solorio said, “The second song really stands out for me because it is showing history, the rough parts of our country’s past. This show expresses a lot of current events with nice-tie ins. This is our way to speak out against Trump, this is our voice.”

Carolina Avalos Diaz never thought she would be in a musical.

“I am a very shy person and it was always hard for me to even ask for my own food at a restaurant,” Diaz said. “Look at me now! I feel so accomplished and I am so thankful for being part of this cast.”

“Before I came to Eagle Rock, being part of a musical was a thought that never crossed my mind,” Evan Slavic said. “After being here for two years of being at this school, my confidence has improved greatly — so i decided to take a chance and join the musical. I discovered I have a passion and talent for singing and performing. I would like to show appreciation to my father for providing me with the love and support.”

Aviv Kirtner said, “this is my second musical at Eagle Rock and my confidence has gotten even stronger. Every day I learn something new about myself. This is such an inspirational musical and I am so happy to be a part of it.”

Tokunaga-Scanlon hopes the entire Estes Park community comes out to enjoy the show and is proud of her role in shaping the students’ development through art. “I hope audience members engage in an intentional performance, see all of the hard work the students have been putting in since December. I hope they’re moved enough to engage in productive dialogue that can spur change in our country. No matter what side people are on, I want this show to challenge ideas and perceptions and for the creators and receivers of art to have a conversation about what strikes them and why.”