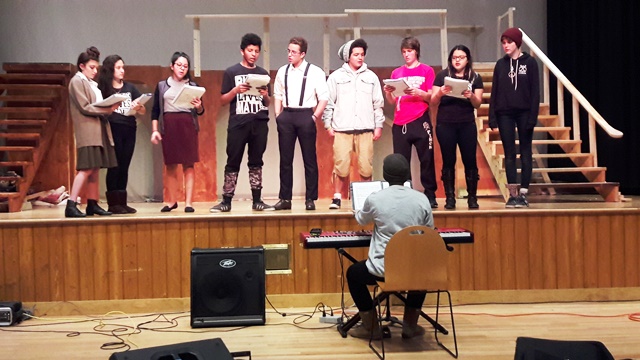 by Barb Boyer Buck
“Songs for a New World,” music and lyrics by Jason Robert Brown, will be performed by Eagle Rock School students starting Thursday.  The show will be presented at Reusch Auditorium at the YMCA of the Rockies, April 6-8.

Doors open at 7 and the show will start at 7:30.  Admittance is gained by donation in any amount to benefit the Eagle Rock Graduate Fund. “First produced in 1995, the show is a mix of songs Brown had written separately, or written for other shows ended up coming together and was his first show ever produced,” said Meghan Tokunaga-Scanlon, director.

“The show is more of a song cycle/revue that brings together four singers each on the moment of decision. Although there is some form of overarching narrative, most of the songs stand alone outside of the show.”