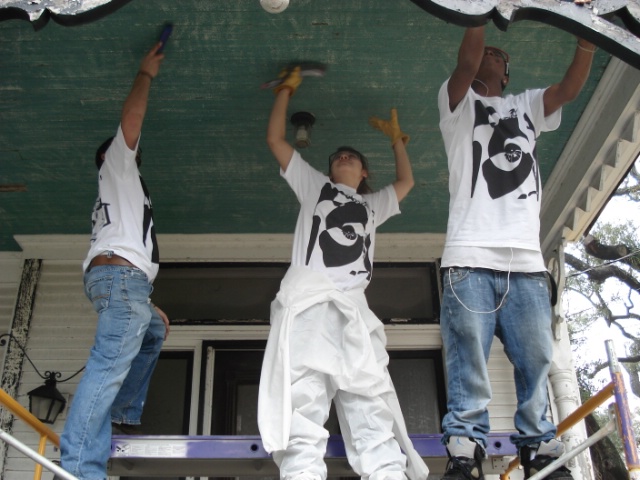 It was 6:30 AM on a Tuesday morning and eleven Eagle Rock students groggily rolled out of their sleeping bags, rubbed their stiff shoulder, and slipped into the same dirty clothes that they’d been wearing for the last four days before heading off to breakfast.

Sounds familiar doesn’t it? If you’re familiar with the Eagle Rock Wilderness experience then you may believe that this is a day in the life of an ER patrol. What you may not know is that this is actually a snapshot into the life of a group of Eagle Rock students who chose to take part in an 11-day service trip to Biloxi, MS and New Orleans, LA in order to provide service to the hurricane-stricken coastal cities. During this trip these 11 students and four staff members scraped and painted three houses and porches, created four pilot-project gardens, weeded a community garden, helped with the upkeep of a community/volunteer center, and painted a large mural behind a preschool.

Getting into ‘NOLA’ (the class name, which stands for New Orleans, LA) wasn’t easy. In order to be considered for the five-week class and corresponding trip, each student had to write a letter stating why they thought that they should be a part of this experience. With that done, each student then had to maintain a high standing in the community, which included such things as maintaining low dings, participating in classes, and helping to fundraise for the trip. Although the travel and living expenses were being covered by the school, each student was expected to raise $150, a sum totaling about $1700, which was given to families, organizations, and individuals along the Gulf Coast whom the group felt needed the assistance.

While fundraising was underway, students also participated in a class that focused on issues surrounding Hurricane Katrina such as the science behind hurricanes and the social responsibility of individuals and local and federal government organizations during disasters. Students also spent one day each week in the woodshop learning how to do simple framing, hang drywall, and spackle.

Once the group arrived on the Gulf Coast, Biloxi, Mississippi was their first destination. In Biloxi, the group lived for three days at a local church and worked with the East Biloxi Coordination Relief and Redevelopment Agency scraping and painting the porch of an elderly woman’s home. They then drove 100 miles west to New Orleans where they lived in a Christian community center in the heavily flooded neighborhood of Hollygrove. Here the group went to work breaking ground for pilot neighborhood gardens, scraping and painting houses, and doing clean-up and painting work at a local day care, which went on to include the creation of a mural.

All in all, the trip was deemed a success. While almost everyone was disappointed that his or her newly acquired building skills weren’t put to use, it was recognized that the work that was done was needed and appreciated. As stated by Renee, “When I heard we were going to garden, I was really upset because I felt it wasn’t helping to fix anything in NOLA. But seeing people’s reactions and how grateful they were to have a garden, I really felt like we did something good for people”. Moreover, it was the reactions and interaction of local individuals that really seemed to make the difference during this trip. “While in the middle of the project that we were doing in New Orleans I met this man named Terry and he was the owner of the house. After we had [done] the finishing touches up he always told us how much he appreciated what we are doing and that the world needs more people like us”, said Cherie, a student on the trip.

For others, it wasn’t so much the interactions with certain individuals, but the ‘Southern’ experience as a whole that made an impact. Adrienne explained, “For me, the trip did not end up being a ‘service’ trip. I found many things about the trip very valuable, but not the service aspect in particular. Time spent seeing and experiencing New Orleans (and the South, in general) exceeded my expectations.”

And finally, if the Southern hospitality, food, culture, and work experiences didn’t have a great enough impact, there is always the memory of the hurricane’s power and destruction. While trees and grasses are beginning to re-grow, there are still neighborhoods of nothing but the cement steps that had once led to homes. Even if a house did survive, the chance that the owners are willing or able to move back in is still slim. It is this graphic reminder of devastation that often has the most lasting impact. Brandon explained, “The trip was a very good experience. From all of the people I met and places I’ve been I would have to say that I learned how to appreciate some of the things that I have.”