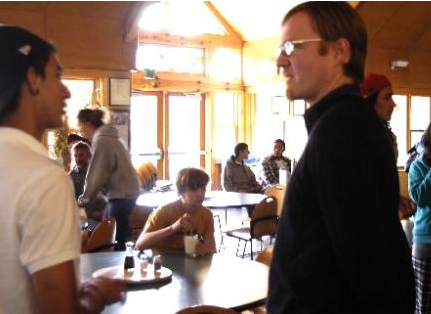 Author William Powers, from New York, challenged Eagle Rock students to define the American dream and then to downsize it to fit within a comfortable sustainability window. Powers was on a national tour last week, promoting his latest book, “Twelve By Twelve, A One-Room Cabin Off the Grid & Beyond the American Dream.” Eagle Rock was the only high school on the tour that includes college campuses and bookstores in Boulder, Colo., San Antonio, Texas, and Knoxville, Tenn.

TheWashington Post called Powers` book “enlightening and eloquent.” In introducing Powers, Eagle Rock teacher John Guffey said Powers gives us an alternative to the accepted American dream, a dream that he said is being challenged right here, right now, in this community of Eagle Rock. Guffey asked students to consider what the American dream would be like when they enter the work force, when things are very uncertain economically and internationally.

Guffey said Powers` history includes living and working abroad — in such places as Bolivia and Liberia — and as a journalist. Powers has lived in a 12 x 12 cabin in North Carolina, owned by a woman doctor, and presents a fascinating idea of a doctor with the means to live in a big house who chooses to live in a small one. Guffey said more such things are happening and he sees it as part of the American dream — “living into the future in a new way.”

Powers told Eagle Rock students he admires what they are doing to promote sustainability.

“We`re in a global ecological crisis,” he said. “I spent the last 10 years living among indigenous people around the world, in 60 countries, in West Africa and South America.”

He learned firsthand the effects of “our consumerism” on their lifestyles, he said.

Powers was inspired by speakers to “go out and change the world. We`re in a casino economy, with melting icebergs and overleveraged debt that we`ve inherited. There`s still a lot we can do.”

Many of the Eagle Rock students live already in a 12 x 12 (or less) space — their dorms, he pointed out.

Powers writes on his website, williampowersbooks.com, that the North Carolina physician, Dr. Jackie Benton, impressed him when he met her, because she was “stroking a honeybee`s wings in front of her 12 x 12, off-the-grid home on No Name Creek in central North Carolina. She struck me as someone who had achieved self-mastery in these confusing times, but discovering how she`s done this would prove to be a riddle intricately connected to the house itself. To my surprise, she invited me to stay, alone, in her 12 x 12 for a season.”

He told Eagle Rock students that 200 varieties of plants bloom around the home, delighting the senses. At night, Benton lights the area with a myriad of candles, so that “it looks like a giant jack-o-lantern.” There is no electricity in the small home.

“She has a carbon footprint of a Bangladeshi,” Powers said.

Although Powers, a senior fellow at the World Policy Institute in New York, lives in New York City now, he maintains sustainability where he can — does without a car and he plants a garden. He has learned to take sun showers, using a five-gallon vat of water, heated in the sun. He trades with neighbors for organic chickens.

He became interested in helping to change the world in 1998, when he was finishing up grad school at Georgetown. He started working for the Catholic Relief Services as an aid worker in a Liberian war zone. He ran a huge food pipeline. He met child soldiers, who were fed amphetamines through their faces, so they would be hyped to kill. The Liberians were harvesting their rain forests, so “we would have lumber at Home Depot.” Providing the food aid gave him an “incredible sense of accomplishment,” Powers said. Aid workers also helped put in water wells, latrines, ecological stoves so that people with a small supply of wood could heat water and swamp rice projects, so that the local people would “not slash and burn the rain forest.”

He called Liberia “American Africa — a part of our own country, founded by U.S. slaves.” Powers noticed that, amid the horrors of war, the people were still “living joyfully. Sometimes simplicity leads to that.”

After two years there, he transferred to Bolivia, where there was deep poverty and the people couldn`t even clear enough rain forest to survive. He encountered global warming — a ski resort above La Paz was turning the area into a desert, he said, melting the glaciers, which provided a water system for millions of people.

In five years working on the rain forest, they were able to conserve 3 million acres of it. Bolivia is “huge and it was a very interesting project,” he said.

The success abroad led to disappointment when Powers came home.

“It was like rearranging the deck chairs on the Titanic when I got home,” he said. “There was overdevelopment. I thought back to the native I saw, who was the last speaker of her language, when I saw the shopping malls…. Happiness does not increase with economic growth. People in America who`ve seen their incomes rise have not seen greater happiness. It`s like a crack house — we`re addicted to stuff, affluenza. We need more. Brazil, Russia, India and China are the new crack houses. But there`s a lot we can do, to create our way out of this. There are four pillars — taking care of yourself, your community and family, your nation and the world.”

He urged students to visit recycle.org and neighborhoods.net, to learn ways to recycle and borrow, and etsy.com to learn to shop locally. He suggested they look into taking internships in organizations that promote the environment, empower women and encourage disarmament.

“The World Policy Institute is always looking for interns,” he said. “There`s a lot you can do. Talk with your family and school about issues. It was sad to be in Boulder and (find) people talking about very superficial things, when there`s so much you can do. It`s an interesting time in history. There`s a choice. It`s the factory mentality versus organic. There`s a new vision — harmony with nature, cycles, permaculture. It`s about what space is enough, between over- and underdeveloped. Think about one thing you can do to find the contours of enough, and find joy in life in that way.”

Asked for advice he would give to teens, Powers said not to do what everybody else is doing.

“Stay maladjusted,” he said. “Maintain that integrity. Tune out media images of more and brands. Establish your own path. Follow your own bliss. Find your energy inside, blaze forward. Start small. Do one thing this year, two next and link up with others. You need to be a rebel, in a positive sense, in a unique way — like this school is. Don`t get sucked into the American dream as we know it, (where you will be) beholden and in debt…. I was going to participate in the system. I made the choice to do these things. You can make this choice as well.”

Powers donated two copies of his book to Eagle Rock. For more information, see his website at williampowersbooks.com.