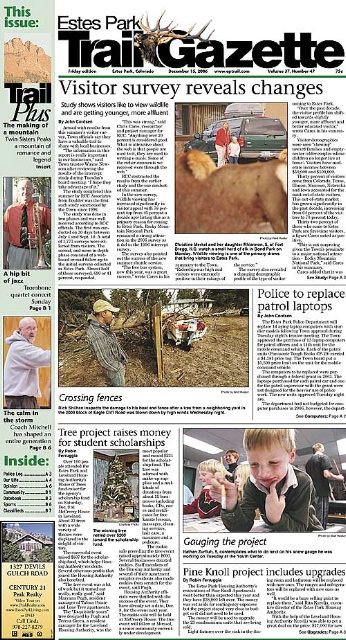 As ER-40, an especially large entering class, began their personal journeys to a high school diploma this trimester, one student concluded his Eagle Rock career this trimester by receiving his Eagle Rock diploma on December 15th, 2006.Eagle Rock_s 115th graduate, Bern Guthrie Lee has seen himself and Eagle Rock grow and change a great deal over the last few years.

Born in Santa Rosa, California, Bern moved to Eugene, Oregon at age 6, and has called Eugene home ever since.Though he is fond on his hometown, Bern was not making healthy choices as an adolescent in Eugene, and arrived at Eagle Rock in August of 2003._My mom told me about Eagle Rock School, and other people who I held in respect agreed, and I wasn_t doing anything, so I figured I_d give it a shot._

Bern joined Eagle Rock as a member of ER-31, and _knew I was academically capable, but I didn_t know if I_d make it through [to graduation]._The path to graduation was long, but Bern decided when he arrived that he needed to make a definite decision about his time at Eagle Rock, and he decided to see it through to a diploma.

During his time here, Bern took advantage of many extras that Eagle Rock has to offer.Two of his greatest highlights were acting and singing in the Sound of Music in ER-33, and starring as Harry Witherspoon in the Lucky Stiff production of ER-36.His vocal talent also landed him a spot in the Eagle Rock a cappella choir, which has been another one of his favorite activities here.

Beyond the music program at Eagle Rock, Bern has had an opportunity to explore his future career path through an internship.For three weeks in ER-39, Bern left the Eagle Rock community to attend the Colorado Rural Health Scholars program in Denver.Through labs, lectures, and shadowing in his internship, Bern decided certainly on medicine as his future career field.He is currently applying to several small liberal arts colleges, where he hopes to pursue a bachelor_s degree in political science or in a science/neuroscience major before continuing his education at a medical school.

Though his resume and activities are impressive, one of Bern_s greatest legacies is his leadership as a veteran student and his tremendous personal growth during his time at Eagle Rock.In the words of one of his peers, Heidi Bingham-Schofield, _Bern went from a sarcastic, annoying, unpleasant boy to a funny, intelligent, compassionate man._That funny, intelligent man has given generously to the Eagle Rock community, through his service on Peer Council, his time chatting with other community members in the lodge, and his quirky sense of humor, peppered with a British accent from time to time.

While Bern will stay busy over the next 9 months earning money for college, he says he will miss Eagle Rock once he_s left us, especially _the people and the mountains._ Despite the _drama,_ Eagle Rock is a product of its people