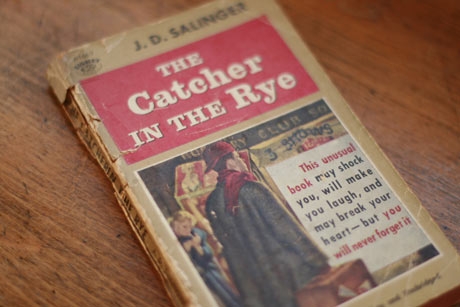 I’m sure that most of you are familiar with J.D. Salinger’s classic novel, The Catcher in the Rye, and its memorable protagonist, Holden Caulfield. I was drawn back to the book recently, thinking about the catchers in the rye that I’ve observed in schools.

Take a moment to revisit Holden’s poignant fantasy with me.

. . . I keep picturing all these little kids playing some game in this big field of rye and all. Thousands of little kids, and nobody’s around — nobody big, I mean — except me. And I’m standing on the edge of some crazy cliff. What I have to do, I have to catch everybody if they start to go over the cliff — I mean if they’re running and they don’t look where they’re going, I have to come out from somewhere and catch them. That’s all I do all day. I’d just be the catcher in the rye and all. I know it’s crazy, but that’s the only thing I’d really like to be.

You know, as I do, that there are many teachers who fulfill Holden’s dream. They help save kids who are heading toward the edge of the cliff. These are kids who aren’t looking where they’re going and who, even if not in immediate physical danger, are in danger of following a figurative path of personal destruction.

What I invite you to do is join me in making this post the beginning of nominating “catchers in the rye,” individual educators or entire schools that you know from your present role as an educator or as a parent, caring and vigilant protectors who consistently save kids from going over the cliff.

I don’t want to monopolize the process or cover my own list of individuals and schools who fit the description, but I would like to give a few amplified examples to get the ball rolling and, perhaps, make the criteria somewhat clearer.

Life Learning Academy (LLA) is a small San Francisco Unified School District charter school for at-risk kids. The 60 or so students have had problems with the law and/or have been in and out of a number of other schools. Many of these kids are headed for the cliff when they first enroll at LLA. Yet each year from nine to fourteen students graduate and go to college, trade schools or job apprenticeships. Many students irreversibly turn their lives around.

How do they do it? In part they do it with tough love. Certainly the most central driving force is the principal, Teri DeLane. On my first visit years ago, I heard her yelling at a kid in her office. “What the devil were you thinking coming to school dressed that way! Get the right clothes on or you’re out of here!” What inevitably follows this kind of challenge is a caring dialogue. In their graduation speeches most students say, “You were in my face, Teri . . . you were tough on me . . . but you really cared for me . . . and I love you.” Through her toughness and her love and the way she helps the rest of the superb staff create a community of caring, she is in the top echelon of my “catcher in the rye” list.

But here too, a reminder is needed. Despite all the kids Teri and her staff save from going over the cliff, they can’t save them all. A few years ago, some students from the school came to meet with my teacher trainees at San Francisco State. One African-American boy was so articulate and so wise in the perceptions he shared that my students were still talking about him the next week. A year later he was killed in a gang-related shooting.

There’s a memorable scene in Dangerous Minds, the film based on the experiences of LouAnne Johnson, in which a very troubled student says to her, “How are you going to save me from my life!?” And despite all her efforts, she ultimately can’t.

A Culture of Caring

Still, for every case like that, there are hundreds of cases of kids being saved.

More often, saving students from the cliff is less dramatic. Another image that comes to mind is a more typical one. I observe a teacher in inner city Hayward, California calling a parent on the phone in the middle of the day to find out why her daughter hadn’t shown up. The teacher was helping the girl navigate her schoolwork and her life. This same teacher, like some you know, frequently spends lunch hours meeting with students who come to her for personal help.

And a vivid image from Eagle Rock School in Colorado also comes to mind. At this exceptional school for at-risk kids, there are many catchers in the rye. It is my top nomination in the institutional catcher in the rye category. I can’t identify a single moment or interaction, because the catching of these kids is continual and an integral part of the school’s environment. But I do remember a conversation I had with a young woman who had gone from school to school, restlessly bored and without direction, and who was now writing brilliant essays and headed for college. She was very clear that she would have fallen off the cliff if not for the collective efforts of the staff at Eagle Rock and the environment they had created.

So now please share with us your nominees, your top “catcher in the rye” picks, so that we all can honor them for what they do to keep Holden’s dream alive.